Report: Steve Mills Could Be on His Last Legs as Knicks Executive 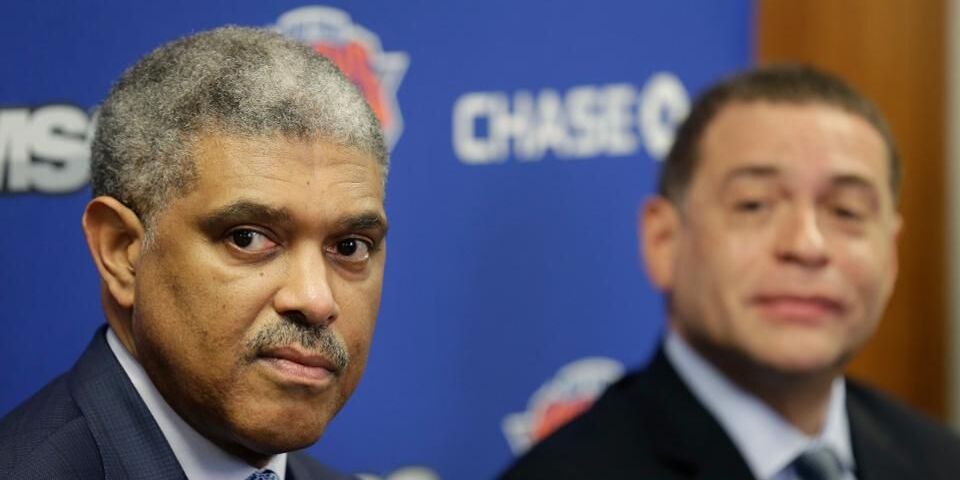 Knicks President Steve Mills has been with the organization for nearly sixteen years, but the longtime executive might not have much rope left.

One constant through multiple regimes running the New York Knicks has been team executive Steve Mills. The longtime presence in New York’s front office has been team president and served as general manager during Phil Jackson’s tenure. However, Mills could be on the chopping block, according to a new report from Ian Begley of SNY.

A source said last week that Mills and Perry are under significant pressure following the firing of head coach David Fizdale. If Mills is let go the Knicks will likely turn their attention to Toronto exec Masai Ujiri. Sam Presti also has fans within the organization.

The Athletic has reported that Mills will be reassigned or outright fired after the season. But sources say the situation remains fluid given the remote possibility of a turnaround from the Knicks. Mills has multiple years left on his deal, as does Perry. There’s also the possibility that MSG decision makers — including Dolan — could change their mind on Knicks leadership.

Mills’ tenure with the Knicks started in 2003, after which he departed in 2009. He later re-joined the NBA’s Big Apple franchise in 2013 as the chief decision-maker in the front office before serving as Jackson’s GM. Following the renowned coach’s dismissal by The Madison Square Garden Company’s chairman, James Dolan, Mills once again took the reins of the organization and brought Scott Perry into the fold in 2017.

Since then, the existing dynamic has been Mills as president of basketball operations and Perry as the GM. The two executives—who made history as prominent African-American leaders league-wide and across North American professional sports—hired former Memphis Grizzlies head coach and Miami Heat assistant David Fizdale in May 2018.

Following just one and a quarter seasons at the helm, however, Fizdale was removed as head coach a week ago after a warning message was declared by Mills following a 2-8 start in November. Neither Fizdale nor the team—made up of players Mills and Perry signed last summer—responded positively, going 2-8 again over the next 10 games.

Former G League Coach of the Year Mike Miller, promoted to the coaching staff in the offseason, was installed as interim head coach as the Knicks are mired in a 10-game losing streak, with a chance to snap it in San Francisco on Wednesday night.

Neither Mills nor Perry have directly faced media scrutiny, too, following the hasty firing of Fizdale, who appeared to be beloved by his players despite the Knicks’ awful record. The team had to release two public relations messages; the first, a short one officially announcing Fizdale’s dismissal, and the second one adding a short quote untethered to a front-office official thanking Fizdale for his time in New York and leaving space for the fired coach to speak.

Statements from the New York Knicks and David Fizdale. pic.twitter.com/5h7EevehlD

As the Knicks continue to spiral—a sophomore slump from 2018 draft pick Kevin Knox looks more routine than bumps in the road, Dennis Smith Jr. and Frank Ntilikina have been frequently criticized—there is growing sentiment that Mills and/or Perry will not be allowed to clean up their mess again this time. Instead, as Begley reports in SNY, the long-running confidant of James Dolan, known to serve the MSG chairman’s interests at heart, could be out of the door this season, with the Knicks’ owner searching for an executive up to the task of fixing the team, unlike the failed attempts of the current millennium.

One consistent name appearing in rumors is Masai Ujiri, the 49-year-old Toronto Raptors president who delivered the Canadian franchise its first and only championship. Dolan has long-coveted the Nigerian executive who once swindled the Knicks in the Andrea Bargnani trade. Ujiri previously worked in the Denver Nuggets’ organization, where he won the NBA’s Executive of the Year award in 2013.