For Mills and Perry, Complete Patience Isn’t the Sole Decider in Rebuild Success 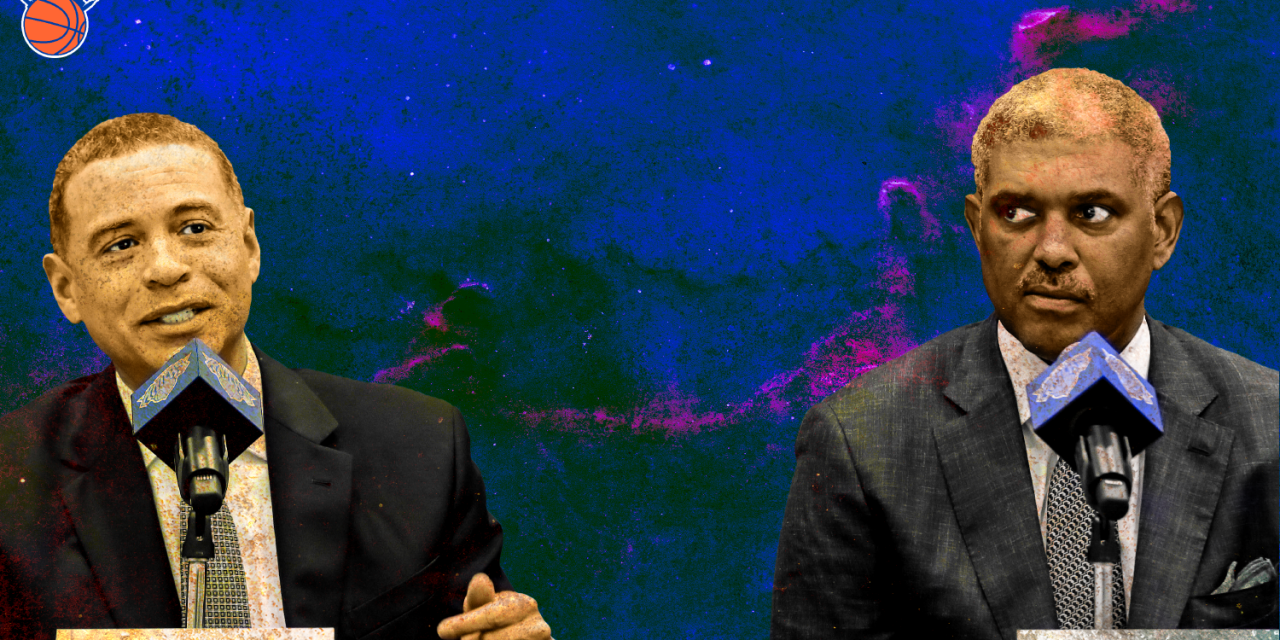 Scott Perry and Steve Mills have rightfully earned praise for their patient approach to a true rebuild. But patience can’t last forever, and sooner than later the Knicks need to benefit from shrewd moves.

At the Knicks’ town hall event prior to the start of this season, team president Steve Mills triumphantly declared “we are not going to trade our draft picks” to the delight of the fans in attendance. Of course, keeping your draft picks should be par for the course for any semi-decent franchise, but the rapturous applause revealed just how desperate New York Knicks fans have become for any modicum of competency from the front office.

Now with a successful draft under their belt, a finalized Joakim Noah situation, and some cap space cleared, the real test begins for the duo of general manager Scott Perry and Mills. Refusing to trade draft picks is low-hanging fruit; the true tests are on the horizon, however. Moving ahead, the duo of Perry and Mills will have to show a bit more guile to truly cement themselves as the reformed front office they posit themselves to be.

The Knicks have been plagued by a series of hyperactive front offices that tore things down just as quickly as they built them up, and a new, measured approach has been well-received. But for great front offices, the juxtaposed mantras of patience and aggression should ideally co-exist. Some are able to balance it perfectly (see Danny Ainge essentially outsourcing his tanking to Brooklyn, leading to simultaneous Eastern Conference Finals and top lottery picks in the same year).

Knowing when to strike and when to stay put is what separates good front offices from reactionary ones. Perry and Mills have taken an aforementioned (some would say much-needed) hands-off approach to the Knicks rebuilding and as a result, they’ve been anointed as franchise saviors (more Perry than Mills, to be clear).

But things haven’t gone perfectly, and some inaction has lead to current conundrums. Case in point: what happened last spring.

The pair hesitated on trades for both Kyle O’Quinn and Courtney Lee; they weren’t happy with the returns for their beloved vets and scoffed off any deals. Months later, it has likely proven to be a mistake. O’Quinn left for nothing in compensation in unrestricted free agency and Lee is stuck in limbo with a mysterious neck injury and a pending trade shrouding his season so far. Both players had career years last season, and there’s a strong argument that front office inaction hurt the team in the long run. Lee is now regarded as perhaps a (slightly) damaged asset and the Knicks are on the clock to move the veteran swingman.

Mills and Perry have also inadvertently created a referendum around the summer of 2019. With each loss, the fan base, the media, and the city each grow more expectant of fireworks next July—the names of top-tier players like Kevin Durant, Kemba Walker, and Klay Thompson have fans salivating, despite the lack of grounded plausibility for a few of them are more.

It all seems great on paper, but we’ve seen this before. Donnie Walsh preached patience almost a decade ago, as the Knicks attempted a rebuild with the likes of Danilo Gallinari, Wilson Chandler, and even Landry Fields but succumbed to the pressure when Carmelo Anthony became available.

Admittedly, the job given to this front office was unlike any other in the league. Not only were they expected to navigate through the ruinous cap deals of the past regime, but they were also burdened by the gargantuan task of repairing the image of a franchise on a nearly two-decade run of being the NBA’s proverbial punching bag.

On that note, Perry and Mills have performed superbly so far. They were heavily engaged and present in the draft process, they handled the coaching job search well, and they’ve avoided any major controversy surrounding Kristaps Porzingis’ contract extension, other than there hasn’t been an extension yet.

The Knicks are currently 5-14 and heading into a tough few weeks of basketball. It might be early, but the tank vultures are circling, and the murmurs of discontent from some of the vets could soon turn from whispers to loud statements. Perry and Mills need to be prepared to pull the right triggers at the right times for the future of the franchise.

They could be faced with controversial decisions, like an Enes Kanter trade or buyout. According to Marc Berman of the NY Post, Perry and Kanter have already had a “talk,” the subject of which is unknown, but one could take a guess given Kanter’s social media rumblings.

Secondary storylines like the recent re-emergence of Trey Burke bring out more questions about the direction of the franchise. Fizdale is on the record stating that wins don’t matter and it’s about development, but if the Knicks rattle off some surprising wins in the near future will the front office pivot? Could the franchise see the diminutive point guard as a real part of the core and not merely a sweetener in a much-needed Courtney Lee trade?

The sheer gravity of the decisions that Perry and Mills will have to make in the upcoming months should not be understated. They may be forced to decidedly steer the direction of the team as the season goes on. Is it more important to secure a top-five draft pick or prove to a free agent that we are a solid team on the rise by winning 38 games? Are the one-year tryout players worth some of the cap if they perform above expectations or are they merely filler for this season with a huge roster turnover coming in soon?

The decisions made this year will leave an indelible impact on the immediate and long-term future of the franchise. An injured franchise player is up for a max deal, a group of players on one-year deals are showing some promise, bona fide superstars are available next summer and there’s a draft that’s filled with a couple elite talents at the top. All of this on top of any myriad possibilities could have them feeling like Dr. Strange during Infinity War. But this much is clear after months of great rhetoric, it’s almost put up or shut up time. Caution has worked for the most part so far but continued inaction or a lack of real risk-taking may hamper the true ceiling of this regime.

In the meantime, here are three specific situations that will shape their success in the coming future.

How will they handle Kristaps

How the Knicks decide to deal with their franchise player’s contract amid injury recovery will be interesting to say the least.

Stephen Curry is a good litmus test for excellent team management. His early ankle injuries led to a five-year, $55 million deal from the Golden State Warriors. The franchise demonstrated incredible tact with the offer, which paid dividends long-term in three—maybe four—championship rings.

The Warriors struck the perfect balance. Instead of low-balling Curry, or fearfully handing him a max on a silver platter, the Golden State’s front office essentially struck gold. It was a calculated risk, and the results couldn’t have been more spectacular.

In recent years we’ve seen the 76ers give Joel Embiid a contract littered with health clauses. Will Mills and Perry be bold enough to offer KP something similar, or will they succumb to the pressure and appease our giant?

We know the rumors by now. The Knicks are one Courtney Lee trade away from Kevin Durant and a bevy of other max candidates—it’s that simple, right?

If the Knicks are unable to lure a top free agent, Perry and Mills will be faced with a laundry list of options. Do they look to keep a lot of the current one-year guys? Do they overpay a mid-tier free agent on a short-term deal? Or do they panic and max a second tier free agent?

Are Perry and Mills truly prepared to stare down a disappointed New York media and fan base and extol the virtues of constructing a new, different roster?

How creative can they be with their cap space?

How the Knicks use cap space, in general, will be telling. Cap space is more than free-agent bait; it’s flexibility. Should the Knicks strike out of free agency next year and will the talk of patience be for naught? Or will they utilize cap space to take on bad contracts, collect more draft picks, and remain engaged? The last point is something New York’s leadership has largely not done amid its—their words—slow rebuild. One-year fliers on guys like Noah Vonleh and Mario Hezonja are good, sure, but absorbing bad contracts attached with draft picks incentives could increase the chance on hitting on those player bets.

Sean Marks largely repaired Brooklyn on the back of cap space by absorbing bad contracts for draft picks. There’s more than one way to build a roster, and Perry knows this first hand. He started his career in the NBA as part of a Pistons executive staff that turned a mishmash of pieces—then–lottery bust Chauncey Billups, hothead Rasheed Wallace, and the undrafted Ben Wallace—into a whole greater than the sum of its parts.

Perry and Mills should endeavor to become the San Antonio Spurs of the East: consistent success, strong values, and a developmental haven.

You know that gut feeling that the Spurs could roll out anyone and they would produce? That’s what the Knicks should aim for; not merely quick fixes via the Russian Roulette of free agency but a culture that can last beyond any one player or group. The Knicks need to prove that culture is more than a buzzword. They need to develop a binding ethos that permeates the organization. That’s when you’ve truly turned a franchise around.


This article has been updated since its original publication.