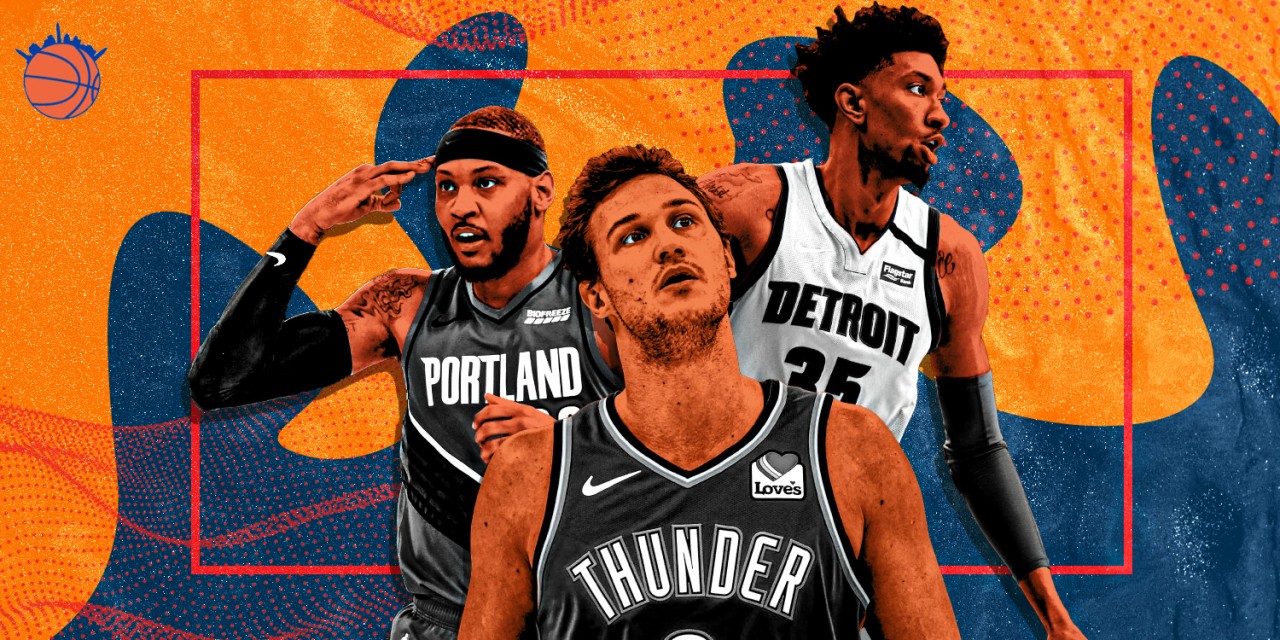 Given reports of a need for shooting at the four spot, don’t be surprised if the Knicks move Julius Randle and replace him in free agency.

The New York Knicks need three-point shooting like…well, what’s the opposite of a hole in the head?

The Knicks had some of the worst spacing in the NBA last season, which didn’t bode well for rookie R.J. Barrett, who was passed up for virtually every major rookie accolade known to man. It was also a problem for burgeoning big man Mitchell Robinson, who didn’t have the requisite lanes to thrive as one of the league’s best up-and-coming vertical spacers. In short, both of the Knicks’ most promising players could use some complementary shooting—particularly from the four spot.

Despite hailing from two separate Knicks regimes, ex-head coach David Fizdale and new team president Leon Rose both stated, in separate appearances, that the Knicks’ biggest need going into next season is a four-man who can stretch the floor. This, of course, is pretty ironic, considering the much-maligned Kristaps Porzingis trade just a couple of seasons ago, but this is the New York Knickerbockers we’re talking about here.

The human whirling dervish otherwise known as Julius Randle certainly wasn’t the answer last year, and it looks like Rose and co. could look to move on a year early from the ill-fitting power forward. They could feasibly do it through the draft, but this draft class, while considered deep, isn’t particularly a strong one. While hindsight might prove to be 20/20, there is also a myriad of options the Knicks can look at in free agency. Considering New York is in the midst of a rebuild and also unlikely willing to eat up their precious cap space a year ahead of a highly anticipated free agency, things might be a little tricky.

Still, New York needs to find three-point shooting and ASAP, as the development of their young players essentially lays in the balance. So without further ado, let’s look at some of the more realistic free agency options the Knicks could consider this offseason; without mortgaging their future in the process.

When it comes to modern-day stretch fours, you can’t leave sharpshooter Danilo Gallinari off of the list. The former Knick—who was the centerpiece of the Carmelo Anthony trade way back when—last donned a New York jersey as a defensively flawed small forward. But the 6’10” Gallinari now makes his living stretching the floor as a power forward, and he’s flourished.

Last season with the Oklahoma City Thunder—one that was widely considered a throwaway year before the season started—Gallo averaged 18.7 points per game on 40.5% shooting from the three-point arc. He was a huge reason the Thunder over-performed this season, coming a game short of knocking off the Harden and Westbrook-led Rockets.

Of course, there are plenty of downsides to signing Gallinari. He likely won’t come cheap, and the Knicks will absolutely have to overpay. And at 31, he doesn’t necessarily fit the Knicks “timeline,” so to speak. But his ability to stretch the floor is invaluable, especially considering the newfound space Barrett and Robinson will have. Perhaps an exorbitant one-year deal with a team option will do the trick.

All things considered, Bertans would be the crown jewel of sharpshooting fours for the Knicks. At 27, he fits better with a rebuilding Knicks team than Gallinari, and he’s the better shooter, too. Bertans averaged 15.4 points per game last season on a 42.4% three-point shooting percentage. While he only shot exactly one percent higher from the field, Bertans is only going into his fourth season and has room to grow on a young Knicks team. Plus he’s a former Popovich-coached player, which certainly can’t hurt.

If it sounds too good to be true, that’s because it probably is. Bertans is set to be an unrestricted free agent this offseason with Phoenix and Atlanta also expressing interest in signing the Latvian Laser. The only way the Knicks can get him would be signing the sharpshooter to a lucrative long-term deal. All things considered, signing Bertans to a Tim Hardaway Jr.–esque contract—or worse—could prove to be disastrous for New York.

Jerami Grant almost feels like the Fred VanVleet of power forwards. A relatively unsung second-round draft prospect back in 2014, Grant is still just 26 years of age and improving. He’s a scrappy, tenacious, and unsung rotational player for a Nuggets team in the midst of a historic Western Conference playoff run. Grant averaged a career-high in both points (13.5) and three-point percentage (39.2%) last season with the Oklahoma City Thunder and has followed it up with a solid 12 points per game and 38.9% three-point percentage coming off the bench for a deep Denver squad in 2020.

While Grant has dramatically improved offensively, defense is still his bread and butter. He’s shut down some of the top stars in the Bubble, ranging from Kawhi Leonard and Paul George to Anthony Davis and LeBron James. His versatility on defense makes him the ideal stretch four for the Knicks, as Grant can guard all five spots on defense. His combination of intangibles, improved outside shooting, and overall basketball I.Q. makes him a perfect fit on a Knicks squad full of impressionable neophytes.

However, Grant looks like he will ultimately get overpaid in free agency following a strong playoff performance with Denver. We don’t think it would be a Jerome James or Channing Frye–type disaster for New York, but with the Knicks’ luck, I wouldn’t rule it out, either.

Of course, the Knicks could always reunite with Marcus Morris, who took on the challenge of playing for a moribund Knicks franchise in the midst of a rebuild. Morris was a fan-favorite in New York, and the Knicks were able to parlay his career-best scoring season (19.6 points per game on an insane 43.9% shooting from the arc) into a late-round draft pick from the Clippers. But with Morris’ contract expiring after this year, it’s been widely speculated that the Knicks and Morris could pursue some type of reunion.

However, the Knicks are under new leadership since the amicable midseason trade, and it’s fair to wonder if they value Morris as highly as the old guard. He’s a bit older at 31, but perhaps more concerning is his tendency to hold onto the ball for too long. A ball-stopping, undersized four isn’t necessarily conducive to this young Knicks’ team growth. But considering Morris played most of his minutes at the three for the Knicks last season, he could settle in as a catch and shoot four-man in a brand new New York offense. One that, hopefully, doesn’t involve playing three power forwards in the same lineup at once.

Christian Wood has been another name that’s been floated around with the Knicks. Wood had a career-best season last year—particularly after Blake Griffin went down and Andre Drummond was traded to the Cavaliers. Wood averaged 13.1 points and 6.3 rebounds in just over 21 minutes a game. He also shot a career-best 38.6% from three and an ultra-efficient 56.7% from the field. While not necessarily a strong defender, Wood certainly showed flashes of energy and effort.

However, Wood did most of his damage from the center position last year. Not to mention the fact that the Pistons were, for lack of a better term, complete garbage when he entered the starting lineup at the end of the year. A stat-stuffing out-of-position player might not be the best plug-and-play option at the four next season for the Knicks, especially if he commands a big salary in a weak free-agent class. In that case, we essentially have Bobby Portis 2.0. But the D-League player is still an intriguing option, nonetheless.

Millsap might be a bit of a “stretch” (no pun intended) for the Knicks, considering he is 35 years old and on the backend of his career. He’ll probably prefer to re-up with the Nuggets or sign with another contender. But the versatile Millsap hit a career-high 44% of his threes last season and proved he could still effectively guard fours and fives. He might just be the perfect veteran mentor for a young Knicks team devoid of shooting.

Ibaka is officially an NBA champion, and the Knicks could certainly use one of those. The 31-year-old seven-footer averaged 15.4 points per game and shot a career-best 38.5% from the three. His 8.2 rebounds were also the second-most in his career. But Ibaka, at least at this stage of his career, is better at the pivot spot. Using him as strictly a stretch-four might not be the best way to utilize his increasingly modern skill set.

Last but not least, we can’t mention the man, the myth, the Syracuse legend himself, Carmelo Anthony.

‘Melo experienced a bit of a career renaissance last season after remaining unsigned throughout the majority of the 2018–19 season. A svelte Anthony averaged 15.4 points and shot a respectable 38.5 percent from three in his comeback year and proved to be an effective role player and complementary piece on offense. And considering Anthony’s best season on the Knicks was as a stretch four under current Knicks’ assistant coach Mike Woodson, the stars almost seemed aligned for a ‘Melo reunion.

But the Knicks also, well, suck, and last time I checked, Carmelo still doesn’t have a ring. The fit isn’t ideal, but Anthony seems open to finishing out his career with the Knicks.

Hopefully, however, that’s a little further down the road. At least for Carmelo’s sake.