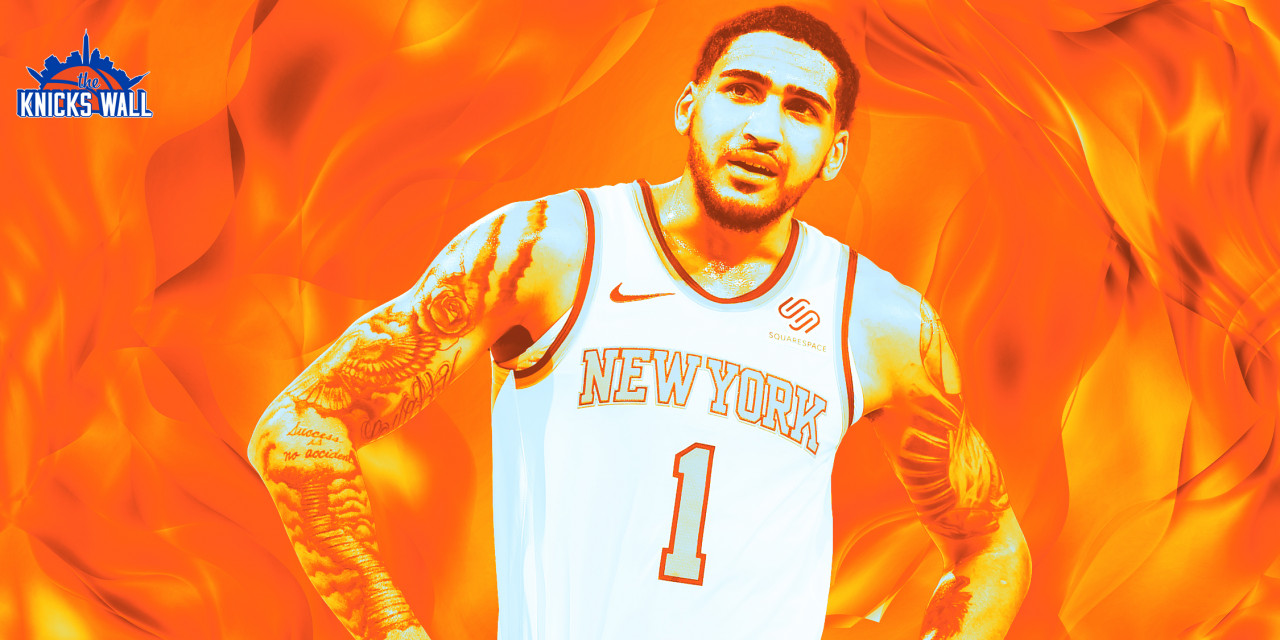 Improved point guard play on the roster and better shooting should help Obi Toppin step forward in year two with the Knicks.

Last season was a rough one for eighth overall pick Obi Toppin. After missing the beginning of the season with an injury, Toppin came back and didn’t quite win a spot in Thibodeau’s rotation. Rather, fighting an uphill climb for playing time as Julius Randle put the finishing touches on a breakout campaign, Thibodeau’s lead lieutenant, Taj Gibson, saw minutes as his backup. Even he gained momentum near the end of the season, former Dayton Flyer averaged 4.1 points, 2.2 rebounds, and shot 49.8% from the field.

But the numbers failed to do Toppin any justice. Adjusting in his rookie season, Toppin played more like a big wing, catching and shooting on the perimeter, rather than his natural role as the roll man in the pick-and-roll, using his size to seal and get easy dunks at the rim. Though poor coming out of school, his defense looked fine, if not neutralized by the talented defenders and system, and his energy off the bench is infectious, as evidenced by the Hawks series.

So far in the 2021 Las Vegas Summer League, Toppin has looked good with two 20-point games against the Indiana Pacers and Toronto Raptors, then a double-double, 17 points, and 11 rebounds against the Los Angeles Lakers. The jumper looks more compact, and he’s even broken out a few good low-post moves, showing a back-to-the-basket game and a solid face-up game as well. It being Summer League, of course, Toppin has been able to get some easy dunks along the way, but all in all, he looks too good for Summer League, and at 23 years old, that’s a good thing.

So clearly, there’s a good player there. It may not be someone worth the eighth overall pick, but a fine NBA player, capable of serving as a backup to your best player. Can the Knicks right the ship out with Toppin in year two?

One of the minor frustrations about this past offseason was the gridlock of the center position. Between Nerlens Noel’s return, Mitchell Robinson working on what could be a contract year, Taj Gibson’s ability to handle both power forward and center positions, and emerging rookie Jericho Sims dunking—and showing a budding floor game—everything in sight in Vegas, the center position is the last position that needs another player into the depth chart. Meaning, Obi Toppin doesn’t see a ton of minutes at center unless the Knicks are in emergency mode at the position.

Could sticking him at just power forward be a good thing for Toppin? For Obi, getting minutes is key, but you don’t want him running around out there without much of a goal. We’ve seen how that can stall a young player’s career. Toppin seems destined to spend the overwhelming majority at power forward with the upgrades on the roster, but not without the proper player around him.

The combination of Toppin and Robinson could be intriguing as the Knicks can cover Toppin’s defensive miscues with an eraser behind him. On the offensive end, however, is where the pairing could really shine. Not only can Toppin shoot the ball and thus, create some spacing and some levity on a pick and roll, but he’s also a decent passer as well, capable of finding players in the corners or rolling at the rim. That could lead to some easy finishes for Robinson as Toppin can find him as a lob threat if the defense decides to focus on him.

The daunting amount of shooting and creation around him works well too. Newest Knick Evan Fournier could not only shoot it from deep but has some capabilities as a secondary ball-handler, which could allow more space for Toppin to operate. Alec Burks is more of a self-creator, but the emerging Immanuel Quickley as a ball-handler will be key. Quickley, while not handling the point guard position yet, could offer another creator, whose shooting could bend the floor, making the job of a Toppin easier.

The point guard position is where the Knicks vastly improved this season, retaining Derrick Rose, adding Kemba Walker after getting released by Oklahoma City, and selecting West Virginia’s Miles McBride in the second round of the 2021 NBA Draft. The result is a stronger point-guard rotation. Still, more importantly, the Knicks removed Frank Ntilikina and Elfrid Payton from the roster and removed two low-level to poor shooters off the roster for more consistency.

We’ve already seen Rose and Toppin together, as Rose used his minutes to be a change-of-pace guard, knifing through the defense and creating shots for others. Toppin was one of the beneficiaries. He would either assume a wing shooter in transition alongside Rose or work as a roll man off the pick-and-roll, allowing Rose to have an easy target roaming to the rim for an easy two points. As Rose assumes that same role again for the 2021–22 Knicks, Toppin might be the biggest benefactors in Rose’s return.

ROSE WITH THE NO LOOK TO OBI FOR THE SLAM pic.twitter.com/o2AsQCuigI

Slot Walker into the Payton slot, and you’re adding another dynamic into the mix. Not only was Walker a better driver than Payton, capable of bending the defense and using his gravity more effectively, but he’s also a better shooter. Walker’s shooting ability once again opens up the floor for Toppin to operate, using him in dribble handoffs, screen and roll, and anything to get Walker the ball, allow him to make space and dump it off to a waiting Toppin. Again, this works in transition, as Toppin could receive outlet passes as New York turns defensive success into offensive baskets.

Obi Toppin had a rough start to his rookie season, but it ultimately played well as the Knicks got into the season’s final months and in the postseason, to the point where fans wanted him to play over the likes of Nerlens Noel and Taj Gibson. In his second season, New York’s rotation is a bit more steady, meaning Toppin will have to earn more minutes. With better point-guard play, better passers at other positions, more shooting around him, and two ideal centers capable of covering up any of his mistakes, Toppin could not only take advantage of his situation in year two but could blossom into the player the Knicks envisioned as a second-unit scorer.