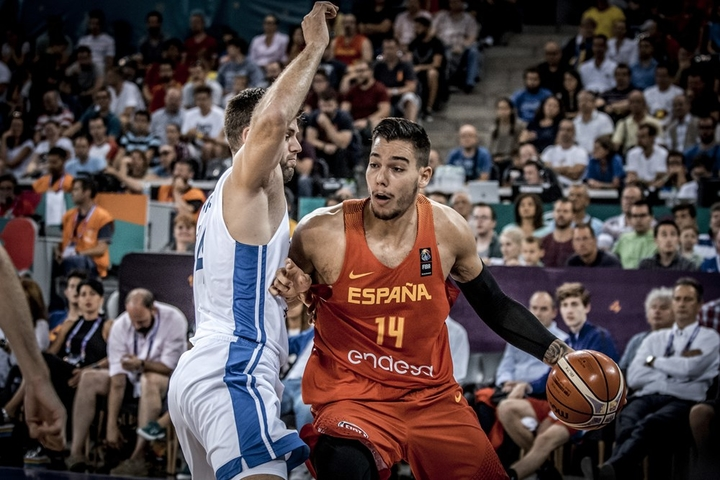 The EuroKnicks spent their summer ballin’ out in FIBA EuroBasket. Could their progression translate to the NBA?

The legend of the EuroKnicks is beginning to take shape. With the successful escapades of Mindaugas Kuzminskas, Willy Hernangómez, and Kristaps Porzingis in FIBA EuroBasket 2017, the fruits of their labor are slowly starting to ripen. Each player’s respective country performed to varying levels of success, but each of these guys had an impact that was eye opening for international fans and NBA fans alike.

EuroBasket is an excellent chance for players young and old to showcase their abilities on the national stage. The talent level across the tournament was fantastic, with 19 of the 24 teams featuring either current or former NBA players. Not to mention, the games were fun as hell to watch. The majority of the upper tier teams, most notably Latvia and Spain, were incredibly unselfish, and featured some jaw-dropping ball movement. During the EuroBasket tournament, players assisted on 67.2 percent of their teams buckets; in the NBA last season, players assisted on just 57.9 percent of field goals made. The game is simply different. I would like to thank WatchESPN for streaming these games and inevitably distracting me at work.

On to the main event, though: the play of the EuroKnicks. Whenever an NBA player is participating in any sort of competition that doesn’t feature the same intensity and athleticism of the Association itself, it’s important to take it at face value. However, there’s no reason why we can’t get excited about a KP block, or a Willy footwork extravaganza, or even a Kuz three ball! Say it with me, #EUROKNICKS! 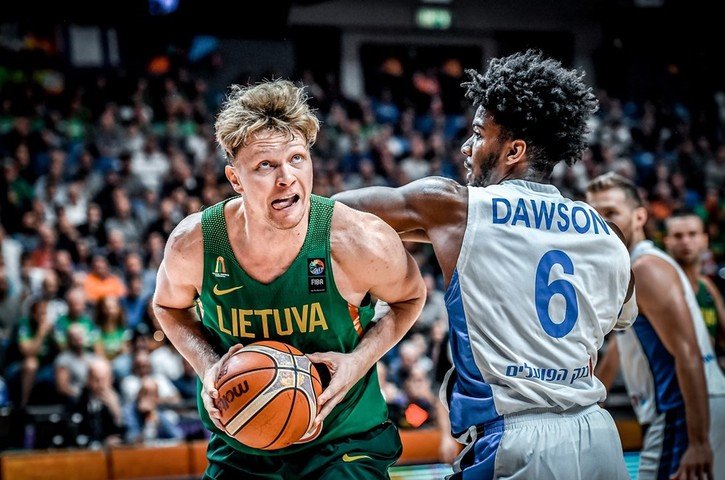 Let’s start off with the guy that can has an easy ceiling to project. At this stage in his career, Kuz’s game is what it is. He likes to cut off the ball, shoot the three, and grab some offensive rebounds. It’s been just a year and change since we knew nothing about Cheese, and look at us now. Best friends forever.

Kuz is the perfect player for EuroBasket and international play in general. He was Lithuania’s primary wing scorer, putting up 15.3 points and 4.5 boards across six games, including dropping a 20 spot in their disappointing loss to Greece in the Round of 16. When you watch his highlight reels, you’ll see a lot of back-door cuts, a skill I noted was one of his defining traits coming into the NBA last season:

Unfortunately, the Knicks didn’t exactly have guards that were capable of finding Kuz in these type of spots. Maybe the four-headed monster of Jarrett Jack, Ramon Sessions, Frank Ntilikina, and Ron Baker will allow him to get these type of easy finishes around the rim.

One can dream, alright?

Another staple of Kuzminskas’ EuroBasket reel is his ability to put the ball on the floor and take it to the hoop with authority:

Kuzminskas did a great job during his stint in Europe at surprising his defenders off the dribble. He went to his left quite often, lulling his counterparts to sleep before attacking the rim with a vengeance. For someone like the Kuzmeister, his lack of strength and true athleticism doesn’t negatively impact him to a large degree while playing against fellow European players. In the NBA, where the bodies of many players are more refined and he is not the focal point of the offense, he has struggled to find his off-the-dribble game. Perhaps a year of seasoning and some EuroBasket burn could help him out. More likely, though, Kuz will need to do one thing better than he did last year if he hopes to establish himself as a reliable rotation option: shoot from deep.

Since the same driving lanes that open up for him in Europe aren’t going to be there often in the NBA with the defensive intensity revved up, Kuzminskas’ game needs to be stronger from beyond the arc. He has a bit of a sluggish release with an obvious tell, which means defenders can easily close out on him. Inconsistency plagued him during his first season in New York, as he connected at polarizing percentages depending on the month. He knocked down threes at a 38.7 percent mark during the first half of the season, only to see that number dip to 25.9 percent for the final 41 games. He has the shooting gene in him, he just needs to make sure he can channel it more often.

He did finish in the 57th percentile of spot up shooters last season, per nba.com/stats, but he only connected on 32 percent of his long balls for the entire season. It would be a welcomed sight if he could push that number up a few ticks and hit league average. His future as a viable NBA player may depend on it. 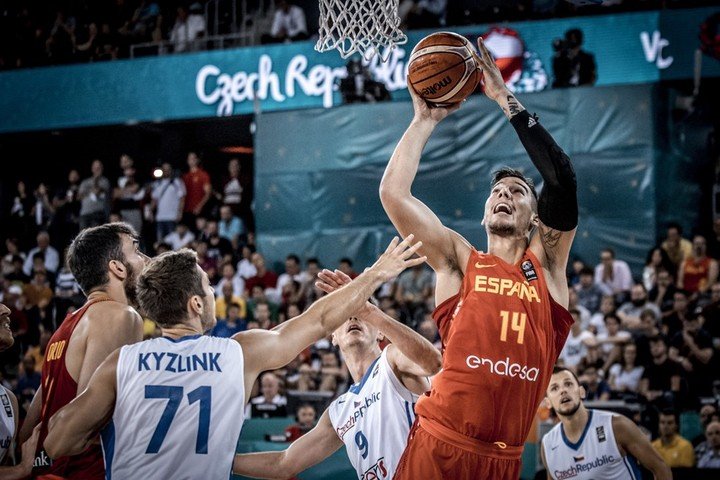 The maestro himself. While playing for Spain, there were a couple of roadblocks named Pau and Marc that prevented Hernangómez from assuming a large role on the squad. Even with the presence of the Hermanos Gasol, Willy still managed to average 7.6 points and 5.9 rebounds during his nine game stretch in EuroBasket. Before he was chained to the bench for most of the last four games, he was putting up 10.6 points and 8.6 bounds. Not too shabby for a 23-year-old on one of the best national teams in the world.

Willy’s post-game exploits are well documented at this point, but he’s left something to be desired when it comes to efficiency. Despite what our eyes tell us about his expertise, Hernangómez averaged just 0.67 points per possession last season in the post, sandwiched in between the likes of Georgios “Give Me Strength” Papagiannis and Nenê “I’m Not Grabbing That Rebound” Hilario. The Spaniard’s post up numbers are bound to increase with time, as Willy’s footwork and ability are simply too good for him to not show improvement. Beyond his post work, he showcased his prowess for nabbing boards, and even featured a bit of a flair for the dramatic:

In addition to channeling his inner Steve Nash, Hernangómez did his thing on the block, posting and toasting Nikola Vučević with a beautiful fake here:

Nothing we haven’t seen before, right? The man is a wizard. His offensive polish is commendable. My concerns on this end of the floor with Hernangómez have long resided in his ability to perform these type of moves against stronger, more stout competition. No one would call Vučević an above average defender. Hell, is he even average? Either way, in order to become the stud that many Knicks fans would like him to be, he needs to improve his efficiency in the post, and perhaps his ability to connect outside of the paint. Out of his 400+ field-goal attempts, 70 came outside the paint, and he connected on just 18 of those shots.

Above all else, the anxiety about Hernangómez’s game comes on the defensive end, where his struggles are evident. Jonathan Tjarks over at The Ringer highlighted the Hernangómez brothers just last week, examining their impact on Spain’s team and the outlook on their NBA careers. He is more bullish on Juancho thanks to his “3-and-D” potential, while he is bearish on Willy because of his defensive mishaps:

I’d agree with him. Despite the love I have in my heart for Willy, his defensive deficiencies are worrisome. Tjarks notes that opposing players finished at a 59.6 percent clip in the paint against Hernangómez, a number that will need to decrease if he is to dissuade defenders from entering the paint. Sure, KP can cover up some of these issues, but not all of them. He can’t magically turn Willy’s post defense or pick-and-roll defense into a usable asset overnight. Last year, Hernangómez would often bite on pump fakes, so grounding himself a bit more and gaining strength will pay off in spades if he keeps working at it. He may never be a difference maker defensively, but strides need to be made to get him up to average.

In the meantime, we have this to look forward to on the offensive end:

THE PASS! THE REBOUND! THE FINISH! Gimme gimme. 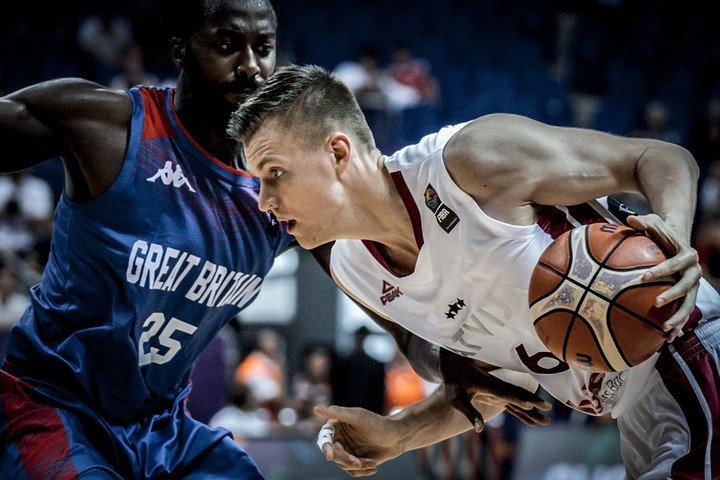 Don’t worry folks, I’ve saved the best for last. KP was nothing but a damn stud while in Europe, leading Latvia to the quarterfinals where they were bested by future Knick Luka Dončić and Slovenia. Porzingis was able to perform so well in no small part thanks to his GAINS. Seriously, Porzingis is looking brolic, pumped dragon, Nestle Swolhouse…you get it: 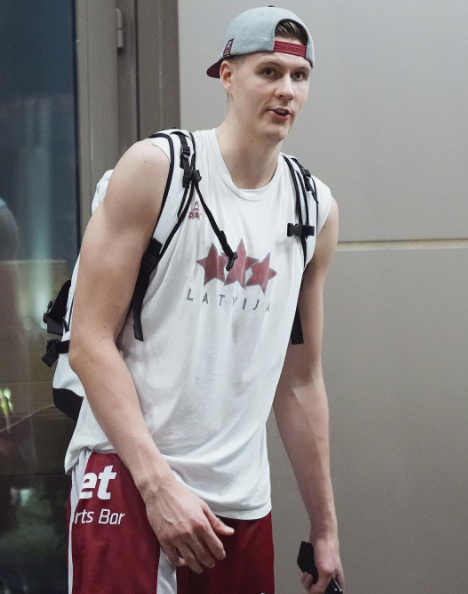 Over seven games, Porzingis averaged 23.6 points (third), 5.9 rebounds (nineteenth), and 1.9 blocks (first) for the endlessly enjoyable Latvian team. Seriously, those of you that were lucky enough to watch this team should count your blessings. They led all teams in points scored per game, and assisted on a remarkable 76.9 percent of their makes (Spain led all of the nations with an otherworldly 82.4 percent assist rate). Just look at this spectacle, for goodness sake:

With the help fellow NBA player Davis Bertans, Porzingis asserted his dominance often against the international competition. In case you didn’t see this clip, he’s still powering in put back dunks (and strutting):

Leading the tournament in blocks was impressive for the youngster, and he anchored a Latvian defense that relied on Porzingis and Porzingis alone to protect the rim:

I love this block. LOVE IT. Seeing Porzingis able to maintain his height through his jump is a beautiful sight. With his slender frame, he has had issues keeping his superiority in the height department when he encounters bigger dudes near the rim. His rim protection statistics have been tremendous, but the eye test still leaves some questions about his problems with traditional big men.

This season from KP, I’m looking for him to take the next step in the post. Too often he had a severe mismatch in his favor on the block, and he either didn’t take advantage of it or didn’t receive the ball. He also ended up at the top of the paint rather than on the block regularly. Getting him the ball near the hoop and letting him go to work when he has shorter defenders on him will give him plenty of easy looks:

Those attempts should be money in the bank every time, especially as KP gets more comfortable with flow of the offense and improves his footwork. It’ll be on both the guards and Porzingis to get him in a position for these type of opportunities as much as possible. He finished in just the 31st percentile last season in post ups after finishing in the 45th as a rookie. See that number peek over the average mark, and his game becomes even more lethal.

Porzingis’ performance in EuroBasket has me incredibly excited to see what he unleashes this season. Whether or not he is the focal point of the offense will rely on how Carmelo Anthony’s mailing address is in New York, but his progression as a player should manifest itself right in front of our eyes in his third season. The #EuroKnicks are a thing of beauty already, but can you imagine how good they’ll be when Dončić joins the fold? I’m salivating.

(I’m quite superstitious, so pretend I never said any of that about Dončić. Good? Good.)

Find The Knicks Wall on Facebook and Twitter for more coverage of the team, and listen to the TKW Podcast on iTunes and SoundCloud!