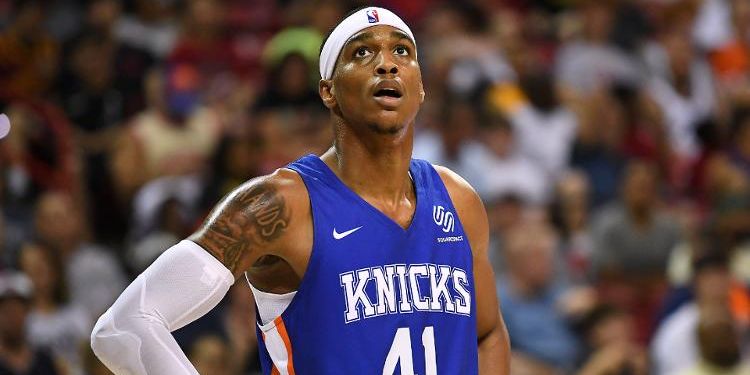 The Knicks signed undrafted Oregon product Kenny Wooten, a Summer League shot-blocker extraordinaire, to an Exhibit 10 deal, inviting him to the the team’s training camp in the fall.

Even with a favorable amount of rotation players participating in Summer League, the New York Knicks failed to make the exhibition tournament’s playoffs.

Although it’s sad that the Knicks fall short even when it doesn’t even matter, there’s a silver lining to be found in Kenny Wooten being invited to the Knicks’ training camp. The New York Post reported that Wooten agreed to terms on an Exhibit 10 deal that allots him a sum of $50,000 if he spends at least 45 days with the team’s G League affiliate, the Westchester Knicks.

Wooten earned the invitation (along with some ooh’s and aah’s) by performing ferociously during his stint on the Knicks Summer League roster. Wooten, 21, played for the Oregon Ducks for two seasons and averaged 6.3 points, 4.8 rebounds, and 2.2 blocks in his sophomore year. The stats aren’t mind blowing, but he did earn all-conference defense honors in both seasons.

During Summer League, Wooten proved those accolades weren’t just for show. In four games of action he averaged 1.8 points, 3.0 rebounds, and 2.5 blocks.

This shot he spiked into the Shadow Realm perfectly illustrates how he affected the game whenever he was on the court.

His time at Madison Square Garden may have to wait, since the Knicks already have 15 players under contract. Wooten may have been invited to fight for a roster spot in training camp, but it’s doubtful he takes the spot of one of the bigs even if he outperforms them.

The Knicks’ newly signed big men corps of Julius Randle, Bobby Portis, and Taj Gibson combined will earn nearly $50 million this upcoming season in guaranteed money. I’m not smarter than your average bear, but I doubt the front office is willing to write off a multi-million dollar contract as a loss for the sake of giving a G League–level player a shot.

Wooten certainly impressed Knicks brass as a rim protector, but he’ll need a good deal of patience if he hopes to play for the big club this season. With half the roster on short-term deals, it wouldn’t be a surprise if a trade allowed him to move into the 15-man regular season roster. Last year, such a thing happened with Kadeem Allen, John Jenkins, and Billy Garrett Jr. Allen, still on a two-way contract, ended up playing 19 games and averaged 21 minutes for the Knicks last season. Jenkins played 22 and Garrett played four. Their opportunities came as the Knicks depth at guard was depleted due to a bizarre barrage of injuries and the relinquishing of Tim Hardaway Jr., Trey Burke, and Wesley Matthews.

All things considered, Wooten has a long road ahead of him before making an NBA debut with the New York Knicks. Spending time with the Knicks’ G League affiliate may do him some good, since his offensive game is nearly nonexistent.

Both Luke Kornet, forward-center for the Chicago Bulls, and Detroit Pistons guard Langston Galloway got their starts in Westchester before being called up by the Knicks. Though neither have been retained by the Knicks, the Westchester alumni are testaments to what can happen if they stay with the club.

At the very least, Wooten has earned himself a starting point that could lead to a professional debut for New York. He’s not much of a threat on offense, but his defensive prowess and explosiveness could be huge assets if the Knicks decide to bring him off the bench later on in the season. The undrafted 21-year-old has shown grit and tenacity already, and if he can parlay that into a strong effort in training camp, he’ll be in good shape for the bigger opportunities he’ll have under the Knicks’ spry front office.