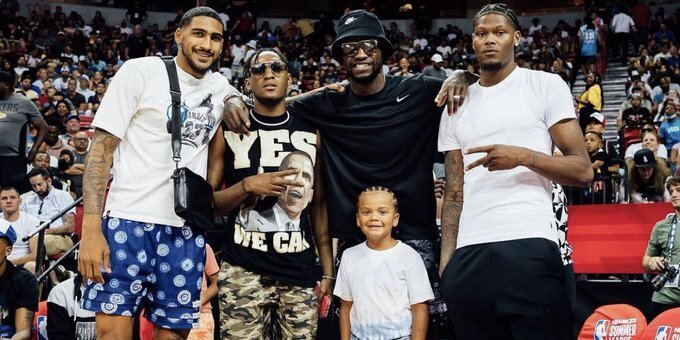 There are many Silly Seasons in the NBA calendar, but we’re now in the silliest. Let’s catch up on what some Knicks have been working on.

Now that Summer League is over and the player movement part of the offseason is, outside of a couple of significant dominoes, winding down, we’ve officially entered the silliest part of the NBA calendar. That’s right, it’s Workout SZN, baby!

Workout Season is the spiritual sibling to Summer League – a time of relentless optimism and limitless potential, where every center is a three-point assassin, every guard has used their VC to purchase the Kyrie Irving handles package, and every NBA player is putting up Wilt Chamberlain numbers in Pro-Ams and pick-up games.

So let’s check in with some of the 2022 Knicks and see what they’ve been up to recently.

Immanuel Quickley has been on a real-life “Where In The World is Carmen San Diego” kick this summer. From Miami to the Hamptons to Milan to the Bahamas to Spain, if it’s a beautiful location, chances are Quick has been there this offseason. Make no mistakes though: Quickley might not be bombarding the internet with workout videos, but that doesn’t mean the work isn’t getting done.

Iron sharpens iron. Everyday something was polished. Things were worked on over and over again. Shoutout to all of the guys this week, it was awesome learning from you too!!! pic.twitter.com/LVLrdvb1AH

Perhaps the most consistent offseason Knicks trend of the last few years, Mitchell Robinson is back at his alma mater, Chalmette High School in Chalmette, Louisiana, with longtime trainer Marcell Scott, posting videos of himself splashing threes in an empty gym.

It would appear that Mitch and Scott have heard the reactions from similar videos over the last couple years, given Scott’s caption. So far none of the videos or Robinson’s tweets hinting at unveiling the jumper have born out on the court – Robinson has never attempted a shot further out than 13 feet in his four years in the NBA, and his free throw percentage indicates that might be the correct decision.

While every off-season video of Mitch inevitably jump-starts a retread of the “threes vs. post moves” debate, it’s probably the screening and passing that are the most important for unlocking more of his game, so hopefully, some of that work is being sprinkled in the mix as well.

Julius Randle’s summer physical conditioning updates have become almost as ubiquitous as Robinson shooting videos over the last few years, and this summer is no exception. Randle has been in Dallas, working out with Jericho Sims and others since early July.

Asked Jericho about his summer weight training in Dallas with Julius Randle.

“(Julius) wanted me to come down so I said, ‘Hey, he’s a big-time player, why not get close to him, build that relationship.”

Doubt anybody on Knicks benching more than those two. pic.twitter.com/idssJqxtx4

Julius Randle putting in the work this offseason 💪

Obi has been popping up all over the internet in the last couple weeks, thanks in part to an explosive showing at the Miami Pro League.

Obi joined Dennis Smith Jr. and Darius Garland and proceeded to dunk everything in sight, developing beautiful chemistry with Garland along the way.

Toppin then got in the lab with two former Knicks in Dennis Smith Jr. and Michael “Carmelo from the Left Block” Beasley to work on some new dunks, perhaps in anticipation of defending his title in this year’s Dunk Contest.

— Dennis Smith Jr. with the commentary as Obi Toppin and Michael Beasley try some new dunks in Miami 😂 pic.twitter.com/oQj61GaCf6

He’s also clearly been making the handle a priority, a welcome sign as he moves further from the “Corner Three specialist” role he was forced into as a rookie and more into the creative offensive presence that got him drafted eighth overall out of Dayton.

Randle and Sims aren’t the only Knicks working out in Texas. Quentin Grimes, the 2022 Summer League standout and himself a Texas native, was slated to play in LA’s Drew League but that turned out to be a false alarm. Instead, he’s been back in Houston, participating in Aaron Miller’s Elite Pro Run and showcasing more of the combo guard handles he put on display in Las Vegas.

The Knicks’ 22-year-old star appears to have activated his Zero Dark Thirty-Nine mode. Outside of some ink in June, there has been absolute radio silence from The Maple Mamba. But make no mistake, if there’s one thing about RJ Barrett that’s unquestionable, it’s his work ethic. There should be no doubt that wherever he is, he’s grinding his Beaver Tail off, getting ready for life with the new-look Knicks.