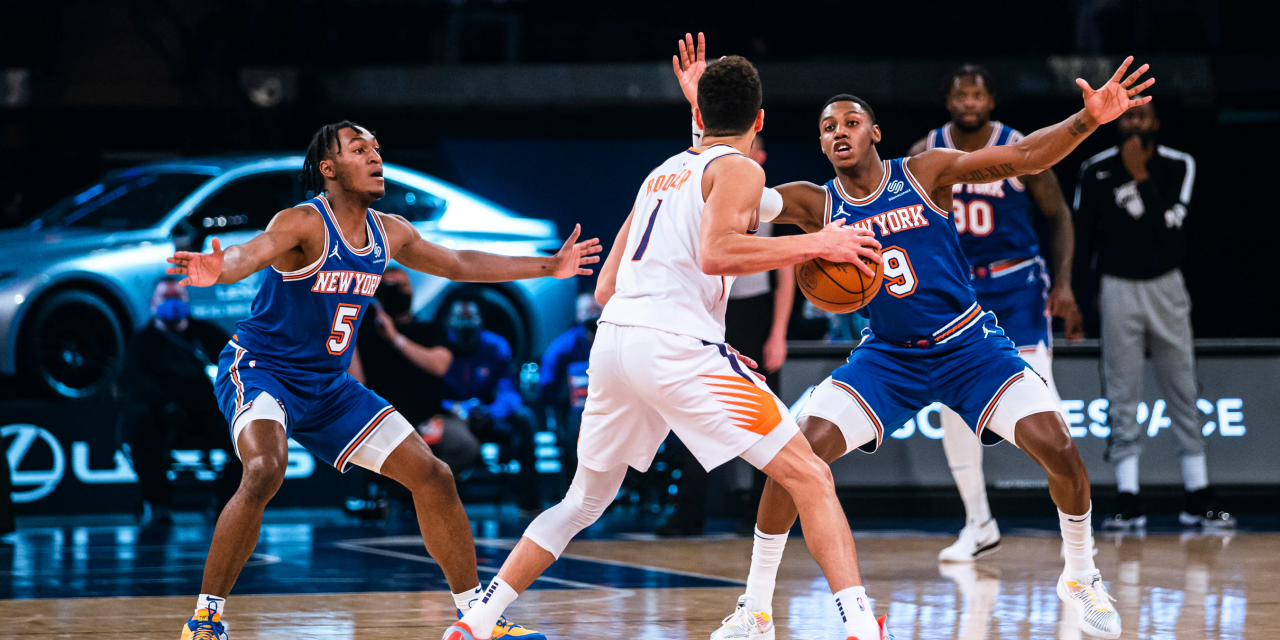 The Knicks battled all night long with the second-best team in the NBA, the Suns, with an early lead leaving their grasp, snapping a nine-game winning streak.

The New York Knicks (34-28) lost to the Phoenix Suns (43-18) with a final score of 118-110 at Madison Square Garden to snap their nine-game winning streak. New York led by as much as 15 points in both the first and second quarters but were unable to hold onto the lead after Devin Booker exploded for 33 points for Phoenix along with some tough baskets by All-Star Chris Paul.

It was a convincing start for the Knicks, as they shot 70% in the first quarter to lead by seven, 36-29 after 12 minutes. However, the red-hot shooting for the Knicks slowed after the opening period, which ultimately led to Phoenix’s comeback. The Suns outscored the Knicks 62-47 in the second half, topped off by Paul hitting three jumpers to close out the game on a 7-0 run for Phoenix.

The Knicks trailed 111-102 with 2:53 remaining but cut the lead to three, 113-110. Paul then made a contested fadeaway two-point jumper and then a contested fadeaway three-point jumper to end it, as he had 20 points, six assists, and five rebounds on the night. Additionally, Mikal Bridges was a massive factor for Phoenix as he had 21 points on 8-of-12 shooting from the field, 3-for-6 from beyond the arc.

As a team, the Knicks struggled defensively, seemingly the most they have since before the winning streak, allowing Phoenix to shoot 54.2% from the field and 41.2% from three. While some of this can be attributed to ridiculous contested shot-making by Paul and Booker, the Knicks left a lot more wide-open three-point shooters than normal. Additionally, the Knicks’ transition defense wasn’t as good as it normally is, as they allowed Phoenix to score 16 fast-break points. This isn’t surprising given how tired the Knicks looked in the second half.

That being said, let’s take a look at three major takeaways for the Knicks from this game.

Randle came into this game averaging 30.1 points, 9.1 rebounds, and 6.2 assists on 46.1% shooting from the field and 45.3% shooting beyond the arc over his last nine games. However, that slowed down tremendously tonight, as Randle only scored 18 points on 6-of-17 from the field.

It isn’t a shock that an off-game comes here for Randle, as he was playing against one of the best team defenses in the league in the Phoenix Suns. The Suns entered the game ranking in the top seven of most defensive categories in the league, including Defensive Rating, opponent points per game, and opponent three-point percentage. Players like Deandre Ayton and Mikal Bridges, also make things tough for opponents both at the rim and on the perimeter, respectively.

Furthermore, Randle has only missed one game this season and leads the NBA in minutes, so him being tired after going off for nine games straight where he averaged over 40 minutes per game makes sense. Randle and the Knicks will have a day off before their next game on Wednesday.

Over the Knicks’ nine-game winning streak coming into Monday’s game, Derrick Rose was averaging 16.6 points per game and 4.0 assists per game on 53.5% from the field. This dominance off the bench from Rose continued versus the Suns has he had 22 points, six rebounds, six assists on 10-of-18 from the field.

D Rose doing anything he can to keep this streak alive pic.twitter.com/TPvRY0B1w6

Rose has done a great job of playing the hybrid of bench player and closing point guard for the Knicks and would have a case for Sixth Man of the Year had he started the season in New York. Having a creator out there on the floor at point guard with Randle and Barrett is so important, as it takes the attention off of both, and creates space. It’s no coincidence why the Knicks have struggled when Rose isn’t in the lineup.

Over the last several games, Elfrid Payton has been starting but trending towards playing fewer than 20 minutes per game. However, it seems like he is settling into that role, and playing a lot better in limited time. Payton played well in just 15 minutes tonight, scoring seven points on 3-for-4 shooting to go along with four rebounds and three assists. With Payton knowing his role and taking fewer shots, it’s helping this offense a lot.

While it may not jump out on the stat sheet, Obi Toppin has played a lot better recently. The rookie forward’s confidence appears to be rising each game, and he’s not looking to just pass the ball out as much anymore. In 10 minutes against the Suns, he had six points and three rebounds on 3-for-5 shooting.

These six points included a phenomenal catch and layup in transition on a pass from Rose, and then a nice post move into a layup right after. Furthermore, Toppin’s defense hasn’t been as bad as many expected it to be. He’s improving in that area as fast as he is in others.

A good Toppin will be a nice bench piece for this team for the rest of the season, before his role likely increases a bit for his sophomore season.

A Look at the Eastern Conference Standings

With the Knicks losing Monday to the Suns, and the Hawks also losing to the Pistons, New York and Atlanta remain tied for the fourth seed. The Celtics and Heat remain on their tail at just 1.5 games back.

The Knicks will play their next game against the Chicago Bulls at home on Wednesday night at 7:30 p.m. ET before heading on a six-game trip out west.