Taj Gibson Could Own the Role of Player-Coach This Season 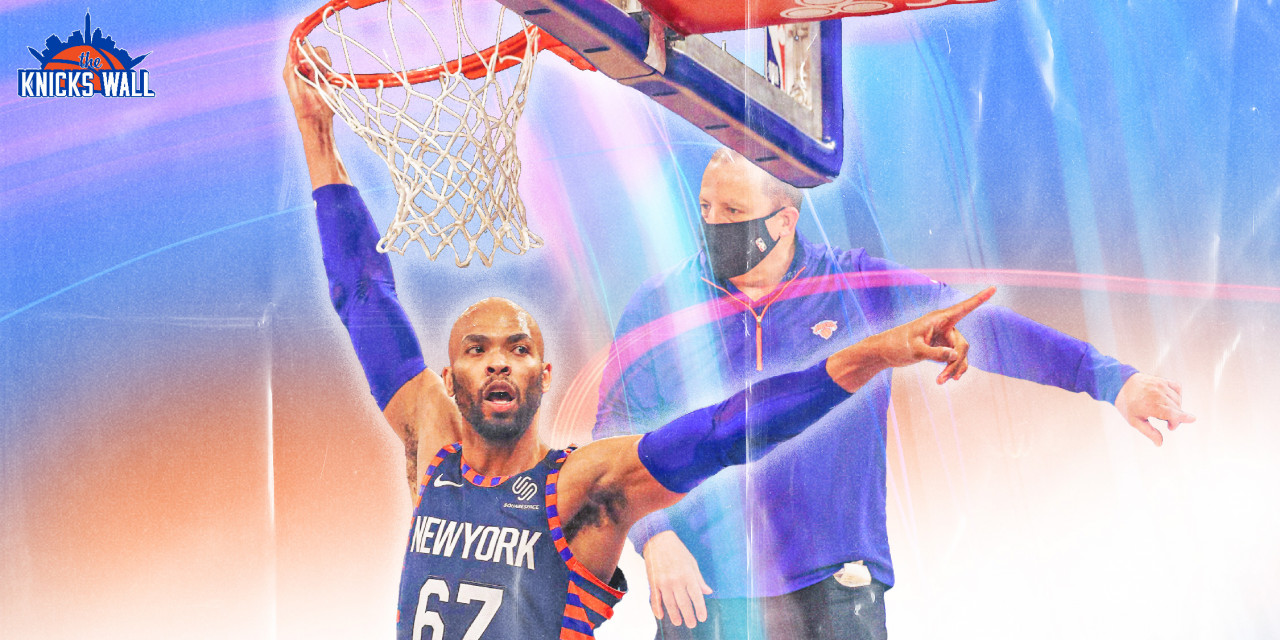 After being pressed into duty last season following injuries at the center position, Taj Gibson is ready to take a more active role on the sidelines.

A 12-year NBA veteran, Taj Gibson is among the longest-tenured players in the league. As a longtime disciple of head coach Tom Thibodeau, he’s recently been sought out as a source of wisdom on younger teams that the coach is leading. Such was the case when he was signed by the Knicks just a handful of games into the 2020–21 season when their oldest players at the time were 29-year-olds Alec Burks and Reggie Bullock.

The 36-year-old Gibson’s role at the time was meant to be that of a bench presence, as the Knicks’ frontcourt was logged up with Mitchell Robinson, Nerlens Noel, Julius Randle, and then-rookie Obi Toppin. Noel and Toppin suffered injuries early in the season, signaling the signing of an emergency big man. Gibson, playing under Thibodeau for the eighth of his 12 NBA seasons, was ready for whatever the team asked of him upon arrival.

“I’ll do what the team needs me to do,” Gibson said at shootaround following his signing. “Just being around the young guys and trying to get reps up to be ready for anything thrown my way. I’m just extremely happy to be back around the guys.”

Coach Thibodeau echoed that message, telling the New York Post: “It’s invaluable to have that type of leadership, great teammate, team-first guy, hard-working, always ready. Whatever you ask him to do. You can start him, you can bring him off the bench. Or you can just have him waiting for an opportunity, and he handles all of them great.”

It turned out to be far more than he may have bargained for, though, as Robinson ultimately missed 41 games with both wrist and foot injuries. With Noel then pressed into the starting center role, Gibson was responsible for vital bench minutes down the stretch. He ended up logging 20.8 minutes played per game, averaging 5.4 points, 5.6 rebounds and over a block per contest.

Why I love Taj Gibson in 21 seconds. I don’t care if this didn’t count. pic.twitter.com/Tzi6TP9wXX

As the Knicks shocked the league and finished the season with the fourth seed in the Eastern Conference, the team had to look to Gibson for guidance even more as he had the most playoff experience of any of them. Even though the Knicks lost in five games to the Hawks in the first round, Gibson had his experience shine through in spades. He even usurped the starting center spot from Noel for the final three games of the series, averaging five points, seven rebounds, and a block per game.

Having played on a one-year deal with Robinson expected to come back healthy for the 2021–22 campaign, it was tough to know what the Knicks would do with Gibson. In the event that they re-sign fellow free agent Noel, would the Knicks need Gibson behind them on the bench again? Well, the team decided the answer to that was a resounding yes, and re-signed both Noel and Gibson to multi-year deals. The team locked Gibson into a two-year, $10.1 million deal while also retaining Noel for two years with a team option for a third.

Gibson, a native of Brooklyn, had always dreamed of playing in New York in front of his community, and especially with the coach whom he shared most of his NBA years. For him, regardless of the money he was offered, he wanted to return to the team where he knew his veteran presence made an impact.

“I’m really just being myself, being a good teammate, going in there and working out every day, whatever happens, happens,” said Gibson to SNY’s Ian Begley following his re-signing. “They know I’m ready, always willing, and ready to play whenever I have to. But right now, I’m just happy to be the vet, the guy that comes in, works out hard every day, but is always ready and capable. And I’m having a good time being with these young guys every day and just trying to help build a culture. Who knows where it can take me—even after my career.”

Taj Gibson continues to be a blessing to his community and a model New Yorker. Love this guy. pic.twitter.com/ix1uNUXPLF

So now with Robinson and Noel both healthy and back in the fold, and Randle and Toppin ready to hold down the rest of the frontcourt, what does this mean for Gibson and his role should they all remain fit and in the rotation before him? Well, he just might finally take on that responsibility of a sideline sage that was envisioned for him last season.

There’s a multitude of young talent on the team that could use his mentoring, as well as three brand new rookies in Quentin Grimes, Deuce McBride, and Jericho Sims. In fact, there are a total of nine players on the Knicks’ training camp roster going into their third season or fewer. Gibson said it himself that building a rapport with these younger players and grooming them properly could even take him places after his career in reference to coaching positions. He’s a big fundamentalist, known a lot for setting efficient screens and securing offensive rebounds, making the kinds of plays that add longevity to a player’s career.

In the latter years of his career, he and coach Thibodeau may embrace a relationship more akin to that of a duo like Udonis Haslem and Erik Spoelstra where they are each voices from the sideline. Regardless of playtime, the two would just be dedicated to guiding the younger players on the team down the right path to success in the NBA. No finger-poking ejections allowed for Gibson, though.

In the event that injuries should ravage the team, Gibson has proven that he can easily step in to cover valuable minutes for the Knicks, too. Whether it be the regular season or the playoffs, he’s more than capable of facing off in the bright lights to keep the team steady in close contests.

Either way, under the terms of his new contract, Gibson and Thibodeau will reach a decade of playing and coaching alongside each other in the NBA by its conclusion. At the end of that deal, the then 38-year-old Gibson could very well re-up and serve the same role. Or, he might just trade that jersey in for an orange and blue quarter-zip to stand next to Thibodeau on the sidelines.