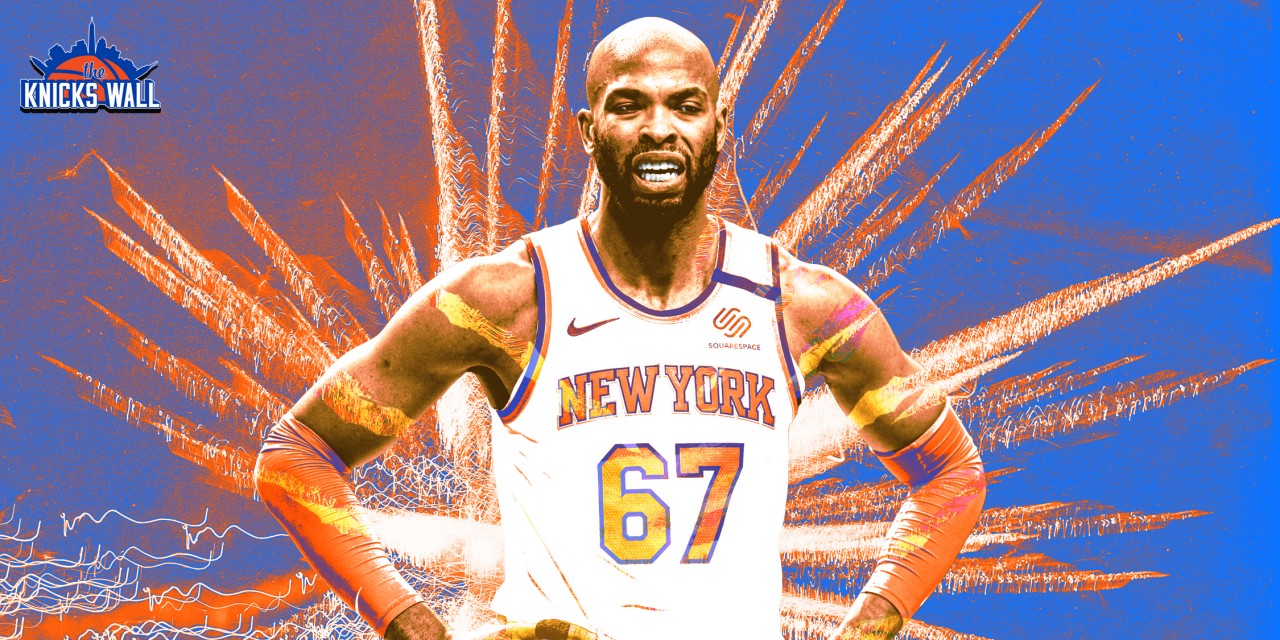 With more postseason experience than any other teammate, Taj Gibson will be fundamental to how the Knicks handle these playoff games.

There are just a few hard truths in life. Nothing lasts forever, perfection is impossible, and where Tom Thibodeau goes, Taj Gibson follows.

Throughout his 12 years of NBA service, Gibson has played with Thibodeau as his head coach for eight of those across his tenures with the Chicago Bulls, Minnesota Timberwolves, and New York Knicks. This accounts for all of Thibodeau’s nine years as an NBA head coach but one.

Even though he was a Knick last year under David Fizdale’s reign, the 35-year-old big man was brought back in by Thibodeau this season as a veteran presence to help mentor one of the NBA’s youngest rosters.

“We’re thrilled he’s back with us,” said Thibodeau to the New York Post after the Gibson signing. “It’s invaluable to have that type of leadership, great teammate, team-first guy, hard-working, always ready. Whatever you ask him to do. You can start him, you can bring him off the bench. Or you can just have him waiting for an opportunity, and he handles all of them great.”

His role seemed to be just that of a veteran bench presence, as he didn’t see the floor in his first eight games suited up this season, and only logged minutes in four of his first 15. This all changed quickly once starting center Mitchell Robinson went down with a hand fracture back in February.

Nerlens Noel was promoted to the starting lineup and Gibson was relied on as the team’s backup center. He performed amicably in that role, averaging 5.4 points and 5.6 rebounds while playing 20.8 minutes per game over the regular season. He was most impressive defensively, securing one block and 0.7 steals per game. His plus/minus of +2.9 across 45 games played is the second best on the team behind Derrick Rose, the team’s other old friend of Thibodeau’s.

So even though he wasn’t initially a big part of the team’s plans on the court, Gibson played a massive part in turning them into the 41-win contender that was initially projected to win just 22.5 games. Now as an integral part of a playoff roster with an average age of 25.7, it’s time for Gibson to teach the team how these games are handled and won as they face the Atlanta Hawks in the first Knicks playoff series since the 2012–13 season.

Gibson has made it to the postseason eight times across tenures with the Bulls, Timberwolves, and Oklahoma City Thunder. All but two of these times, his teams were coached by Tom Thibodeau. Gibson has averaged 21.9 minutes per game played in his postseason career and recorded a +2.3 across 26 total postseason wins. He played a career-high 30.7 minutes per game on the 2014 Bulls playoff squad, averaging 18.2 points and 6.2 rebounds along with a whopping 2.4 blocks across five games.

His most successful playoff trip came back in 2011 when the Rose-led Bulls lost to the LeBron James–led Miami Heat in five games in the Eastern Conference Finals. Outside of that season, Gibson and Thibodeau’s Chicago teams won a playoff series two separate times—in 2013 and 2015—but never again made it out of the Eastern Conference semi-finals.

Why I love Taj Gibson in 21 seconds. I don’t care if this didn’t count. pic.twitter.com/Tzi6TP9wXX

Regardless, this is much more than can be said for the rest of the Knicks’ current roster; of the players who averaged more than 10 minutes per game this season, only five players have even been on a playoff team in their careers. Rose was on the same Bulls and Timberwolves teams as Gibson, so he is also familiar fighting alongside him under the bright lights.

The others all saw pretty quick playoff exits or did not play a noteworthy part on their teams. Reggie Bullock made the playoffs with both the Clippers in 2014 and the Pistons in 2016 but only played two games in each series as both teams lost in the first round.

Nerlens Noel will actually be in the playoffs for the third straight season, as he made it there with the Thunder in both 2019 and 2020. His team lost in the first round both times, though, as he averaged more than 12 minutes played per series.

Alec Burks is the only other Knick to have made it out of the first round, doing so with the Utah Jazz back in 2018. They went on to lose in the Western Conference semi-finals, and Burks has two other first-round playoff exits to go with that.

Serving his role as the backup center, Gibson played more minutes than anticipated after Noel left the game with an undisclosed injury. In 24 minutes played, he recorded five points and nine rebounds, five of which were on the offensive end. These led to a lot of second chance attempts for the Knicks, like the one below where R.J. Barrett scores on the layup. Gibson also logged a steal and block apiece.

At his age, though, Gibson did struggle switching onto defenders that helped get Trae Young open late in the game. The worst offense was on the game-winning bucket by Young, where Gibson moved to play Young on the perimeter and he slid into the paint for the easy floater. Even though he played out of necessity there, ideally Noel would get those closing minutes.

Still, Gibson’s impact was definitely felt on the game, and specifically on the bench unit he’s played along all season. The second unit of Gibson, Rose, Burks, Immanuel Quickley and Obi Toppin all logged positive plus/minuses, and the tides of the game tended to shift in the Knicks’ favor when they were on the floor. In fact, when that lineup was on the floor together in the regular season, they outscored opponents by 17.7 points per 100 possessions.

Most impressively, that lineup features two rookies in Quickley and Toppin who showed no nerves when it came to their first playoff contest. They scored a combined 15 points, and played more minutes in this game than they each averaged in the regular season. The bench as a whole combined for 64 points in total, while Atlanta’s bench only scored 31 points.

So even at 35 years old, Gibson has been commanding that bench unit all season long, and helping the younger players have an impact in high-level games. While he may have initially been asked to come to New York as a voice on the sideline, he’s proven to be one on the floor, too.

Even if he and Tom Thibodeau didn’t envision preparing a team for a playoff run at the beginning of the season, that’s exactly what they’re doing now. Gibson’s mind has stayed sharp and he continues to show the intensity and playmaking ability built for this stage, and he can use that to give his younger teammates the tools to be successful for a long time.