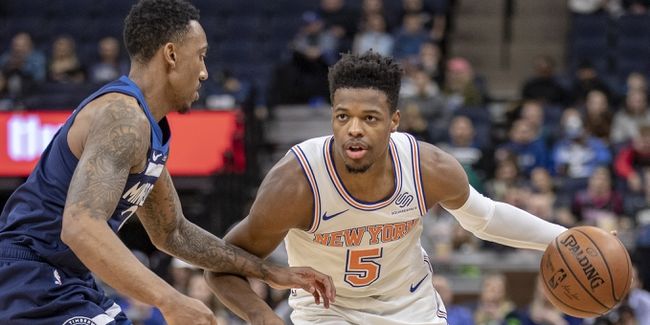 The New York Knicks’ (13-54) double-digit loss to the Minnesota Timberwolves (32-25) was an abject failure (or success if you’re riding the tank train). Terrible guard play from Dennis Smith Jr. and Emmanuel Mudiay was the catalyst to New York’s sixth straight loss.

Nonetheless, there were a couple of interesting wrinkles from the 103-92 defeat.

No one’s exactly sure why, but it appears that second-year shooting guard Damyean Dotson has the Minnesota Timberwolves’ number this season. Tonight, he scored 13 points in the first quarter alone in the Wolves’ own house, making it 31 in first quarters against them for the season. He finished the game with 26 points and six assists.

Allonzo Trier came out stumbling with two turnovers but somehow managed to turn it around, going 4-5 from three. He’s been solid from long-range all season, but was a bit shy to let it fly. Understandably, he prefers to get to the rim and to the line. Last game he went 0-for-5 from beyond the arc. Against the Wolves he shot 4-for-5. If he can add attempts and maintain a decent three-point field goal percentage, he could add another great weapon to his repertoire.

Mitch was a monster as usual, swatting three blocks and pulling down five rebounds in the half. His disruptive presence helped keep the lead from getting silly. Without a post game in sight, he still manages to get to whatever he wants at the rim. The shots are ugly and unpleasant to watch, but he attacks the rim like the ball is a blunt instrument and defends the rim like he’s sworn an oath to on the Night’s Watch. He ended the game with eight points, 10 rebounds, and five blocks.

Taj Gibson abused the Knicks’ guards, caught in a mismatch, and the Knicks’ big men, trying to hold down the paint. Gibson has a limited range, but he used every inch to tear the Knicks apart.

He shot 6-of-9 in the first half alone. He and running mate Jeff Teague torched the Knicks nearly every time they touched the ball. The Knicks may have a point guard battle on their hands, but it’s painfully clear that while they’re busy competing with each other, they still have no one to stop perimeter players on the other team. Keita Bates-Diop had a fantastic game as well, because every single nobody has to have a career game against the Knicks.

While Dennis Smith Jr. had a bad performance, he was instrumental in Kevin Knox’s first three-pointer, leading to the rookie’s improved performance. Knox had four assists, a pleasantly unusual stat, and tying his career best. Often times, he can be a black hole on offense, but his ability to find the open man on his own drives could be a development essential to his growth as a multi-dimensional player.

Kevin Knox with the steal, then goes coast-to-coast for the finish pic.twitter.com/DmvBW2MTaA

His aggressiveness on the ball was pleasing, and the passing was encouraging. This was his first game where he played well and it wasn’t due to fluke-y luck. He finished with 13 points, five rebounds, and four assists.

Numbers of the Night

17: That’s the number of turnovers the Knicks had tonight. I’d argue that some bad games with the ball are unavoidable as a team trying to build an identity and mesh, but their assist total isn’t worth the argument. Tim Hardaway Jr., a ball-dominant early-shot-clock shooter may be gone, but the Knicks’ bad passing goes hand in hand with their shooting woes. Sloppiness is the charge.

50 percent: All Wolves starters shot 50 percent or above in the first half. With the first substitutions for the Knicks, things finally appeared to tighten up on defense as well on offense. It’s unclear whether the Knicks’ bench defense is because of other teams lacking depth, or if the Knicks are simply starting the wrong players, but it’s one of the few positives for the team.

The Knicks are in Indianapolis on Tuesday to face the Pacers.