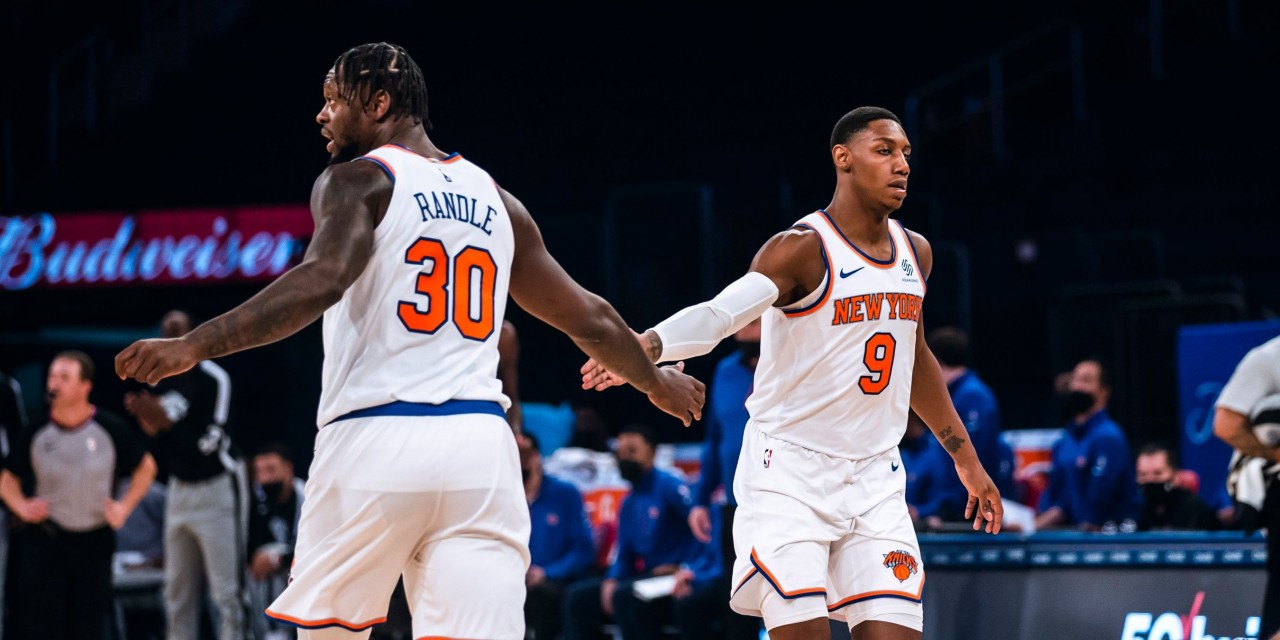 Defense has been a key reason for the Knicks’ 2020–21 success. Team chemistry has flown under the radar but has been just as vital.

NEW YORK — The New York Knicks (30-27) have a chance to extend their winning streak to six games with a win over the visiting New Orleans Pelicans (25-31) and put themselves six games away from securing a winning season.

The Knicks have had just three winning seasons since the 1990s and made the playoffs a total of four times. Many have credited head coach Tom Thibodeau with restoring a ‘90s aesthetic back to the team, with tenacious defense becoming the team’s calling card once again. Yes, Thibodeau has restored a feeling that has laid dormant at Madison Square Garden for decades, but not the feeling you’d think.

Thibodeau acknowledged that the ‘90s are never coming back, but this current Knicks team implements similar principles beyond defense. They are playing for each other.

“But when you look at it, the same things go into winning. And whether you’re talking about the ‘70s Knicks or the ‘90s Knicks, you know, championship-caliber teams, it all starts with their defense, the rebounding, and their willingness to fight for each other,” Thibodeau said before Sunday’s matinee matchup with New Orleans.

“So I think the important thing for us was to start to build our foundation, and so we wanted to start with the defensive rebounding. We’ve worked very hard on the shooting component. And then the unselfishness to play for each other, and we’ve had a number of different people step up at the end of games and make plays for us. And nothing is more important than playing for the team.”

The willingness to play for each other is a forgotten concept of team-building discourse. Outside the Knicks, when you take a finer look at the truly great teams in NBA history, they reach a point in team chemistry where no one man is bigger than the team.

As Thibodeau noted, this was the true secret behind the franchise’s success in the ‘70s and ‘90s. It went beyond strong defense and “bully ball”—it was 12 men moving as one. When you hear about the Red Holzman-coached teams, one thing always sticks out: no one player meant more to the team than anyone else. The offense was predicated on everyone touching the ball.

Pat Riley, and later Jeff Van Gundy’s, ’90s teams were no different, albeit a little more aggressive—and Thibodeau had a front-row seat. Team defense was the calling card of those teams, not just one or two superior defenders locking up the opposing team’s best player.

The same is happening right now. Julius Randle, the front-runner for the Most Improved Player award, is definitely at the center of it all. But on the nights Randle doesn’t have his best stuff, he is now getting picked up. Thibodeau credited the team’s current win streak to that very principle. Nerlens Noel has filled in admirably for Mitchell Robinson. On a nightly basis, someone else seems to step up, too.

This past Friday night, it was Randle and R.J. Barrett who carried the team to victory in Dallas with 68 combined points. Last Wednesday, it was the hot shooting of Alec Burks that got the Knicks the win in New Orleans. Even Elfrid Payton got in on the fun, scoring 20 points in a win over the Lakers on Monday night.

The foundation is getting through to the players, too. The revival of “KnicksTape,” Iman Shumpert’s rap spawning a hashtag for fans, complements what Thibodeau is seeing from his guys. Shumpert, authoring the slogan, described it best back in 2012, calling KnicksTape a collection of different personalities collaborating for one purpose. Playing for each other, 12 men moving as one.