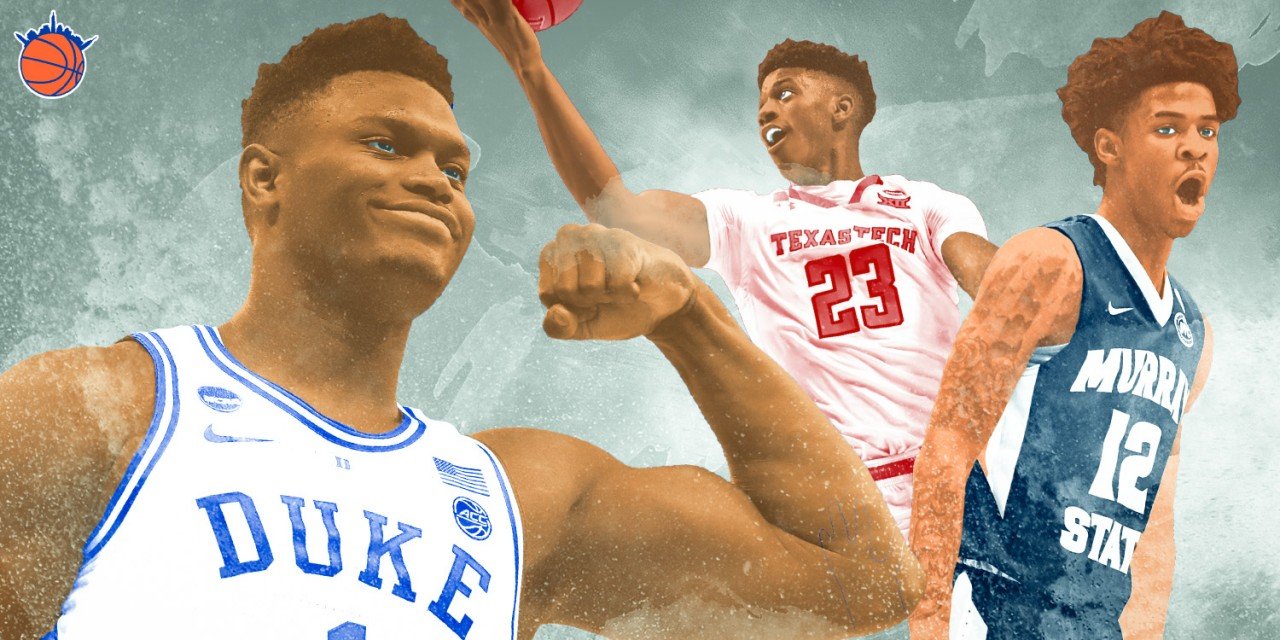 With the first two rounds of NCAA tournament action in the books, Mike Cortez’s Knicks Draft Board returns for its final installment.

At last, we have arrived at the end of our journey.

The next time we check in on our favorite college guys, the lottery will be upon us. By now we have learned quite a bit about each of the top prospects.

Entertainment value aside, March Madness has long been the ultimate litmus test for NBA prospects. It’s the first time we have a chance to see these kids draw the true professional treatment, from NBA-like back-to-backs, to the sheer number of eyeballs watching. It gives us the final preview of the prospects we have obsessed over for months.

The good news for Knicks supporters is the top guys passed their respective tests in flying colors. Ja Morant and Zion garnered a lion’s share of the attention through the first two rounds. In their shadows fellow top prospects Jarrett Culver and Brandon Clarke continued to shine. R.J. Barrett and Cam Reddish probably wish they were in the shadows rather than being nitpicked in the limelight like they’re running for public office.

We now know all we could possibly could in regards to each guy’s pro prospects. Each player’s body of work is at or near completion. How are those changes reflected on the board? Let’s take a look.

Actually, pump the brakes for a second. Before we jump in, let us refresh our minds on what the current Knicks need most—scoring. The team has remained in the basement in offensive efficiency with a league-worst 104.4 Offensive Rating.

Each player among the top of this top-heavy draft can get their shots off. David Fizdale has not implemented much of a system, if any, so there are no specific fits. A complete overhaul should be scheduled for the summer, and this pick could be the building block to whatever Fiz plans to implement.

What more can he say? When Zion went down I wondered if this would show his mortality. The opposite has happened—sort of. On the court Zion has played like a god since returning, averaging 27.6 points a game. But his injury could have made him realize his time at Duke can end any second. He tore through the ACC like a man given a new lease on life.

Through two rounds he has been the best player in the tournament. His matchup with Tacko Fall ended up being his greatest challenge since Gonzaga. It forced Zion to break out the full bag of tricks.

The result was the most complete version of Zion we have seen to date. His 32 points were not 16 dunks, but free-throw line trips, post ups, pocket passes…

UCF pushed Zion to the ropes and he countered. To cap his win he conquered the giant Tacko Fall. Zion acknowledged he couldn’t jump over Tacko; he had to run through Tacko.

ZION ARE YOU KIDDING ME pic.twitter.com/iLn10tfKSv

The killer instinct was great to watch. Should he end up in New York, Zion will be expected to do this night in and night out. He’s going to have to be on every night, more so when his teammates are off.  No moment has looked too big for Zion. His ability to thrive in high stakes moments makes you fall deeper in love with him.

We have reached the point that if the Knicks don’t win the lottery, Mayor de Blasio needs to declare May 15, 2019, a day of mourning.

R.J. Barrett has the fun job of being the most nitpicked of the bunch. Barrett could save a dog from a burning building and someone would find something he could have done better.

RJ Barrett with your by-the-book push in the back to get the rebound and GW-basket. pic.twitter.com/V1GbZB7jBF

Might I remind you this was the game-winning basket. People must forget that Michael Jordan pushed off. People also forget that while Barrett’s shooting numbers aren’t pretty (50.9 effective field goal percentage isn’t ideal), he is not working with much beside Zion.

One thing Duke lacks, which is inexcusable, are shooters. That leads R.J. into compromising positions often. He isn’t the bull Zion is, so when he barrels into the lane, Barrett’s shot often goes awry.

Barrett falls victim to tunnel vision more frequently than some can tolerate. He has a bad habit of grabbing a tough offensive rebound, missing the put-back, getting the rebound, and repeating this process over and over again.

The fact that he’s compared to Andrew Wiggins is insulting. The source of Barrett’s hate is a question to which I’d love to know the answer.

Barrett has every quality you could want in a top pick. He is calm in high stake situations. He has no noticeable holes in his game. His three-point percentage is a common sticking point for R.J. haters, but my rebuttal is he shoots the threes he’s no good at.

The 6-foot-7 freshman’s best shots are off the catch.

Cam & RJ two-man game results in an open three for Barrett, and he drills it ? pic.twitter.com/3oQiEFhPkb

Those opportunities don’t come around that often, especially when Zion and Reddish aren’t on the floor with him.

If Barrett were steps in and becomes the top option in New York, there’s a chance he can be Tim Hardaway Jr. reincarnated. But there’s also the chance he is every bit the star we thought he was, before Zion stole our hearts.

The optimal situation for Barrett remains a bigger picture that includes Kevin Durant and Kyrie Irving. It would give him the master his next obstacle: efficiency.

Are there any more questions about Ja Morant? I sure hope not.

Morant stole the screen any time he was on. The maestro for Murray State had the world swooning so hard some fools actually got off “Ja might get drafted over Zion” takes.

I’d flame them, but can you blame them?

On the TKW Podcast, I said Ja reminds me of a Trae Young and De’Aaron Fox. In the moment it felt like a take. After sleeping on it, I feel comfortable with that description.

fuck it, GIVE ME JA AT 2 pic.twitter.com/4wy87lXLpu

Morant took care of all family business in his two tournament games. He proved he can dominate a one-on-one matchup, slaughtering Markus Howard and Marquette. Florida State was always going to beat Murray State. The real game was seeing how Ja responded to playing a NBA-sized roster—the answer was: pretty good.

There is no question Morant is second overall on a big board—just not the Knicks’. The same Dennis Smith Jr./possible Kyrie situation remains; it’s a big enough problem to give R.J. the edge over Ja at two. But should the Knicks fall to three, it would be a sin to not pass on Ja.

Jarrett Culver is the blue collar blue chipper. He does not possess the flash of Zion or Ja. He is not a hot topic like Barrett. Culver shines in the shadows.

While we obsessed over the play of Ja and Zion in the first round, Culver put together an uber-efficient, 29-point ass whooping on Northern Kentucky.

Quality of opponent aside, Culver showed the world exactly who he is. He is effective with or without the ball. He’s at his best getting to the rim, but if he has to shoot, spotting up seems the better option.

This is who Jarrett Culver is.

Not flashy, but always knows where to be.

He has 9 of Texas Tech’s first 14. pic.twitter.com/pJ93OYMCvd

Culver will face his biggest test of the season in the Sweet 16 versus Michigan. A strong outing could propel him as high as two on some big boards. While Culver no doubt possess All-Star potential, the same cannot be said for his star outlook.

The appeal with Culver is his high floor. At the bare minimum he is a productive playmaker like Evan Turner. His ceiling could be something similar to Khris Middleton, if his three-point shot improves. He is already a no-brainer at four or five, and is now someone you can’t rule out at three.

This was a tough decision. Cam Reddish had every chance at the limelight at Duke, and for the most part, hasn’t been able to seize it. There are moments when Reddish looks every bit the top five pick he’s been projected as most of the season. He is a prototype player, he can dribble, defend and shoot competently.

Cam’s problem is he has a tendency to fade to the background, like your broke friend when the bill comes.

Against UCF, Cam had his moments on both sides of the floor. He had 10 points in the first 10 minutes. He finished with 13 points.

But, he did have his moments.

Reddish has way too much Kevin Knox in him. There isn’t one thing you can point out that Reddish—or Knox, for this argument—does well. The 6-8 wing would be given every opportunity to succeed in New York, as he has at Duke. You just can’t say with unwavering confidence that Cam will seize that opportunity.

That’s not the case with Brandon Clarke. He is the least talked about star in the country, but that could change as soon as the Sweet 16.

He made his bones early in the season, with Gonzaga being the first team to beat Zion and Duke. Since then, Clarke has had just a productive season as Zion, and had just as impressive a showing in the second round.

Clarke is by no means Zion Williamson. He would be a similar addition in terms of playing style and culture fit. Clarke is the type of glue guy you can build a winning culture with. He sought out Gonzaga because of that culture, and could be the type of personality that gels with the foundation for which Fizdale has laid the groundwork.

To be crystal clear, Clarke and Reddish should be options at five, and five only. They are a tier below, but that does not mean they cannot be value adds.

Mike Cortez and The Knicks Wall’s draft coverage will return with more analysis in the coming weeks. Stay tuned.

»READ: The Knicks Wall Draft Board — Fourth Edition (The Other Guys)