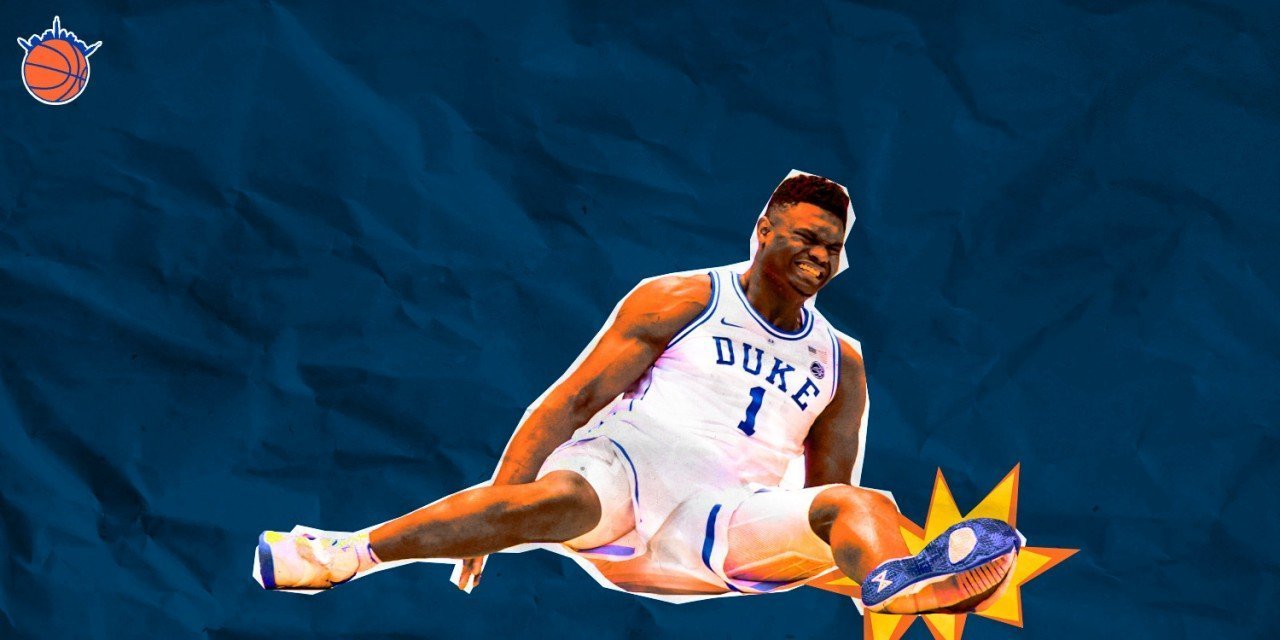 The pre–March Madness draft board from The Knicks Wall’s Mike Cortez outlines the biggest prospects on New York’s radar.

Zion Williamson is mortal after all. Up until he busted through his Nikes seconds into his inaugural Duke-UNC game, Zion was a god among men. His recent disposals of Louisville and NC State gave us reason to doubt whether he is a human being. We now have that answer; he is indeed human and suffers the same injuries any man does.

“If you could make God bleed, people would cease to believe in him,” is the only good line Mickey Rourke had in Iron Man 2, while also summarizing the best way to monitor Zion post-injury. Does he come back and risk further injury? If he sits out the rest of the season, will his “heart” suddenly come to question? If another player starts to shine in his absence, do they become the safer investment?

The answer is a resounding no. Zion still sits at the top of every draft board. If you’re picking at the top of the draft, you want Zion to rock a polo the rest of the season.

In Williamson’s absence, the attention usually devoted gushing over him can now be spread among the other top prospects.

This is a blessing in disguise for the Knicks, who now have a wider pick range. Thanks to the Suns being their typical inept selves, losing 17 in a row and counting, Phoenix now holds the top spot in the lottery. That means the Knicks can lose 60-plus games and pick sixth in the draft.

The hope is that Adam Silver would make a business decision to ensure New York lands a star. But in the event Silver decides to avoid his Stern 2.0 destiny, it would be best to do some homework on guys not named Zion.

There is some good news to wash away this current lotto predicament. The volume on the Kevin Durant and Kyrie Irving chatter has become louder. Well-sourced national guys are talking. Bill Simmons has turned on Kyrie, publicly melting down on Twitter. Kyrie is beefing with the Boston media, and the noise around Durant has gone silent.

The tangible pieces on the current team have also been sources of positivity. Dennis Smith Jr.’s explosive style has been a sight for sore eyes. Mitchell Robinson’s progression has been fantastic to watch. There are pieces here even if the stars never come.

Thanks to their versatility heading towards the summer, the Knicks can use the draft to add a pro-ready player or invest in another project.

Before we get started, the board has gone through a bit of a redesign. Instead of pooling everyone together, there are now two groups—the blue chippers and the other guys.

The blue chippers are the guys the team should be looking to grab in the top three. They are the franchise-caliber guys who can become the third piece to a new big three, or take the mantle as franchise savior should free agency go awry. The best of the rest are guys to target if the pick dips outside the top three or four; they are talented in their own right, but not the guys you lose 60 games for.

The next time we check in on our guys, March will have already kicked off. This is the time when the college season starts to mimic a pro schedule. There are more games in shorter time frames and less time to scout opponents. It gives us the distilled version of each prospect.

Without further rambling, let’s jump in.

Blue chipper: Zion was in quite the groove before he went down. His last two games against Louisville and NC State proved how unstoppable he could be. The closing stretch to complete a 23-point comeback in the former matchup could end up being his magnum opus.

Aside from bullying any man fool enough to challenge him, Zion was the de facto center for that run. He anchored a defense that swarmed the Cardinals like hornets. On offense, Zion took the Beast Mode approach, running through his opponent’s face over and over and over.

This is where Coach K should’ve used him more, and where the Knicks should look to use him, if they’re fortunate enough to land him. A fast break of Zion, Smith Jr., and Knox is reason enough to smile. Imagine having Zion at the 5 with Durant and Kyrie flanking him? The mere thought of that makes all this losing worth it.

Blue chipper: In his first full game without Zion, R.J. Barrett had to lead his guys into the Carrier Dome, in front of the largest college crowd ever, to avenge one of Duke’s three losses on the season. Barrett responded by painting his masterpiece.

The numbers (30 points, seven assists, five rebounds), while impressive, were not what made the performance great—it was how he put his team on his back. This felt like Barrett in his truest form. He attacked that Syracuse zone not by launching threes over it, but by charging it head on like a Dothraki rider.

He played every single minute of that game and kept his team afloat for a majority of the contest. When his supporting cast finally woke up in the second half, he did not get tunnel vision; he picked his spots. He finished an efficient 14-for-20 from the field, reminding everyone he is just as much a blue chipper as his star running mate.

That performance also reminded the Knicks that Zion isn’t the only one with star potential. Barrett is just as versatile as his superstar teammate. His ability to do everything at an above average level gives him the highest floor in this group. Against Syracuse, he ran the point. At other points in the season, he has been out on the wing.

R.J. has the potential to thrive in any scenario that welcomes the Knicks. His best use would be coming in to a team with Kyrie and Kevin Durant. It would prevent his main weakness from flaring.

The only fear that comes with Barrett is his gunning mentality. He definitely has some tunnel vision in him, but as Duke’s success with three stars has proven, Barrett does a good job of holding those moments to a minimum.

Blue chipper: The main gripe with Morant continues to be his competition. Unlike Duke, who is on ESPN as much as Stephen A. Smith at this point, Murray State rarely cracks national television. That leaves us to follow Morant’s season largely through YouTube deep dives, which could lead to romanticization. Following a player strictly through highlights is akin to following a person’s life through Instagram; we see the highs, while the lows get filtered out.

Morant appears not to have many lows. He may very well be as good as every indicator suggests. Still, March should give the well-needed clarity on where Morant truly ranks among the elite in this class. Ja has the most to gain from a big March Madness. A strong performance against a blue blood in the tournament could be all that is required to solidify him as a bonafide top-two pick, if he isn’t there already.

Having said all that, a future with the Knicks remains hazy. After watching more Dennis Smith Jr., the idea of a Morant-DSJ backcourt isn’t ridiculous—in fact it could work out. Both guards can find their own shot just as easily as they can set others up. The goal is to achieve a position-less lineup, but a pivot to a backcourt similar to what Portland has in Dame Lillard and C.J. McCollum is not a bad Plan B.

The only person who could prevent Ja from coming is Kyrie Irving. The rumors of Kyrie and KD continue to intensify. What it comes down to is how confident the team is about landing Kyrie. If this whole thing is a troll job, and the front office gets no serious indicators from Kyrie’s camp, you can’t not take Morant. But if Kyrie passes word to people in the organization that he is coming, addressing other areas is the prudent play.

The other guy: If the Knicks were to miss out on Zion and R.J., but still think they are getting something serious this July, adding a complementary player like Reddish could be in the cards.

Cam Reddish might not be the guy we thought he was. The barbershop description on Reddish before the season was sharpshooter. He has not been that—shooting 33.2 percent from three this season—but he has proven to be a quietly great defender.

Reddish did not show out in Syracuse like Barrett, but he did put on an impressive performance. His shot was awful that night—1-for-8 from three, 2-for-11 from the field overall. That did not stop Reddish from having an impact on the game. His defense on the perimeter looked like a that of a baby Paul George.

Reddish is Kevin Knox with defensive awareness cranked all the way up. He averages 1.9 steals per game and flexes a Defensive Rating of 91.6. There is some two-way star potential to him, especially if he is a first or second option, but his floor is a solid 3-and-D player.

The other guy: The cream always rises to the top, and Jarrett Culver continues to do just that. He has continued to score at an impressive clip, and yet again put on a big scoring performance against a blue blood.

Culver took the fight to Kansas, as he did against Duke, with an almost identical performance. The reason for Culver’s bump over the younger Romeo Langford has nothing to do with that, but more to do with the Knicks’ current timeline.

The other guy: Langford has gone through bit of a cold spell his last three games, shooting 41.7 percent from the floor, but has ironically been more accurate from deep. The key to his NBA potential lies in the development of his outside shot. His game inside the arc is already mesmerizing; he has Kyrie-esque finishing skills. But until that shot comes along, it is hard to peg exactly what Romeo can be next season.

At the time of this writing, it seems like meaningful basketball will begin next season. Operating under that belief, the case a more developed Culver becomes stronger than the enticing potential of Langford.

Culver can be trusted to come in as a utility man off the bench. He can create his own offense, play off the ball as a slasher, and rebound the basketball. Langford may possess the higher ceiling, but an accelerated timeline removes the room for hope.

The Draft Board will return after March Madness.

Read Mike’s first two editions of the draft board below: