The Knicks Wall 2021 Draft Board — Second Edition: The Vision Is Becoming Clearer 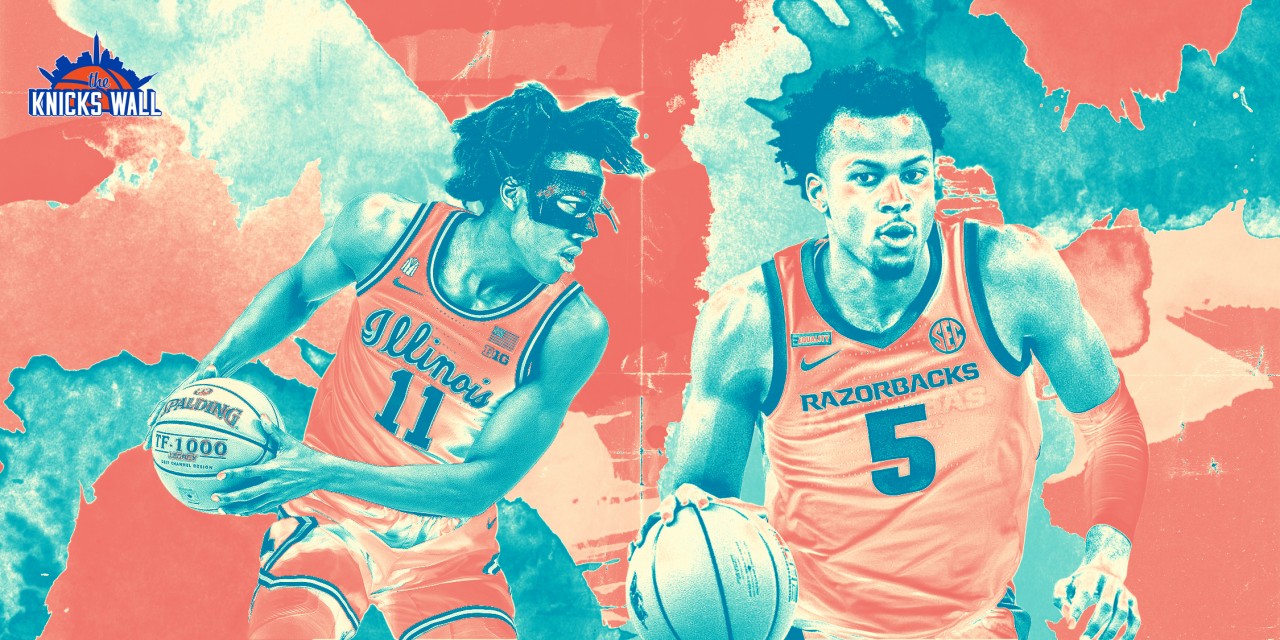 With the college basketball season nearly complete and the Knicks closer to securing a playoff spot, the 2021 NBA Draft and the team’s picks are falling into place.

Clarity is a beautiful thing. The trade deadline came, the trade deadline passed, and the New York Knicks held strong. There were no major moves out of New York other than Austin Rivers and Ignas Brazdeikis being offloaded in a minor deal that netted the Knicks a few tiny assets: Terrance Ferguson Jr. and Vincent Poirier (who would both be waived), the draft rights to Emir Preldzic, a 2021 second-round pick from the Sixers, and Miami’s heavily protected 2024 second-rounder, which Philly also sent.

The lack of major moves adds clarity to what the team’s needs are heading into the 2021 NBA Draft. Scoring talent remains the largest need, specifically on the wing. Players that can self-create are a bonus, but the evolution of R.J. Barrett and Julius Randle as playmakers has lessened the need for a pure point, especially if a superior scoring threat is available.

Another piece of the rebuilding puzzle that has become abundantly clear is the Knicks will likely not sniff the top 10 of the NBA Draft. Even with the devastating Mitchell Robinson injury, New York should make the play-in at the bare minimum and could earn a playoff berth outright as a top-six seed. Likewise, the Dallas Mavericks navigated their early-season woes and veered back into the playoff picture. These developments mean the Knicks will pick outside the top 10, and likely outside the lottery.

Unfortunately, that means we had to say goodbye to sharpshooter Corey Kispert. To no fault of Kispert or the Knicks, Kispert’s draft stock is rising as are the team’s playoff chances, decreasing the chances of the two ever joining forces. Kispert is playing himself into a firm top-10 pick and the Knicks continue to hover just outside the lottery—not to mention Luka Doncic hitting his stride and pushing the Mavs’ pick into the 20s.

But with each goodbye comes a hello. There is still a chance to slide up a few picks or fall into a good player. Most of the board remains the same, however, we do welcome a pair of names Knicks fans should get to know. Without further delay, let’s get to the board.

In reality, Moses Moody should be a top-10 pick. However, the Razorbacks’ leading scorer has mysteriously floated towards the teens in mock drafts. Better players have slid out of where they should have gone, and if Moody were to fall, landing him without using a top-10 pick would be grand larceny.

The best way to describe Moody’s game is smooth. He has the shooting touch at all three levels, can pull up off the dribble or catch and shoot with ease. He can break down a defense or spot up. There is simply nothing Moody cannot do on a basketball court.

His smoothness on offense is matched with strong defense. Standing 6-foot-6 and weighing 205 pounds, Moody can guard multiple positions and guard them well.

Not the best offensive performance from Moses Moody tonight, but he was pretty active on defense – disrupting a few plays with his length.

just started watching this year's class, so idk much about his defensive track record, but his length + activity seems very promising. pic.twitter.com/NRufrqPidL

His defensive ability is already better than some players on the Knick roster as is. Slotted next Barrett, Randle, and Robinson, the Knicks would improve one of the best defensive fronts in the league.

Moses Moody has been quiet, but his team defense is consistently solid. Immediately reacts to help the helper here and misses a big block by inches: pic.twitter.com/LXzMDuD0dh

One thing that is abundantly clear watching Moody is that he will be ready to contribute right away. He is the ideal fit to play the role of tertiary scorer alongside slashers Barrett and Randle and is a player who would fit right in with the team’s relentless ethos.

It is for all these reasons Moody warrants serious trade-up consideration. Landing impact wing players in free agency has proven difficult. The dream of the Mavs pick becoming a lottery pick is quickly fading. Packaging the excess picks to land a player who could provide similar value to a free agent signing and a slight tier below the elite in the class feels like a good gamble.

Sometimes the most obvious pick stares you right in the face. Ayo Dosunmu would be a seamless fit in New York. The important thing you need to know from the jump with Ayo is that he does not run away from pressure. Like many of the NBA’s elite players from Chicago, he too was a five-star recruit. He could have gone to a blue-blood program for maximum exposure. Instead, he stayed home to put his state back on the map and revived an uninspiring Illinois program.

Dosunmu stayed three years, improving in every metric each season while being the top option. His final season saw him lead Illinois to a no. 1 seed and surely a spot on the first-team All-American. He is clearly a student of the game, donning his black mask late this season as a tribute to Kobe Bryant. Dosunmu brought that Mamba Mentality every night, leading the Illini offense, averaging a career-best 20.1 per game, and doing it all three levels.

Dosunmu does a great job using every bit of his 6-foot-5, 200-pound frame on defense as much as he does on offense. He also brings the same level of intensity to the defensive side of the floor as well as the glass. Dosunmu pulled down 5.3 defensive rebounds this season, impressive for a lead guard.

What makes Ayo Dosunmu the best guard in the country? He plays some high level defense too. Look at the athleticism by number 11 #fightingillini #ayo #blockparty #B10 #NCAA pic.twitter.com/LcGn3F1OmT

Dosunmu’s fit in New York would be crystal clear: running the second unit. It would not be from day one, but Dosunmu’s familiarity in leading an offense can allow Immanuel Quickley to rightfully slide into the starting lineup. Dosunmu has similar fearlessness to Quickley, so it is not a stretch to expect similar production even in a rookie season.

There could also be a familiar name ready to take him under his wing—fellow Chicago legend Derrick Rose. At this stage in his career it is clear Rose is ready to pay it forward, doing so with Quickley and Obi Toppin the second he (re-)joined the Knicks. A mentorship of a fellow Chicagoan would make for a great story while helping a special player find his footing.

My only ask is for Ayo to become the next crazy eight. Austin Rivers did not do no. 8 justice, a number I believe to be a special number for the Knicks, and Dosunmu fits the profile of someone who should wear that number. He’s a player the city will love the second it meets him.

BJ Boston is officially NBA-bound. A forgettable season at Kentucky was not enough for Boston to pass up the professional ranks, and his official entry into the draft pool should put him high on the Knicks board.

Beyond the Kentucky connection, the need for a scoring wing remains New York’s highest need. One thing John Calipari did say about Boston was his willingness to put in the work. A year dedicated to development, perhaps in Westchester and New York, could do the trick for a clearly talented scorer.

If Boston could have a Keldon Johnson–like transformation, the payoff could be immense for both parties.

Although his only tournament game was a rough watch, Jaden Springer would still be a solid addition. Tennessee played poorly as a team against Oregon State, including Springer, who scored 12 points on 5-of-12 shooting in 31 minutes.

There is reason to feel bullish on Springer as a contributor. The 6-foot-4, 204-pound guard still has the tools worth a first-round pick. He has a good-looking jumper and is impressive on the defensive end.

Springer can ingratiate himself with Thibodeau not just with his defense but with his ability and willingness to use his body to overpower smaller matchups. Creating fast-break opportunities has value, as does holding your own; Springer certainly seems capable of both.

Do not get lost in the lackluster scoring numbers. Usman Garuba is a winning player.

Great example of Usman Garuba's winning impact in Real Madrid's victory over Malaga: 6 PTS, 8 REBS, 2 STL & 2 BLK in 19 MIN, highlighted by this game-clinching rejection from the weakside. Has limitations but motor and defensive instincts almost always shine through. #7 in 2021. pic.twitter.com/yo86ISk8rN

The injury to Mitchell Robinson was the prime example of why the Knicks should not put off adding another frontcourt presence. Garuba could play the wing or small-ball five. He can step in and immediately add the dynamic Taj Gibson already brings.

Garuba is wise beyond his years, always seeming to know where to be. The less time Tom Thibodeau has to spend yelling at you, the more he seems to like you. Garuba would almost certainly be a Thibs favorite from day one.

The strong instincts and ability to move without the ball will allow Garuba to have an easier time adjusting to NBA life. If Garuba’s offense can evolve to where he is a decent threat to pull a corner three, he will fast track himself into the core.

The TKW Draft Board will return…