The Most Underrated Clutch Shots in Knicks History 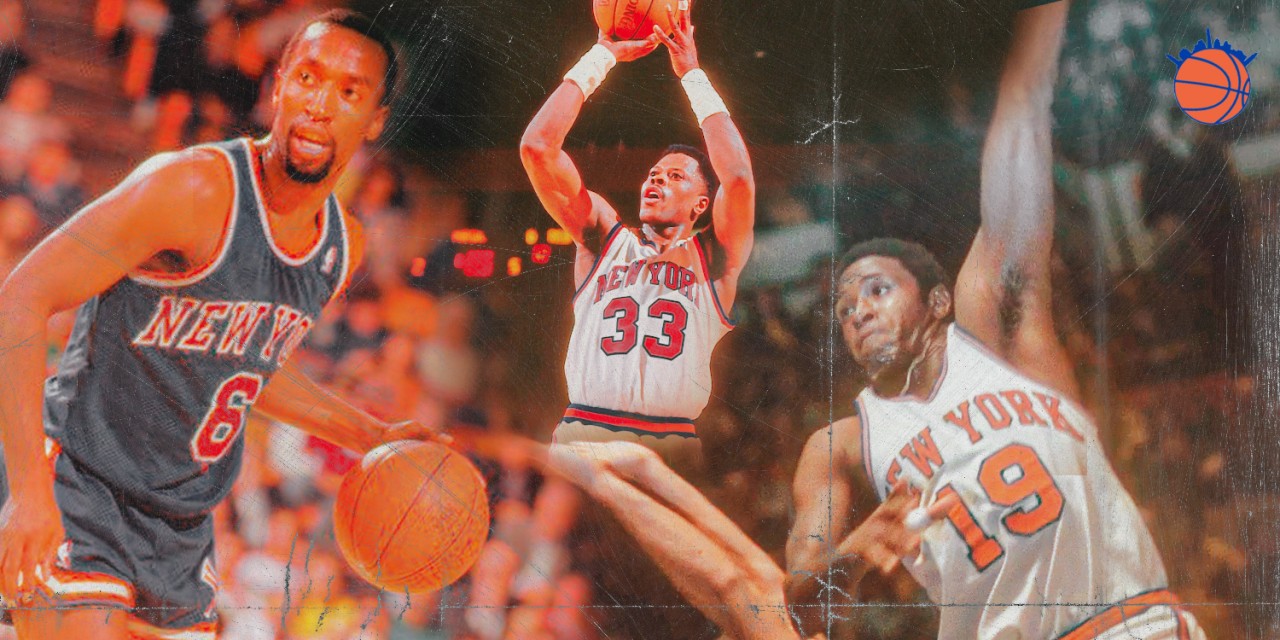 The signature Knicks moments are still re-played as often as ever. But what about some of the lesser-known clutch shots in franchise history?

If you’re a New York Knicks fan, you know about Willis in ‘70. You’re familiar with or remember Allan Houston in Miami, Linsanity hitting Toronto, and Carmelo vs. the Bulls. You’ve seen LJ’s 4-point play and Starks’ dunk, likely a million times each.

Outside of the early ‘70s, the ‘90s, and a brief stretch with ‘Melo, the Knicks—as you also surely know—haven’t produced a ton of iconic, victorious moments. Accordingly, the franchise and its fanbase has milked those classic highlights for years, replaying them in our memories, recounting them in the discourse, and re-watching them via MSG highlight packages.

To this day, Knicks fans celebrate the great moments of the past as often as they discuss the current state of the team. However, there are a handful of notable clutch baskets that don’t garner the same attention, for myriad reasons. Let’s change that, at least for the duration of this article.

Basketball-Reference lists every game-winning buzzer-beater dating back to 1946. The first Knickerbockers (est. 1946) buzzer-beater came on December 10th, 1949, when the legendary Dick McGuire hit a short bucket in overtime to give the Knicks a 93-91 victory over the Chicago Stags (suck it, Stags!).

Another contemporary of McGuire, Carl Braun, remains one of the most underrated players in franchise history—and one of the most clutch. In a 21-point, seven-assist performance on January 14th, 1950, Braun nailed a shot to give the Knicks an 82-80 win over the Boston Celtics.

Braun did it again that March, this time from 30-feet away to defeat the St. Louis Bombers in overtime. Four years later, in January of 1954, he sank a jumper with one second left to defeat the Philadelphia Warriors for his only bucket of the night.

To this day, Braun is the NBA’s all-time leader in game-winning buzzer-beaters.

Braun’s teammate, Vince Boryla, also hit two buzzer-beaters during the decade, both from way downtown. On December 18th, 1951, he nailed a 30-footer to beat the Minneapolis Lakers, then the sunk a 40-footer on January 27th, 1953 against the Rochester Royals.

Boryla ranks second to Vince Carter on the all-time list of 30-plus foot buzzer-beaters. Unclear if they were set, hook, or jump shots, as Boryla had it all in his arsenal.

On Christmas 1969, the Captain, Willis Reed, celebrated the holiday with the only game-winning buzzer-beater of his illustrious career. With one second to play and the Knicks trailing by one point, Red Holzman reached into his back pocket and drew up a Hail Mary on her son’s birthday.

As Stuart Miller wrote in The 100 Greatest Gays in New York Sports:

“Red Holzman called his ‘one-second play’ knowing full well that it rarely worked — even in practice Walt Frazier often lobbied the pass over the back-board by mistake. But after Dick Barnett set a screen to free up Willis Reed, Frazier hurled a bomb that would have made Joe Namath proud. Reed took two steps and soared, laying the ball in at the buzzer, 112-111. A Merry Christmas and Happy Championship Year to all.”

The bucket capped off a 33-point, 15-rebound performance from Reed, who would win the All-Star MVP, regular-season MVP, and Finals MVP that season.

The Bulls led, 85-84, with six seconds to go. Ewing set a screen for Trent Tucker, who dribbled to his left and bricked a long two. Ewing, waiting just short of the elbow, secured the rebound and softly flung the ball back into the basket as time expired.

His heroics caused festive Garden-goers to flood the court, which you could just do in those days.

In seven NBA seasons, Louis Orr was 3-for-36 in his career from downtown.

However, what his Basketball-Reference page won’t tell you is that one of those threes sent Madison Square Garden into absolute bedlam. In a January 19th contest against Larry Bird and the vaunted Celtics at their absolute apex, the Knicks found themselves down by two with a few seconds on the clock and the ball in the backup power forward’s hands—not ideal.

After Kevin McHale hit two free throws to tie the game, Ewing inbounded the ball to Orr. The forward calmly dribbled down the court and went right like Kobe on Phoenix. He pulled up at the top of the arc, elevated over Bird, and heaved a rainbow in the general vicinity of the hoop. Miraculously, the ball hit the backboard square and splashed home to deliver the Knicks a 111-109 victory.

In the first round of the ’88 playoffs, the Knicks swept Charles Barkley’s Philadelphia 76ers in three close games, outscoring Philly by eight total points. Shooting guard Gerald Wilkins capped a career-best series with his finest moment as a Knick.

With 12 seconds to go in game three and the Knicks down by one, Wilkins received a pass at the top of the arc, took a hard dribble right, and pulled up just inside the line. His leaning jumper swished home to secure a 116-115 win and move the Knicks into the next round.

Nobody in Knicks history has hit more improbable end-of-game baskets than Tucker.

The 1987–88 Knicks, under Rick Pitino, were heralded as the “Bomb Squad” for their three-point shooting prowess, so perhaps it makes sense that they produced two notable game-winning threes in the same postseason.

In Game 6 of the conference semifinals against Chicago, Tucker drained what I can confidently say is the second-most clutch playoff four-point play in Knicks history.

The Knicks trailed by four with nine seconds remaining, but Pitino drew up a slick inbounds play to free Tucker off a screen. In a shot that looks straight out of the 2020 bubble, he pulled up quicker than expected and nailed the jumper while drawing a foul on Craig Hodges.

The legacy of Tucker’s bucket was quickly diminished, as the Knicks would lose the game (and series) after two Jordan free throws and a missed Johnny Newman shot in the ensuing seconds.

However, Tucker was not done building his clutch CV.

You might’ve assumed David Lee’s game-winning tip shot with 0.1 seconds left against the Charlotte Bobcats in 2011 would not be included on this list, considering its fame and recency. You would be right (besides in this paragraph). You may also have rightfully assumed that Lee’s basket is the only such play in Knicks history. You would be wrong.

On January 15th, 1990, Tucker got some sweet (regular-season) revenge on the Bulls. At 106-106 with a tenth of a second left in regulation, Tucker snagged the inbounds pass from Mark Jackson and, literally impossibly, spun around and hoisted up a three before the clock buzzed. It went in.

In the aftermath, Chicago head coach Phil Jackson filed a protest with the league, leading to the adoption of the “Trent Tucker Rule” before the 1990–91 season—which limited field goals with under 0.3 seconds remaining to tip-in. To this day, Jackson believes his Bulls were robbed.

But Tucker still wasn’t done. One year later, he sank his final wild buzzer-beater against the Detroit Pistons on March 6th. After Joe Dumars tied the game with 2.5 seconds left, Tucker received the inbounds pass in front of the Pistons bench and reverse pivoted into an awkward turnaround. Tucker’s prayers were answered again: the ball kissed off the glass and dropped through the twine as Tucker fell into the Pistons bench.

This shot would be the franchise’s last game-winning buzzer-beater until John Starks beat the Phoenix Suns in 1997.

Throughout Ewing’s final season in New York, the Hall of Fame center had to deal with constant fretting about his feasibility in the postseason (after the ’99 Finals run with Marcus Camby in his place), and speculation about his looming contract situation.

Despite the doubts, the 37-year old had an admirably solid season. He started 62 games, averaged 15.0 points and 9.7 rebounds per game, and was the team’s go-to man in the clutch on multiple occasions.

Ewing would be traded that summer, but not before producing one final classic moment at the Garden. In the final days of the season, on April 10th, Ewing sank a patented fadeaway over Dale Davis with two seconds remaining to beat their heated rival, the Indiana Pacers, 83-81.

On November 8th, the fifth game of the season, the Knicks were tied at Denver, 106 all. At that exact moment, the altitude seemingly got everybody high just in time for the game’s final sequence.

Crawford attempted and failed to shake and bake Carmelo Anthony, and instead tossed the ball back to Denver. To remedy his mistake, Crawford chose that moment to see what defensive effort felt like, and managed to steal the ball back from Eduardo Najera. In typical Crawfordian fashion, he took a few dribbles before prematurely launching a falling-down 28-foot rainbow, which fell through with 3.7 seconds to go.

As with every clutch sports moment, this ridiculous shot was made even more enjoyable thanks to Gus Johnson absolutely losing his mind.

In general, the mid-2000’s Knicks hit more clutch buckets than you might think, considering how few games they won (see: Lee, Nate Robinson, Stephon Marbury, Steve Francis). However, the strangest one undoubtedly came from the $60 million man himself, Eddy Curry—who, for one glorious spring night in Milwaukee, was worth all the money in the world.

On April 8th, the Knicks trailed the Bucks, 102-99, in the final seconds of regulation. Isiah Thomas, that galaxy-brained mastermind, knew just who should take the final shot: Curry. And sure enough, it worked. Curry swished a triple in front of the Knicks bench to tie the game, and the Knicks won in overtime.

You may think I’m being facetious and this outcome was a fluke, but, according to the postgame comments, Thomas actually did look to Curry for the game-tying three, as the big man was in the midst of a career night.

“He asked me if I had one in me and I said, ‘Yeah,’” Curry said. “It felt good leaving my hand…I really couldn’t believe it, man. It was incredible.”

Curry shot 17-for-20 from the field that game, posting 43 points and 13 rebounds in his performance as a Knick. However, he had only attempted one career three-pointer—which, to Thomas, was exactly the point.

“It was designed for Eddy,” Thomas said about the play. “I didn’t think that they would guard him. I’ve been telling him the whole season I was going to design a play for him to shoot a 3 and win a game for us. I took a timeout and said, ‘Now’s the time.’ We drew it up and he knocked it down.”

Technically, Curry finished his career tied for the highest career three-point percentage in NBA history (2-for-2).