The New And Improved Frank Ntilikina: Work the Post 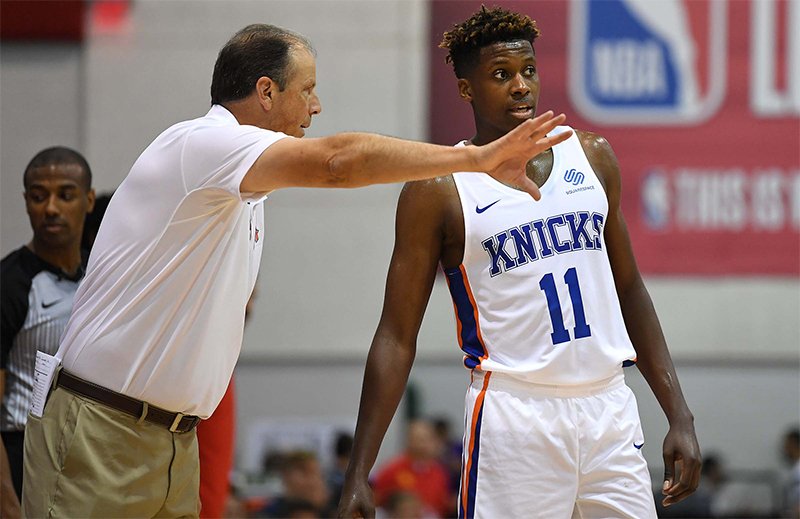 Could the young Frenchman make a new home in the post? His play in Summer League suggests that we shouldn’t rule it out.

Frank Ntilikina, our 19-year-old sophomore guard, has simultaneously been adopted as a folk hero and become a lightning rod for criticism in his one full season as a New York Knick. As obvious as his defensive skills have been, his offensive limitations are just as blatant, which has led to persistent questions about his ceiling as a player and what position he should play.

Frank’s weaknesses going into this offseason were well publicized: ball handling, turnovers, shooting, shot creation, and penetration. In a word, offense. All of these individual skill areas were wrapped up in and accentuated by an uber-critique that Ntilikina was much, much too passive on this side of the ball. This paints the picture of a very flawed basketball player, and to a degree, justified the constant and loud criticism of the Knicks project at point guard.

While the weaknesses were real, and the critics somewhat justified, there was a reason for the aforementioned folk-hero adoption of our French son. Frank is a worker. He heard the negative noise, and was well aware of his weaknesses, and spent the summer sweating his way to changing the narrative. Working with skills coach Chris Brickley throughout the summer, Frank started to address the areas of on-court development essential to his growth as a player.

The new head coach has been preaching and pushing for an aggressive Ntilikina since taking the reigns of the Knicks. As a result, any Fizdale effect was much anticipated heading into Summer League, with the transformative power of the point guard whisperer sure to produce a scoring bonanza of sorts. Right?

Frank started with a whimper rather than the anticipated bang, in a familiar and offensively tepid debut against the Atlanta Hawks—five points, three rebounds, five assists—which gave rise to equally familiar cries for a more aggressive Frank.

This call for aggressiveness has been so frequent and loud in the last 12 months that it’s difficult to know what it means now, with an image of peak-aggressive Frank something like our teenage French son storming into the paint at every opportunity with limbs flailing and eyes red with a possessed aggressive rage. He’d be muttering “buckets” repeatedly under his breath, in French, like some continental mantra to his inner Mamba.

Aggressiveness screams of buckets whatever the cost, inefficiency and running the offense be damned, which is not the mentality the best version of Frank will eventually have. Can we run with offensive assertiveness instead? There is a difference. Scoring point guards in the image of scorched earth Russell Westbrook are not the only type of point guard. There are pass-first Mark Jackson types too, who are much better mentality models for Ntilikina.

The Knicks second summer league outing, against the Utah Jazz, featured a much improved Frank, who racked up 17 points and six assists on 50 percent shooting. It was a controlled, balanced, mature performance, and all together a more assertive outing for the 19-year-old. On top of a couple of downright artful, thread-the-needle, pocket passes to the large human piece of elastic otherwise known as Mitchell Robinson for easy dunks, Frank displayed an impressive nose for scoring.

Our French son knocked down seven shots against the Jazz. There was a catch and shoot three from the right wing, a driving layup through and over a smaller defender—an assertive move, some may say—and a silky soft touched floater in the paint over a helpless Jazz big. These were all nice, but the other four field goals may be the more sustainable staples of Frank’s offensive arsenal going forward, with all four involving one or a series of dribble spin moves into fallaway jumpers over the top of smaller defenders.

This looks like the beginnings of a go-to move for Ntilikina, who when asked about the move after the game said with a smile that, “it feels good to have it back in the game, and of course I will keep on working on that because I know, with my size, against little guards it will help me a lot.” With Frank reportedly still growing, now standing at 6-foot-6, he definitely has an advantage in the post, and seems comfortable in and around the paint shooting over defenders.

If he can knock these shots down at a high percentage, turning the move into something like the midrange weapon taller point guard Shaun Livingston has mastered in his career, it will be a significant stepping stone in his offensive development. As impressive as the shots themselves was the tight handle he used to manouver to his spot, always using a spin move or two, reminiscent of the way fellow Frenchman Boris Diaw used to nonchalantly penetrate from the perimeter.

Diaw’s approach, while notably slower and more derriere-centric than Frank’s, nonetheless leveraged a similar raw size advantage. As Frank is bigger than the guards defending him, keeping them on his back and using his frame as protection for a developing handle while spinning and winning his way to his sweet spot is a smart play.

Even when not dribbling into the post, it’s an intriguing wrinkle for Fizdale to incorporate into his offense. Having Frank post up in sets where the floor is inverted with bigs who can shoot on the perimeter and his point guard down in the post is a novel concept. Post touches will utilize a unique facet of Frank’s game, while building his confidence up through reps from a position on the floor where he looks to be most comfortable.

It will also suit Fizdale’s system, which uses the post to generate inside-out three’s (on which shooting percentages jump up). With Memphis, Fizdales offense led the league in post-ups, and with Enes Kanter, Kristaps Porzingis (when he returns from injury), and now Ntilikina as options down low, the post-up is far from dead and buried in New York.

As is often the norm for second year players in the Summer League, the Knicks seem to have shut down Frank for the remainder of the tournament. Many Knicks fans are glad he played the two games he did, for a glimpse and taste of the new and improved Ntilikina. The contrast between his offensive production against Atlanta and then Utah are a reminder that consistency is a long way off, and fans should be mindful of this when drawing definitive conclusions from good and bad stretches in his upcoming sophomore season.

One thing we can be sure of, though, is that Frank is far from a finished product. We may not see the best of Frank for a few more seasons, when he’ll still only be 23 years old. Factor in a handful more summers of hard work and the future is a bright one for this teenager from France, who is merely scratching the surface of his potential.