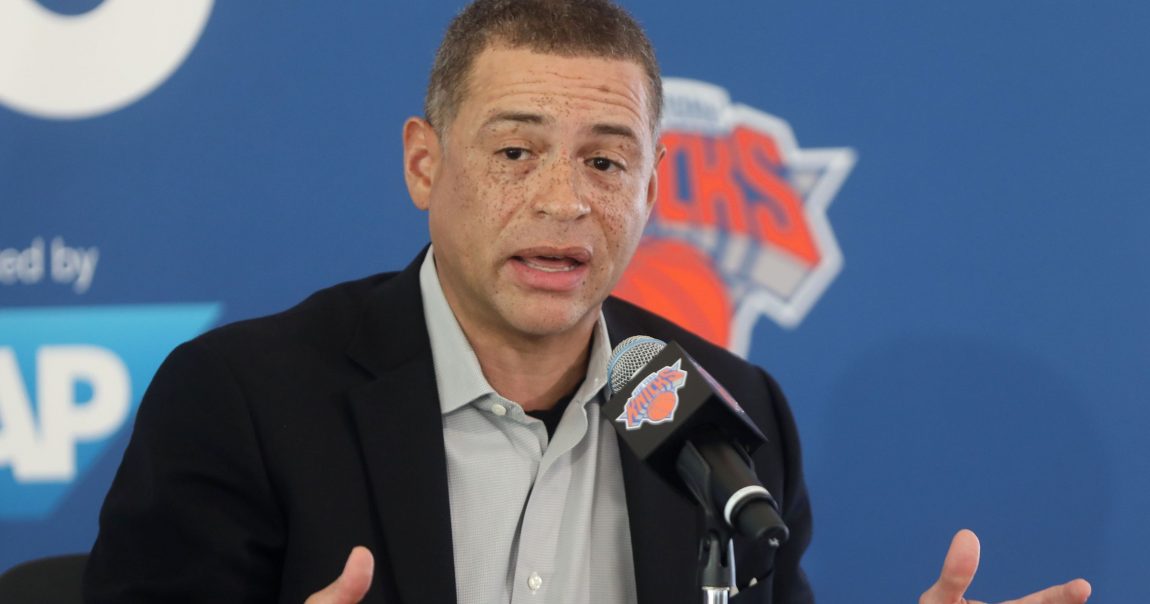 What kind of role has Scott Perry played in washing away the sins of past New York Knicks’ regimes?

Summer League is underway and the Knicks’ fanbase is buzzing louder than it has in some time. Kevin Knox’s exciting debut in Las Vegas has everyone all in on the rookie. Fellow 2018 draftee Mitchell Robinson has turned some heads too, with both making their case to be a shiny new addition to this young New York core. While these two interesting developments are great for the franchise, they’re the effects of a culture overhaul that even the likes of Stephen A. and Max Kellerman can (begrudgingly) agree on. Over the past year or so, the Knicks have rehabilitated their image from the perspective of NBA players and the league at large, and the biggest dividends from this transformation are yet to come. This rebranding requires a contextual analysis of the franchise’s teardown and subsequent structural rebuild.

Before getting to the new pattern, we must examine the old; specifically, the last few bad deals the Knicks made. As chronic over-spenders, James Dolan is the patron saint of bad contracts and bad trades. A decade of giving up too much and begging for too little put them in No Man’s Land where the only logical next step would be for Phil Jackson to overpay Joakim Noah. We would be remiss to cast blame solely on Jackson since Steve Mills was present for his tenure and was the culprit of the Knicks final two bone-headed contracts: Tim Hardaway Jr.’s egregious offer sheet and Ron Baker’s two-year deal with the second being a player option that essentially gave him a no-trade clause. In retrospect, Hardaway Jr.’s four-year, $71 million pact isn’t as terrible as it once seemed, although it did maim the Knicks’ flexibility for the foreseeable future. Hardaway Jr. had a decent first year as the premier scoring option at the wing last season, but Baker having a player option and a no-trade clause is the big misstep that encapsulates the full Knicks experience. Fortunately, Mills’ final two moves paved the way for eventual overhaul that led to new general manager Scott Perry.

It was here, with the hiring of Scott Perry, that the Knicks’ culture began its change. Perry, a long-time front office executive whose clout is grounded in authenticity, became the big name. A Dolan and Mills joint-decision, Perry subsequently has become the best thing to happen to the Knicks since Kristaps Porzingis laced up his sneakers in orange and blue.

After coming on board in July of 2017, Perry hasn’t signed any NBA veteran to a deal longer than a full NBA season in free agency.

The Knicks were obviously strapped for cash at the time, but Perry demonstrated constraint by not pushing for an unfavorable trade to thwart any potential cap space down the line. He needed roster spots filled and scraped the bottom of the barrel. Subsequently, as the new year began, Perry set his real plans in motion with the waiving of Ramon Sessions and a few signings that may do more than keep the Knicks between 12 and 15 players.

The allure of ‘second chances’ and ‘player development’ became the apparent philosophy for the Knicks, especially when Porzingis went down. The PR-friendly notions of hard work paying off was reinforced by his use of G League transplants Isaiah Hicks and Luke Kornet. Adding Kornet and Hicks to the rotation in the wake of Porzingis’ tragic injury was a commendable PR move that added polite claps to Perry’s resumé. However, giving Trey Burke a shot in the backcourt may have been his ace-in-the-hole from the beginning. He was the perfect poster boy for the rebrand. Who doesn’t love an underdog? And when he balled out in that final third of the season, it made Perry both a front office wizard and a benevolent ruler. Troy Williams bolstered the Knicks’ athleticism as well, at least giving the tail end of another lost season a watchable finale.

The mantra of player development and a no shortcuts long-term approach to success was turning out to be more than lip service, and people were watching. Mills, a long-time front office executive for the Knicks, is easy to boo, but a well-respected front office lifer like Perry was another story. People like to laugh at the Knicks, but when Perry became the face of the organization, everyone’s tune changed. Essentially, Perry became the rebrand from the moment he signed on, and since that moment he has had his sights set on a big 2019 free agency.

With every trade Perry has made, the move can be attributed to at least one of three key principles, whether he had direct control or not:

Trading Carmelo Anthony was easily Perry’s toughest battle, one in which he did not come out unscathed, but he did stick to the principles outlined above:

Player-centricity: With his no-trade clause and a win-now mentality, Melo wasn’t going anywhere with a gutted roster. Eventually, Sam Presti locked in Russell Westbrook and Paul George, making it easier to convince Melo (and the league) that it was obviously a favorable choice for an aging forward.

Cap flexibility: Most of the trades possible would have stuck the Knicks with a long-term salary, like Ryan Anderson’s contract that has him making over $20 million through 2020. Of viable teams, the Thunder had the best return in maintaining long-term cap flexibility since the duration of contracts were arguably the same. Melo appears to be parting ways early, but if the Knicks aren’t required to utilize their stretch provision or just throw salary into the wind, it’s still a win over their trade partner.

Modernity: Enes Kanter is an old school center just as Melo is an outdated volume shooter, but the versatility of Doug McDermott as a cutter and three-point shooter fit the mold of the modern NBA player to a T. His only season in New York wasn’t especially riveting, but it was enough to secure him a multi-year deal in Indiana.

Today, it’s obvious that the goal wasn’t to get a return on the Melo trade. Robinson was a lucky strike in a hasty deal that was made to appease Dolan while keeping the books roomy for 2019. As for flipping McDermott for Emmanuel Mudiay in February? It looks like a second chance for Mudiay, a struggling former lottery pick, but it is merely a placeholder for cap space, his rookie contract ending at the end of the 2018-2019 season. Mudiay will have the chance for a long-term contract in the NBA, but, as I’m sure the Knicks’ savvy general manager has already decided, that contract won’t come from the Knicks.

Perry has been playing chess since day one.

When the Knicks dealt Willy Hernangómez to Charlotte in February, many were upset that the Knicks were giving up on a young, promising big. Despite the outrage, Scott Perry played this one perfectly:

Player-centricity: Willy’s situation, while different from Melo’s on multiple levels, allowed Perry to display a certain level of respect for players by taking note of their wishes. Sending him to Charlotte in exchange for Johnny O’Bryant, who would be waived, was a favor Perry did out of pure mercy. Willy’s uptick in minutes wasn’t drastic, but by that time Perry had done his job. The two second-round picks gained from the deal wasn’t too shabby either.

Cap flexibility: Waiving Johnny O’Bryant the day following the trade was a no-brainer. Not much here besides Perry refusing to be greedy and asking for a prospect of equal value. While Hernangómez is only slated to make $1.5 million through 2020, and every dollar counts for all 15 of the roster spots. But the real value in the trade can be found in modernity.

Modernity: Hernangomez is a center quintessentially of the same ilk as Enes Kanter, marking him as redundant to the roster. Through the lens of Perry’s long-term plan, neither Kanter or Hernangómez are only visitors in Madison Square Garden, making the 2020 and 2021 second-round picks wards of his own regime.

The Willy Hernangómez trade was his first deal uninhibited by a now-quiet James Dolan. It was an early sign of his commitment to the long game and the signings mentioned earlier either built a cost-effective bench for the future or simply hold money in place until it can be utilized for a more potent player.

Perry was gifted a dumpster fire by Phil Jackson. He doused the flames and put a welcome sign with a David Fizdale fathead smack-dab in the middle. Mario Hezonja busted through the door like Kramer from Seinfeld in order to sign up. The details of Hezonja’s rumored offer from the Portland Trail Blazers hasn’t come out yet, but the fact that he declined a multi-year opportunity to sign a one-year contract with the Knicks is imperative to Perry’s narrative.

With that seemingly meaningless signing on the tiny desk, Perry and company tasted a bit of what they need in order to land their muse in 2019: desire. Hezonja’s desire to play for New York is rooted in two areas: self-actualization and culture.

The first part of Hezonja’s desire that Perry pinpointed was self-actualization. Self-actualization includes growth and reaching one’s ideal self, things Hezonja obviously craves after a disappointing start in the NBA. He still wishes to live up to the “Croatian Kobe” image he cultivated before the draft. Whatever the Blazers offered him wasn’t enough, whether it in terms of finances or his role on the team didn’t adequately feed his ego. A one-year deal where Fizdale said, “You keep what you kill”, is the exact situation that Hezonja, who was buried on Orlando’s bench at one point last season, desires. New York is offering him a shot at proving he’s worth the money he believes he deserves.

Culture, the second part of Hezonja’s decision, begins with Perry, one of the front office executives responsible for drafting Hezonja. Perry approached him after both have had multiple years of separation, with amicable yet less than favorable exits from the Magic organization, at least from their side of the table. And the culture aspect closes the deal with the sweetener the Knicks have locked up for the next four seasons: David Fizdale

Fizdale’s promise of a run & gun coaching style was part of the pitch that enamored Hezonja when it came to his duties on the court. A modern offense is a great look, and it goes hand-in-hand with Perry’s management philosophy on signings—Fizdale is as player-friendly as they come. In the immediate aftermath of his firing, a handful of future hall-of-famers tweeted in protest. They’re just tweets, but Perry recognized that when the most high profile ‘Coach Killer’ in the sport comes to your defense, your reputation is so sterling it could polish a turd, and indeed it did.

With ample cap space open for 2019 free agency, and the possibility of even more in 2020, Scott Perry has transformed the Knicks’ reputation from incompetence to growth like an expert manager. On court flubs are no longer mistakes—they’re learning opportunities. Unwanted underperformers aren’t cysts—they’re professionals who deserve to control their own destinies (ie: the nicest way to say GTFO). Over the past year, Perry hasn’t just given the Knicks a makeover with the rebrand; he put them through plastic surgery. His three tenants for favorable trades (modernity, cap flexibility, and player-centricity) combined with his specific criteria for signings, whether they be call ups for players with a chip on their shoulder or enticing free agents with the allure of Fizdale, creates a well-rounded philosophy, especially for a new GM. and a The organization still has a lot of work both on and off the court to complete, but if Perry can make Dolan disappear for a whole season, his next trick should be a doozie.