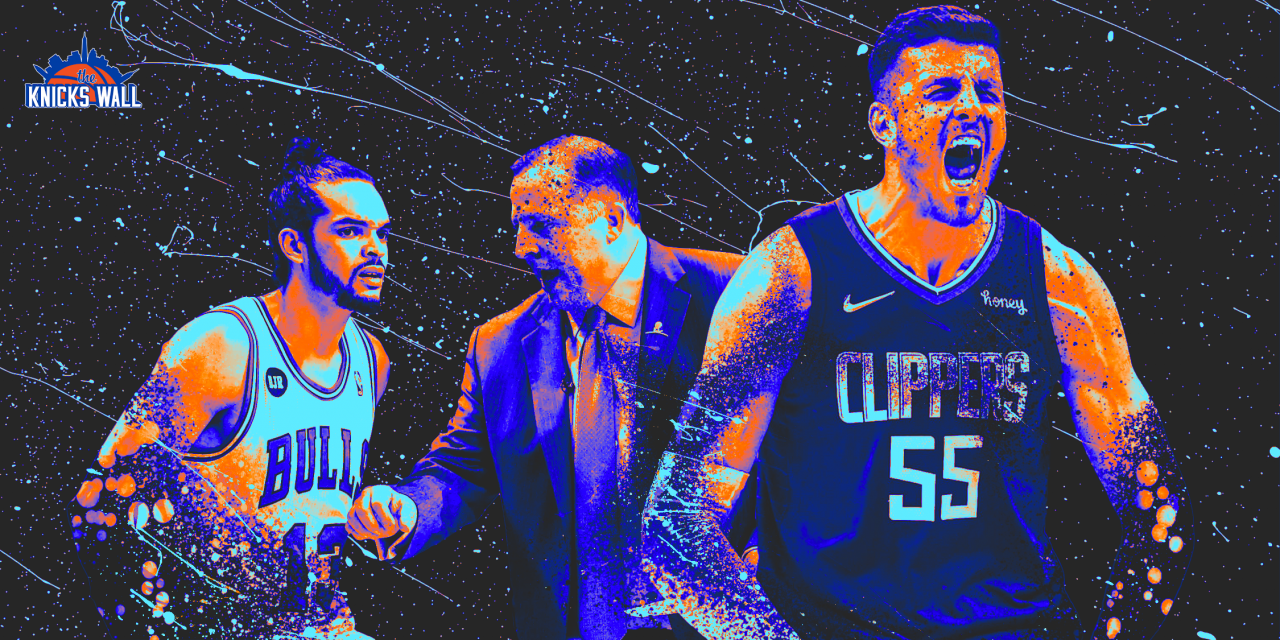 The skill set Isaiah Hartenstein has on offense is reminiscent of another big man Tom Thibodeau used to coach: Joakim Noah. Let’s explore that comparison and what it means for the Knicks.

As we approach the opening of the New York Knicks’ 2022-23 regular season, few pieces seem to be a mystery for the squad looking to rebound from a disappointing 2021-22 campaign.

For starters, we know we’ll still have old reliables in RJ Barrett, Julius Randle and, probably, Evan Fournier as a part of their starting lineup. Jalen Brunson, one of the very few new faces on the team, will be the starting point guard for the team. And, most likely, Mitchell Robinson will be anchoring the defense at the center position after just signing a contract extension with the team this past offseason.

The Knicks’ bench is pretty much the same, too. Derrick Rose and Immanuel Quickley will look to continue manning a very successful second unit featuring a sharpshooter in Quentin Grimes and a question mark full of “allure” in Cam Reddish.

One piece really stands out, though, and that would be one of New York’s offseason signings: Isaiah Hartenstein. I-Hart, who plays the center position and has had a few solid years under his belt playing for the Los Angeles Clippers, Toronto Raptors, Cleveland Cavaliers, Denver Nuggets and Houston Rockets before signing here, adds depth to a position which, frankly, already seems fleshed out. Between him, Robinson and Jericho Sims, the job at center seems to be spoken for on every level.

That’s where head coach Tom Thibodeau comes in. Thibodeau, in his time with the Chicago Bulls, had a comparable center to work with as a pick and roll specialist and great passer in the paint in Joakim Noah. As I type that name out, I feel Knicks fans getting ready to rage quit out of this page and tweet about how even thinking about Noah brings shame to this piece.

But hear me out.

A complement to versatile wing players on the floor

Both Isaiah Hartenstein and Joakim Noah have shown the ability to launch off pick and roll action and have the quick thinking to get the ball off to an open player in the corner or to a high-flying wing player who can cut through traffic with ease.

For Noah, this often came in the form of a player like Taj Gibson who would play with Noah as the true center, with Noah playing more as a forward-center. If it wasn’t Gibson who Noah would dump these passes off to after drawing his defender more into the paint, it would be someone who could actually shoot from distance like Kirk Hinrich.

Hartenstein has shown a similar ability to find the open man off a good pick and roll during games. You can only imagine the power it’d hold if Hartenstein and Obi Toppin, for example, were put on the court together, with Toppin as a great cutter and flier adjacent to Hartenstein, who would just be looking to draw attention away from the paint as he is a threat from deep.

You could also see Hartenstein really finding that groove with a point guard like Immanuel Quickley. Quickley shouldn’t necessarily keep shying away from rim, as he did get stronger this offseason in order to start working on his finishing skills. But with I-Hart able to draw that attention away from the sharpshooter, IQ could easily capitalize off the catch and shoot potential opening up with him on the court.

One of the challenges that Isaiah Hartenstein could face entering this season is making an impact off the bench. We know Robinson will likely be the starting center, with Thibodeau rarely making any adjustments to his rotations. That being said, the Knicks’ bench is not to be balked at. They were consistently better than most bench units the entire season before injuries forced some bench players to start games. Adding someone at the center position like I-Hart is a huge boost to an already stacked backup core.

Noah, while not a bench player with the Bulls, was able to provide a similar spark. His ability to direct traffic between himself, another big in Gibson and three other players was special. Hartenstein contains the same ability and could take pressure off of both Rose and Quickley as they help to navigate such a young bench.

Hartenstein has shown the ability to do this already with the Clippers, throwing defenses off balance as they pay more attention to him holding the ball towards the top of the key while the rest of the Clippers’ offense is running around them, open for a pass from Hartenstein.

This is really attractive on paper with a lineup that could include players like Toppin and Reddish, both of which can really take off from mid-court while Hartenstein tricks defenses into focusing on him.

Aside from both Joakim Noah and Isaiah Harteinstein’s ability to pass well under pressure and their ability to really pop off the pick and roll with a reliable point guard, they are both able to score pretty consistently.

Noah was by far the better midrange shooter of the two, averaging above 40% from there before his final season with the Bulls. That was due in part to all of the skills mentioned above – the ability to move off of screens and rolls with ease and open up space for himself and others – and in part due to his aggressiveness and size on the court.

Hartenstein, by contrast, is a mixed bag. Last season with the Clippers, he took a huge jump with his shooting from three-point range, going from just a 33.3% shooter from deep to a 46.7% shooter. To be fair, he did not really take that many from that distance, but it’s still nice to look at with Robinson and Sims not being well known as stretch-fives.

Hartenstein is also solid at the rim, which should be a given considering his size. But he also took a jump, once, from midrange, during his time with the Cavs. So, the ability to shoot from the field is there. Perhaps it’ll be unlocked again with better spacing with the Knicks’ bench unit.

Again, I apologize for bringing Joakim Noah to the forefront of your minds. While his time with the Knicks was all but exciting, his time with the Bulls certainly gives us a glimpse into how Thibodeau may be planning on utilizing Isaiah Hartenstein this season. And, that glimpse might be one of the very few bright spots to look forward to under the Thibodeau regime.

Read: The Knicks Must Prioritize Development