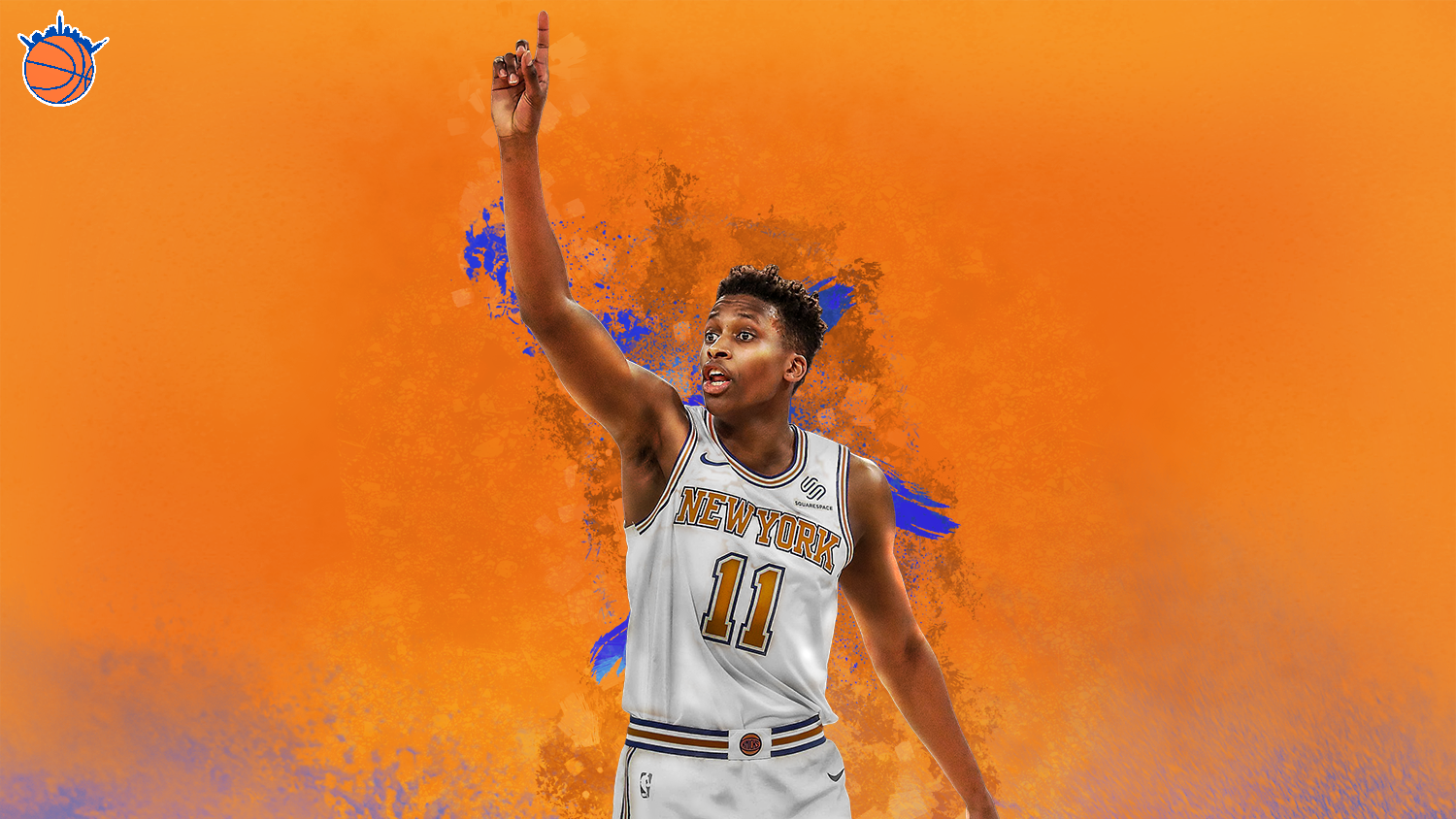 The position debate surrounding sophomore Frank Ntilikina is profoundly unimportant. Let’s dive into how we can measure the Frenchman’s success in year two.

I’m referring, of course, to how much we Knicks fans love to talk about Frank’s correct, proper, and fixed for all eternity position on a basketball court.

This seems to be the most irresistible and controversial question, on the court at least, heading into the season. Like most, I have swan-dived down this rabbit hole a few times since our beloved Frank entered the collective Knicks consciousness. For a number of reasons, though, it’s a kind of dumb rabbit hole.

Firstly, it’s worth remembering how little we have to talk about heading into the season. We are starved of current on-court talking points, in a rebuilding year, without Kristaps Porzingis, devoting a hefty amount of psychic energy to willing into existence Kevin Durant’s introductory Knicks press conference next summer.

These are all fun to talk about but essentially unanswerable questions. Frank’s positional status is pending. He neither definitively is, nor definitively isn’t a point guard. In all likelihood, 24-year-old Frank will be very different to 20-year-old Frank. The only real reason to get bent out of shape and devote angry, disbelieving Twitter characters to anything related to Frank’s sophomore season is if he’s not playing enough. Everything else provides too partial a picture of the player he’ll be in a few seasons to say anything for sure.

That sounds boring, I know. So what are we supposed to talk about?

Here are three positionally independent areas of development to look for and get excited about from our handsome French son in year two. In order of increasing and wholly appropriate excitement levels; 1) Improved shooting: he’s a surefire NBA starter as a three-and-D stud. 2) Improved turnover percentage: he’s the second coming of 2018 postseason Jrue Holiday. 3) Shot creation: buy a plane ticket and make a pilgrimage to France to give thanks.

Frank, in his rookie season, shot like a rookie. The numbers aren’t pretty; 43.2 percent effective FG percentage (eighth percentile), taking a massive 35 percent of his shots from dreaded long-two range (98th percentile) and converted only 33 percent of these shots (31st percentile). He shot a not-terrible for a rookie 32 percent from deep, though, and figures to take more threes with Fizdale at the helm.

Already, in preseason, he’s looked more confident stepping into long-balls, which if sustained through the season, will be a massive development in his game.

If you can defend, and shoot threes, you’re an NBA player. End of story. Now, I don’t know if you’ve heard, but Frank is pretty instinctively great at this whole defense thing. His defensive foundation should be the starting point for every Ntilikina evaluation, because his potential to be legitimately elite on that side of the ball raises his floor as an NBA player astronomically. If he gets to 37-38 percent from three, coupled with that defense, we’ve got a career NBA starter, with an eighth pick that—as evidenced by the current Knicks roster—far from guarantees NBA starter value.

Small things: Peep the recovery on defense by Frank in the corner. Cuts off the baseline after a beautiful recovery, forces the ball back out up top. pic.twitter.com/6r0pnHpFPV

Obsessing over Ntilikina’s warts as a potential point guard focuses on the pitfalls of him reaching his highest possible ceiling, whilst overlooking the reassuring reality that—modest shooting development permitting—his lowest possible floor will be pretty damn valuable.

Frank gave the ball away at a cringe-worthy rate last year, on a whopping 18 percent of his possessions (sixth(!) percentile). This is arguably his biggest offensive weakness. Even more damaging than his much publicized timidity and lack of aggression. Possessions are offensive currency, and this kind of turnover rate, if it sustains, is death for any ambition of primary or even secondary ball handling duties for the sophomore Ntilikina.

There are mitigating factors dragging this number down. Jeff Hornacek’s offense last year, 20th in offensive rating, wasn’t the easiest environment for a 19-year-old Frank to thrive. It’s worth noting that most of Ntilikina’s minutes and reps as a playmaker came after KP’s injury, when the Knicks offense really cratered. Regardless, he struggled mightily taking care of the rock and will need to be more judicious going forward.

Part of his struggles were skill-based, like a shaky handle that he’s worked on and improved this offseason. Part of his struggles were mental, like unsurprising poor decision making by a rookie with his first taste of NBA defenses. And at least part of his struggles can be reasonably attributed to the combined pressure of persistent and loud calls for offensive aggression, in inconsistent and often scarce minutes. Tell a 19-year-old rookie with naturally tentative tendencies to be aggressive in sporadic minutes on a bad team, and you will, predictably, get turnovers.

All this negative context—aside from talent—will be vastly improved this season with Fizdale in the driver’s seat, and it will be interesting to see if, and by how much, Ntilikina’s turnover percentage improves as well.

The ability to consistently create his own shot may be beyond the scope of realistic sophomore season expectations for Frank. Taking the open jumper with confidence and attacking closeouts is offensive growth enough for a naturally pass first, second and third guy like Ntilikina. But he may show flashes of creation, which would be huge given how offensively anaemic he was last season.

Frank didn’t finish it off, but at least he’s driving and shooting the ball. pic.twitter.com/cAoss6Vy3t

Taking these three areas of improvement as incremental building blocks, shot creation would be the icing on the cake of a best case scenario development curve for the Frenchman.

Not everyone has iso-genetics. Some, like Allonzo Trier, get more than their fair share, while others get less. It’s more a difference of disposition than anything else. Trier stalks buckets like he needs them on the court, whereas Frank’s got a more “let them come to me” type of approach.

Of course, the ability to create your own shot is incredibly valuable, especially in a progressively more switch-happy NBA. A Frank who can attack switches is Knicks daydream territory. It’s third on the offensive improvement priority list. Steady progression in his shooting, and looking after that basketball should be the real goals of this season. The rest—little glimpses of a post game or occasional one-dribble pull-up isolations—is a bonus.

So let’s agree to abandon the point guard debate. A successful sophomore season for Frank is not defined by position. It’s defined by the skills he develops to complement his defensive foundation. If we get to next spring and Frank’s shooting 35-plus-percent from deep, with a turnover percentage in the low instead of high teens, who cares what position he plays?