Three Takeaways From a Knicks Season Mired in Losing 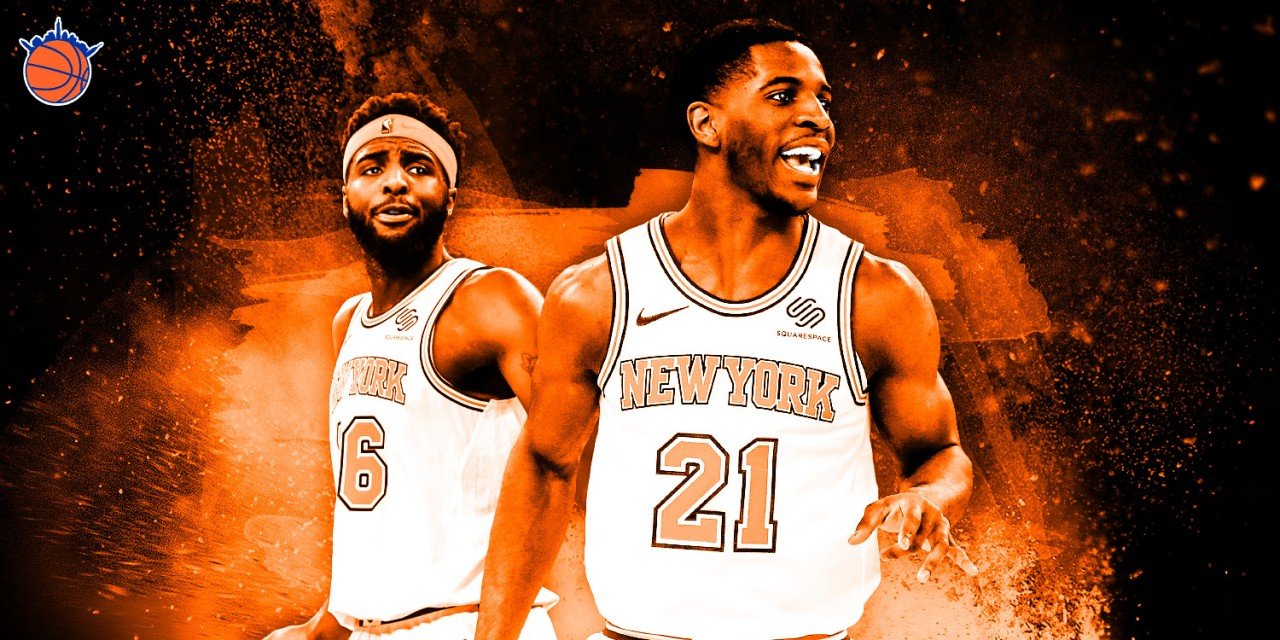 The Knicks will finish this season with 50-plus losses for the fourth straight year, but on a positive note, here are three reasons the season wasn’t totally lost.

As the season comes to a close with only 10 games remaining, Knicks fans are forced, once again, to read between the lines of another losing season.

The New York Knicks now have four consecutive 50-loss seasons, but this year felt different from years past. A combination of a seemingly competent front office and a coaching staff built for and focused on player development has shown significant return on investment despite an NBA-worst 14 wins.

One thing was clear entering the season: losing meant winning and winning meant losing. The hope for the Knicks remains a lowly 14 percent chance at the number-one overall pick in the 2019 draft, and the dream that Duke’s Zion Williamson will have “New York” stitched across his chest next season.

Yet even in a 14-win season with the ‘Bockers missing the playoffs for the sixth consecutive year, there are aspects this team that can be seen in a positive light.

The Kristaps Porzingis trade was over a month ago; it’s time to move on. The identity of this team now rests in the hands of David Fizdale and several scrappy, lesser-known prospects.

The most redeeming aspect of this Knicks team is that they boast the youngest roster in the NBA. Success is not in their win-loss record, as it would be traditionally, but in how the players are developed. How each player has grown from the beginning of the season to the end will be the best measuring stick for this year’s campaign.

New York currently owns the 28th and 30th ranked defensive and offensive team ratings, respectively. They, on average, score just 105.3 points per game, 28th in the league, while giving up 114.3 points to their opponents. The takeaway from this emotional roller coaster of a season won’t be team stats, unfortunately.

Coach Fizdale has started 18 different players over the course of 72 games. Each player on the roster has received considerable playing time, but the majority may not even be on the roster come next season. No player has been close to perfect, but there are three reasons to believe that this season isn’t lost.

From the strongest and most encouraging play to the shakiest, here’s why you’re allowed to be cautiously optimistic with this Knicks team.

After a 44-game rookie campaign in which he started just two games and spent time in the G League, Damyean Dotson has established himself as an NBA player in just his second season. Without going too much into the past, Dot received only 10.8 minutes per game in the Jeff Hornacek era but has been unleashed by Fizdale.

In his last 10 games, Dotson has been averaging 17 points, 4.5 rebounds, 2.6 assists, and 0.9 steals while playing 33.4 minutes per game (per NBA Stats. On 44.1 percent and 40 percent shooting from the field and beyond the arc, Dotson is now leading the Knicks team in scoring and has shown the shooter’s mentality to uplift his team.

Dot nails his third triple of the night pic.twitter.com/4VFro671Dr

What makes him so valuable is that he is a two-dimensional player who oozes effort on both ends of the floor. The tenacity to leap up above everyone else to snatch rebounds with one hand, run down the court, and make the right outlet pass is the kind of play that a coach can only dream of. This is common for Dot.

With physical defense, one could expect him to foul frequently. Except he doesn’t. Averaging just 1.9 fouls on the season, Dotson is a strong defender who also is able to stay on the floor for long periods of time. Although New York is the worst defensive team in NBA, it’s not just his fault. Rarely out of rotation or the factor in a defensive breakdown, Dotson is a sound player and can make an impact on any winning team.

While the team hasn’t been matching his level of play, the wing Dotson will close out the season on a high note and has been given the green light by Coach Fizdale.

Mitchell Robinson could be an unstoppable force down low

Mitchell Robinson was supposed to spend time in the G League this season, per Coach Fizdale.

Measuring in at 7’1” tall with a 7’4” wingspan, a 9’3” standing reach, and a lean 240 pounds, Robinson has all the physical tools to become an elite modern defensive center.

Insanely quick to get out to the perimeter, Robinson uses his length to block shots he has no business contesting. Already a nightmare for opposing offenses, Robinson is tied for second in the NBA in blocks per game with 2.4, only behind Myles Turner and neck to neck with Anthony Davis.

The stats speak for themselves. Just 20 years of age, Robinson has broken Knicks rookie records, like Porzingis’ rookie block record at 136, and broke Patrick Ewing’s record for most consecutive games with a block last night against the Jazz. These are real box scores below:

Under Fizdale, Robinson receives just 19 minutes per game despite looking like the center of the future. Despite monster stat lines, Robinson is quick to rack up fouls, averaging 3.3 a game, and isn’t as strong of a defensive rebounder as new Knick DeAndre Jordan.

Having already played over 1,000 minutes in his rookie campaign, Robinson’s per-36 numbers suggest that he’s already a force to be reckoned with—12.5 points, 10.6 rebounds, and 4.6 blocks on 68.1 percent shooting from the field. More importantly, his stats translate to better team play; the Knicks are 4.1 points better per 100 possessions when he’s on the court.

A scouting report prior to the draft suggests that Robinson has the potential to be the best defender of the draft. Per The Stepien: “[Robinson] was the best rim protector on that [EYBL] circuit and looked to have as much or more defensive upside than Mo Bamba, Jaren Jackson, Wendell Carter.”

Regardless of his draft position, Robinson has signed a four-year contract with the New York Knicks. Next season he’ll most certainly come back with more weight, more strength, and better footwork.

He has blocked a Luka Doncic step-back three, a James Harden step-back three, and a Dwyane Wade fadeaway. Following a stellar season, the question now becomes: Is Mitchell Robinson the Knicks’ best and most promising prospect?

Allonzo Brian Trier has been a baller his entire life.

Trier is a former McDonald’s All-American, the Jordan Brand Classic MVP, and five-star recruit who went undrafted due to character concerns regarding a failed performance-enhancing drug test in college.

You know the rest of the story. Trier went undrafted and now is a star in the making for the New York Knicks. Coach Fizdale raved about Trier at the beginning of the season, saying that the young guard reminds him of a Lou Williams-type player—meaning he can flat-out score the ball.

In a seven-game stretch between February 26th and March 10th, Trier averaged 17.4 points, 3.9 rebounds, and 1.6 assists in 27 minutes per game while hitting 49.3 percent of his shots from the field and an insane 56 percent of his attempts from deep.

There are multiple reasons to be excited about Trier’s play, but what has been most encouraging is his consistency since the All-Star break. Prior to the break, Trier had his up-and-down games that one could expect. Since then, however, he has only been getting better.

The Arizona product is only behind Trae Young, Luka Doncic, Collin Sexton—all top draft picks—and Jalen Brunson—the 2018 college basketball Player of the Year—in total points scored by rookie guards post All-Star break, while averaging 14.5 points per game on 45.2 percent shooting from the field and 40.5 percent from deep. What’s most impressive, and in some ways not conducive to team play, is that 65.1 percent of his made field goals on the season are coming unassisted. In other words, he’s very good at scoring on his own.

Despite concerns regarding his defense and tendency for shooting long mid-range twos, the coaching staff has been feeding Trier minutes at multiple positions—the 1, 2, and 3. In 1,459 minutes played this season, 73 percent of his playing time is at the shooting guard position, 17 percent at small forward, and 10 percent at point guard. This is the kind of flexibility that Fizdale was implying when talking about position-less basketball.

The takeaway from this season is that Fizdale and the Knicks now have a bona fide scorer in Allonzo Trier; someone whom they can rely on going forward who is also under contract for next season. From a two-way contract to now an all-but-guaranteed NBA player, Trier is certainly a reason why this isn’t a lost season.

Reading between the lines isn’t fun because it means that, in a macro sense, the team is losing.

Between Damyean Dotson, Mitchell Robinson, and Allonzo Trier, three players have emerged from this year as winners. As the final 10 games come and go, this season isn’t completely a wash. Knicks fans can confidently say there’s reason to be optimistic about next year.

»READ: The Knicks’ bench is outworking the starters—and that’s O.K.