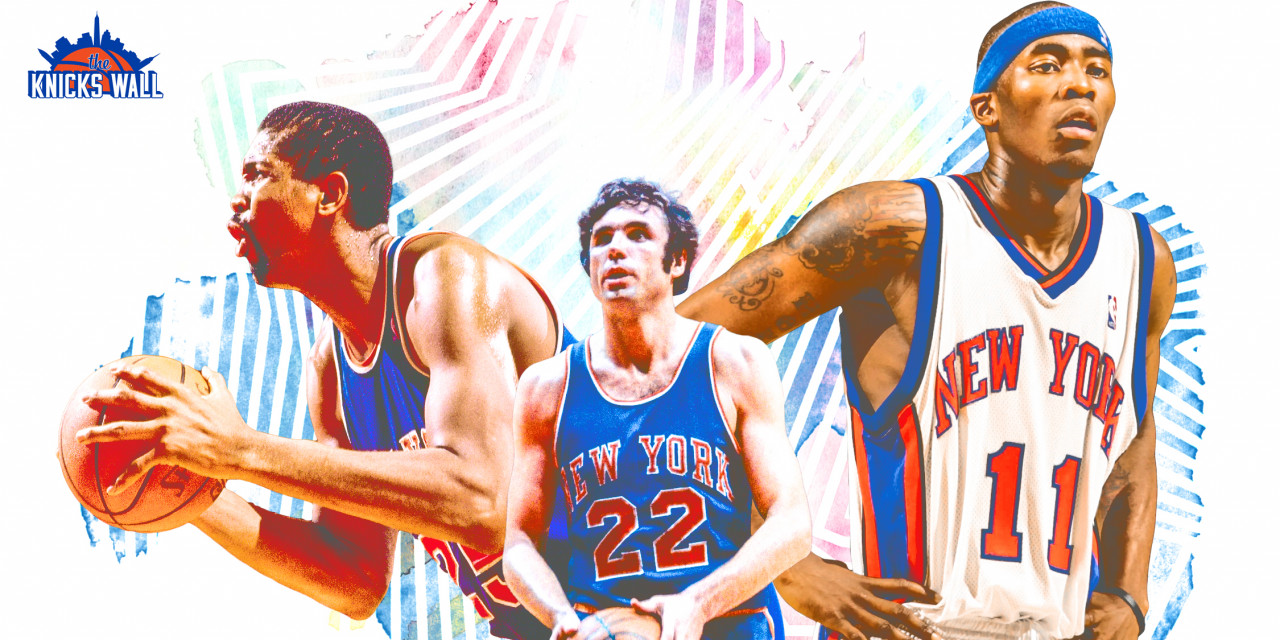 Between the legends and the flops of Knicks history, several players stand out as severely under-appreciated for what they did for the franchise and what they brought to the Garden.

Like most long-standing NBA franchises, the New York Knicks have seen a number of stars come and go since their inception. Some are beloved, others not so much. Factors such as individual statistics, playstyle, and team success all work to (usually fairly) define a player’s reputation. However, there will always be players who are undeservedly overlooked, and the New York Knicks have employed a few names who fall under this category.

None of the Knick standouts to be mentioned were superstars or anything close to them. But what they do have in common is that they had stretches of greatness that are seemingly lost to time. Let’s break down three former New York Knicks who are worth being reminded about.

The 2000s were the dark ages of the Knicks franchise. New York mustered a winning record for just one season (2001) over this span and struggled to adapt without their longtime man in the middle, Patrick Ewing. As the losses piled up, so did coaching changes; seven different coaches held the reigns in just 10 years. It was a period in New York history defined by dysfunction both on and off the court. Despite all that went wrong for the Knicks in the early 20th century, there were a few bright spots scattered across the decade. One of the most overlooked of them all was Jamal Crawford, a dynamic, score-first wing.

Crawford’s tenure in New York spanned four-plus seasons and a total of 299 games. He was traded from the Chicago Bulls to the Knicks shortly before the 2004–05 season in exchange for a lackluster trade package highlighted by an aging Dikembe Mutombo. This deal went down in history as one of the few trades of the early 2000s that New York decisively won. Why exactly? Simply put, Crawford never finished worse than second on the team in scoring in his time with the Knicks.

Crawford averaged 17.6 points per game for his Knicks career, the 18th-highest scoring average in franchise history and ahead of names like Amar’e Stoudemire, Earl Monroe, and Dave DeBusschere (who we’ll learn more about later). And the notion that Crawford was nothing more than some inefficient, shot-chucking ball-hog is flat out misguided. Crawford fell in the top 50th percentile in effective field-goal percentage for three out of his four full seasons in the Big Apple, per Cleaning the Glass. Not to mention he was remarkably accurate from the mid-range game, having finished no worse than the 65th percentile in mid-range proficiency in any one season as a Knick.

Although Crawford is (rightfully) remembered foremost as a perimeter scorer, he was one of the better passing wings in the entire league during his heyday. Believe it or not, Crawford had more seasons where he led the Knicks in assists than points (two compared to one). The year 2007–08 was the best stretch of facilitating in his entire career, as he dished out a team-best five dimes per game. Crawford was one of only 21 combo guards in the league to post an assist percentage of 21.6% or better that season; other club members included Steve Francis, Dwyane Wade, Gilbert Arenas, and Allen Iverson.

In a time where ambiguity clouded the Knicks, Crawford was a ray of consistency. Regardless of what New York’s rosters looked like from 2004–08, fans could rely on Crawford to score points and set up his teammates with style. His show-stopping ability to create off the dribble for himself and others at his size made the Knicks worth watching. He deserves more recognition for all of the offensive masterclasses he accumulated over the seasons, even if they didn’t amount to much on-paper success.

Only two Knicks in franchise history have made the all-star team every full season they were in the Big Apple. Carmelo Anthony is one of them (no surprise there). What about the second? It’s Dave DeBusschere, whose contributions were invaluable towards bringing New York their only two titles back in 1970 and 1974.

DeBusschere is far from the sexiest name on those title-winning teams. The backcourt of Walt “Clyde” Frazier and Earl Monroe are the two most remembered stars of the Knicks’ dynasty; they were each good for 20-plus points and four-plus assists per game throughout the early-to-mid ’70s. But make no mistake, a big three spearheaded the winningest stretch in Knicks history: DeBusschere was the third musketeer, the Chris Bosh to New York’s LeBron James and Dwyane Wade. And like Bosh, his production was often overlooked playing alongside flashy, score-heavy stars.

One cannot discuss DeBusschere without acknowledging his innate ability to pull down rebounds at 6’6″. It’s not hyperbole to say he’s the greatest board-snatcher to ever don the orange and blue. DeBusschere ranks sixth in franchise history in total rebounds (4,671) despite playing far and away the fewest games of any ‘Bocker in the top 10 at 435 appearances. Plus, his Knick average of 10.74 boards per game is higher than New York’s all-time leading rebounder, Ewing. DeBusschere never averaged fewer than 10 with New York and was arguably the league’s best at pulling down misses for his size.

Few players are deserving of the title of Swiss army knife. But DeBusschere is a rare exception; his offensive repertoire was multifaceted and ahead of its time. Firstly, he was an inside-out scorer, a player archetype rarely seen in power forwards in the ’70s. The righty had a sweet-shooting jumper and a career free-throw percentage of 70.0%. Not to mention he possessed a rock-solid handle and adept quickness, both of which allowed him to get into the teeth of the defense and finish at the rim/draw fouls (3.5 free throws per game with New York). And having averaged 3.0 assists with the Knicks, DeBusschere was a reliable secondary creator who frequently took the ball up the court and initiated the offense.

All in all, there weren’t a whole lot of flaws in DeBusschere’s game, if any. Unfortunately, statisticians did not record blocks and steals for the lion’s share of his career. Still, the eye test shows DeBusschere was a multi-positional defender who often took on the most challenging defensive assignments. There exists tape of him checking legends from Wes Unseld to Elgin Baylor. He was an active defender who had the strength to bully with bigs and the shiftiness to stick with wings. DeBusschere stands out as one of the first All-Star-level glue guys in NBA history. He did just about everything on the basketball floor to help the Knicks win. New York wouldn’t be sitting with a pair of chips if not for DeBusschere’s two-way impact. Rest in peace, legend.

When NBA fans hear Bill Cartwright’s name, they’re likely to think of the Chicago Bulls Cartwright, who was in his 30s and declining. Unbeknownst to some, Cartwright spent his prime years in New York.

Upon being drafted third overall in the 1979 draft to a 31-win Knicks team, Cartwright had lofty expectations to step in and resurrect the franchise. He more than lived up to the hype as a rookie, averaging 21.7 points, 8.9 rebounds, two assists, and one block on 54.7% shooting from the field. He even earned an All-Star selection (the only one of his career) and would have probably won Rookie of the Year if not for a youngster in Boston by the name of Larry Bird.

Cartwright was a dominant post scorer in his early years with the Knicks. His shot of choice was the turnaround low-post jumper, as he could get it off against practically anyone at 7’1″ and 240 pounds. Cartwright was also a dead-eye mid-range sniper and an ambidextrous finisher inside who showed off his feathery touch with push shots and tip-ins.

Though he couldn’t replicate his rookie year production, the first five seasons of Cartwright’s career went as swimmingly as anyone could’ve hoped. He never suited up for less than 72 games in a season and averaged 17.9 points and 7.4 rebounds from 1980–84. Cartwright finished among the team leaders in points and rebounds every year, but his impact went beyond the numbers: the Knicks were winning again. As perhaps New York’s top all-around player, he led the team to three playoff berths and back-to-back appearances in the second round.

However, as Cartwright was tearing up opposing bigs throughout his 20s, it was beginning to take a toll on his body, specifically his left foot. Foot injuries have come back to bite big men countless times throughout the history of the NBA (more recently Yao Ming), and Cartwright is one of the earliest examples. Before the 1984–85 season, an examination revealed Cartwright fractured his left foot and would have to sit out the entire 82-game campaign. Fast forward to the 1985–86 year, and the injury reared its ugly head once again. Cartwright re-fractured the same foot during a preseason contest and suited up just twice in 1985–86.

Thanks to Cartwright’s injury woes, the Knicks sank back to the bottom of the standings. A 23-win season in 1985–86 and some ping pong luck secured New York the draft rights to Patrick Ewing, and from there, Cartwright’s fate was set in stone: he would not remain a Knick long-term with a Hall of Fame center ahead in the depth chart. After two more middling seasons in New York, he was dealt to the Chicago Bulls in June 1988 for Charles Oakley.

Cartwright’s Knicks career is a unique “what if” story. He had the skills to be one of the best centers in the league throughout the ’80s and ’90s, but unfortunately, his body gave out. Nonetheless, Cartwright’s first five seasons are worth celebrating, and his rookie campaign might be the best of any Knick ever.