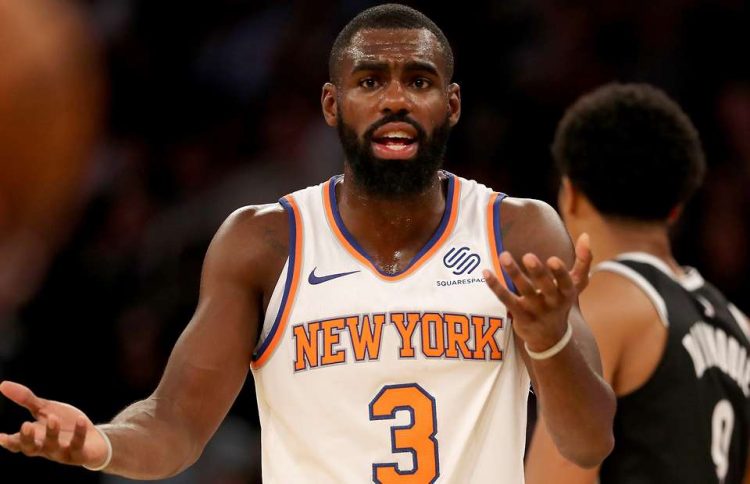 The Knicks will be without their starting shooting guard for at least two weeks following a lower body injury.

The injury bug comes from every team in the league. Today, it has decided to bite the Knicks pretty hard. Tim Hardaway Jr., who was in the midst of enjoying his reunion with the team, is scheduled to miss at bare minumum the next two weeks with a stress injury in his lower left leg:

Knicks say Tim Hardaway Jr. will be out for at least two weeks due to the stress injury in his lower left leg. https://t.co/wWTpam8Epo

This comes a day after Marc Berman of the New York Post mentioned that Hardaway Jr. could miss up to two months if the injury is a stress fracture. The obvious play for the Knicks is to give their 71 million dollar man as much time as he needs to get back to full health. If that patience results in missing the rest of the season, so be it. Let’s hope it doesn’t come to that.

Where does this injury leave the Knicks? Without Hardaway Jr., they lose their second best scorer, and take a hit at a position they were already paper-thin at. Jeff Hornacek has a few options he can work with on the bench, and the Westchester Knicks could have some pieces to help too.

The logical plan would be to bump Courtney Lee down to his natural position at the two. Lee has been defending the opposing team’s best scoring option already, so the defensive assignments should not change much. The area Timmy’s absence will be felt most is on offense. In the two games without him (and Kristaps Porzingis) in the lineup, the Knicks packed the punch of a teddy bear offensively.

Timmy is on pace to average a career-high in points (17.8) and had been doing it with a variety of scoring. He was not just hanging out beyond the arc. He was attacking the basket and getting to the line. Without him, the focus of the offense will be doubled down on Porzingis. Teams have already been swarming KP with multiple defenders, and that will only worsen with Hardaway Jr. on the shelf.

Hornacek has a few options to attempt to replace THJ. The first is what he has done the past few games, which is to start rookie Damyean Dotson. The rookie has taken after his draft classmate Frank Ntilikina on the defensive end:

On offense, it has been a mixed bag. His game is a little reminiscent of the Timmy the Knicks had prior to trading him to the Hawks. On Monday night against the Pacers, he started to shoot more (3-of-8 from the field for nine points), but that was likely due to the game being out of hand early. If he is going to remain a starter, his aggressiveness on offense will have to pick up. Porzingis will be looking to pass out of the double and Dotson has shown he can knock down shots from the perimeter.

That is where another name comes to mind. Doug McDermott has been a fan favorite amongst Knicks fans, and for good reason. He’s in constant motion on the floor and provides the starting lineup with a drive-and-kick sniper. He is shooting 40.3 percent from deep this season, which makes him an ideal person for Porzingis to look to when an extra defender heads his way. It also allows Lee to return to his true home at the two.

The one negative is that taking McDermott away from the bench weakens the second unit. This is where Michael Beasley can step up. If McDermott were to slide in with the starters, that would leave Kyle O’Quinn and Dotson as the best scorers. Beasley will have ample shot attempts at his disposal. If Hornacek can tame Beasley to shoot within the offense, then the Knicks can survive Timmy’s absence.

No matter how you slice it, Hornacek and the Knicks have some tough decisions ahead. It’s easy to say the tank is back on but this team has shown enough talent to make a playoff push. A trade may be on the horizon. Until then, Hornacek and company will have to piece together a gaping hole left on their roster.