For the Knicks, Time Is Quickly Expiring for a Playoff Push

New York is down to its last thread of hope to make a push for the playoffs, but this mediocre team may not be bad enough to vie with the worst teams in the league for the best position in the lottery.

A brutal loss to the Memphis Grizzlies in which a combination of poor lineup choices, disinterested defense, and questionable officiating at the end of the game led to a painful defeat for the Knicks. The loss dropped the Knicks to 20–25, and although they still remain just three games out of a playoff slot, it might as well be 50—because that’s sure as hell what it feels like. The chasm between the Knicks and a playoff slot grows wider every day, both in the minds of the fanbase and in the standings. Whether you’d prefer to blame Jeff Hornacek’s coaching, Kristaps Porzingis’ struggles, injuries, or any issue in between, the fact remains that the playoffs are no longer the most viable road for the 2017–18 Knicks. Plenty of parties deserve blame, but let’s save the finger-pointing for a different conversation at a different time. That’s not pertinent to today’s discussion.

The schedule has been brutal, with January potentially serving as the fatal blow to the season. We warned about this back in November when the Knicks were off to a nice 8–6 start. Those were the days. With 37 games remaining, 20 will come on the road, with six out of seven this month away from MSG. The schedule normalizes a bit after January passes, with 16 home games and 14 road games from February until April. There are plenty of winnable games on the schedule, with home affairs against Atlanta and Orlando in addition to road games in Orlando and Sacramento on the docket. The season certainly isn’t over. There’s still time for the Knicks to turn this around, to right the ship and reacquire some of that November magic that made this team so fun for a brief period of time.

Should we root for that, though? This is always the most difficult time of year for fans of teams that are in a position similar to that of New York. They aren’t quite bad enough to tank completely, but they aren’t quite good enough to secure a playoff spot that could provide any sort of hope in a series. This was the worry of many around the NBA when the Knicks hopped out to their decent start, and those premonitions have now become the reality.

So, what now? Do we root for the Knicks to win and end up missing out on the playoffs by the skin of their teeth? Or do we hope they lose games so that they can lock down a great chance at obtaining an elite talent in the draft? I say root for whatever you want because it’s still relatively early to let the bottom fall out.

Here’s the issue: it’s going to be incredibly difficult for the Knicks to perform badly enough to drop below the tankerrific teams of this NBA season. Take a look at the bottom of the standings right now: 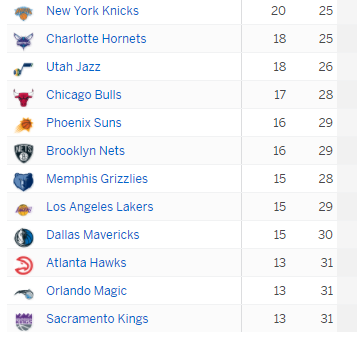 The Kings, Magic, and Hawks are going to be at the very bottom. They are openly tanking and, well, they’re bad at basketball. The Mavericks, Lakers, and Grizzlies will all be tough to out-suck for a myriad of reasons. The Grizzlies are injured, the Lakers are young, and the Mavericks have noted net-minus Dennis Smith Jr. on their team. Hey, c’mon, I kid, but the numbers don’t lie. Let me squat on my Dennis Smith Jr. takes without any repercussions.

The Nets, Suns, Bulls, Jazz, and Hornets could all end up better than the Knicks, though it’s unlikely. Even if the Knicks drop below this tier of teams that falls directly below them, they still would only have the seventh-worst record in the league, better known as exactly where they ended up last year. What seems like the most likely result?

Over the last ten years, the average number of wins per draft lottery position is as follows: 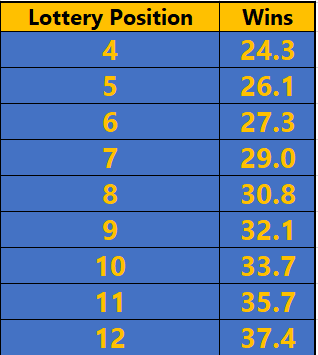 My fantastic artwork notwithstanding, it feels safe to rule out the 4-6 positions, as mentioned above. Every year is different, but the Knicks in all likelihood would have to go between 4–33 and 7–30 to nab those spots. Barring an injury to Kristaps Porzingis (knock on wood) and potentially another piece, that’s not happening. For the Knicks to drop into the 7-9 lottery range they would have to go between 10–27 or 12–25. A little more realistic, considering that the Knicks have lost 11 of their last 14 contests.

I’d still place my money on the Knicks finishing in the 10-12 range. This feels like a 33–35 win team at the current pace. Finishing the season with a 14–23 record makes sense in my hopeful, yet somehow also pessimistic brain. There are some ghastly teams below them that go into every game with such a stark disadvantage at every facet of basketball that winning a game against even an average team is an anomaly. Looking ahead, the Knicks are in the top third percentile in terms of how difficult their schedule is, facing teams that have a combined 51.5 winning percentage. That includes:

Even if we’re generous and say the Knicks manage to win four of those games, that puts seven more losses on the board. The ceiling is quickly dropping for the amount of games this team can win, and they’ve successfully painted themselves into a corner between being atrocious and being a sliver below mediocre.

All of this is to say that the Knicks are in the dreaded area that results in a complete lack of clarity for what the rooting interest of the fanbase should be. After a win, excitement still seeps into the brains of Knicks fans that the playoffs are still just a win streak away. After a loss, tanking is the talk of the town. The latter has been the predominant feeling lately, with thoughts of sugar-plum Doncic’s and Bagley’s dotting the dreams of many across the Empire State. There’s a ton of alluring talent that will be entering the Association come May, but the Knicks may just miss out on the cream of the crop. Time will tell.

For now, all we can do is take it one game at a time. The playoffs seem like a mirage, but it’s not impossible. We probably shouldn’t be rooting for that, but the Knicks aren’t far enough out of it where every loss feels like another raffle ticket for Doncic in Scott Perry’s pocket. The Knicks will likely lose at least five of their seven games remaining in January, at which point we’ll be firmly in tank territory. Until then, watch the games and do what we always do: hope for the worst, prepare for the unfathomably awful.

What Should We Expect From a Tom Thibodeau Knicks Defense?

The Undrafted Story: Getting to Know Myles Powell