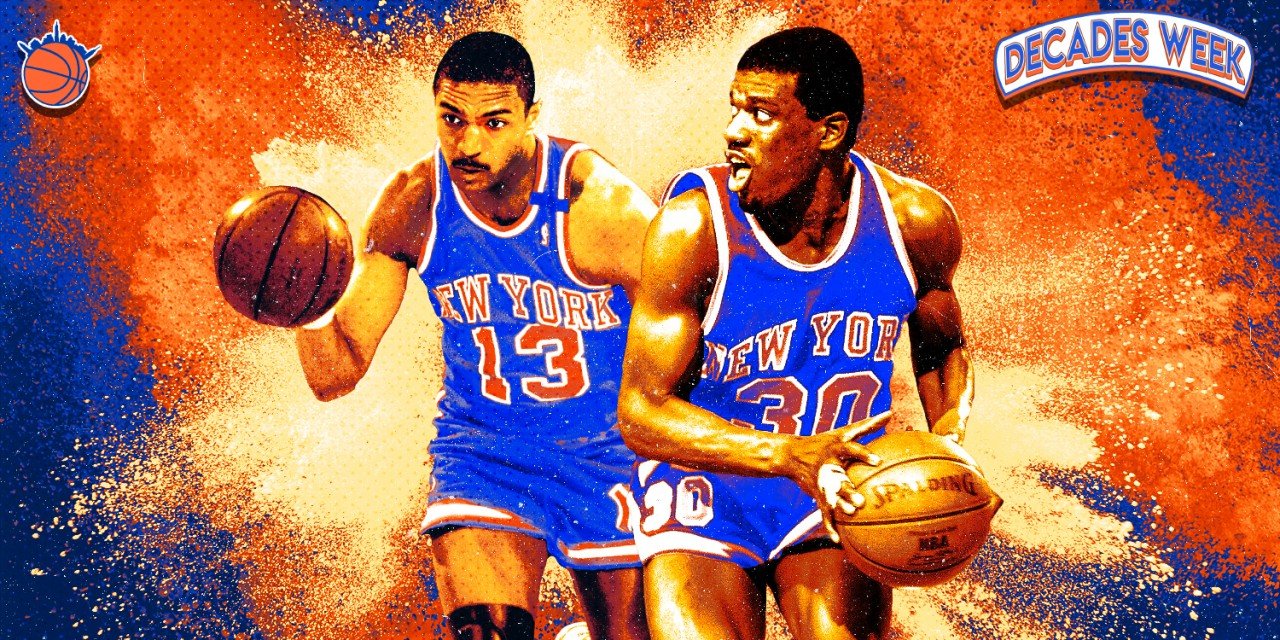 The 1980’s featured an up-and-down era for the Knicks, seeing high-profile head coaches come and go and a start to the Patrick Ewing dynasty.

This week at The Knicks Wall, we’re celebrating Decades Week. Using our latest app, the All-Time Team Creator, plus our own knowledge of the past, we’re creating the best, brashest, and most celebrated lineups with players of bygone eras. Play along and read what made the last 50 years of the Knicks tick.

The 1980’s was an up-and-down decade for the Knicks. As the NBA transitioned out of the dark ages of the late ‘70s and blossomed with Showtime, Bird, and Mike, the Knicks (eventually) shifted their fortunes too—with an assist from an allegedly cold envelope—though it would take until the end of the decade for the benefits to reap.

The Knicks spent the Eighties mostly out of serious contention under a cycle of notable coaches. After winning 39 games in 1979–80, the team won 50 the following season still under Red Holzman, only to regress to 33 in ’82. Fred VanVleet Finals MVP voter Hubie Brown led the team to consecutive second-round exits before two lottery appearances. Rick Pitino walked through that door and improved the squad, culminating in a 52-win campaign (and another second-round exit) in 1989.

The Knicks had their share of talented players during the decade, but too many had relatively short-lived tenures in New York. With that said, here’s my 1980’s Knicks All-Decade team based on performance during the decade—almost adhering to The Knicks Wall-imposed budget—and organized by “traditional” positions. (Disclosure: my spacing is trash, but my defense is impenetrable.)

The most significant event of the 1980’s for the franchise was undoubtedly the infamous 1985 draft lottery, which netted the Knicks the three-time All-American Georgetown center—who was, by today’s norms, incomprehensibly ready to immediately tear up the league:

After making the All-Star team in his rookie season while posting 20 and nine, Ewing started at power forward (a different time) for his sophomore season alongside Bill Cartwright. He began a run of 10 straight All-Star appearances in 1988, solidifying himself as the Knicks’ franchise guy, before exploding for 28.6 points and 10.9 rebounds averages in ‘89–’90. In total, he averaged 21.1 points, 8.8 rebounds and 2.7 blocks per game over his first four seasons, and pioneered the most sustained run of competitiveness at the Garden in decades.

Sort of cheating here by putting Cartwright at the 4, but he started alongside Ewing during their best season of the ‘80s. Either way, his inclusion here is unavoidable. Cartwright spent his first nine NBA years in New York, including 21.7 points and 8.9 rebounds per game as a rookie (and averaging 20.1 points the next year). His scoring dropped as the team acquired better talent and a foot injury cost him most of ’85 and ’86, but he was an effective big when on the Garden court. From 1979–88, Cartwright averaged 16.8 points and 7.1 rebounds, and ranks second all-time on the franchise blocks list.

King’s Knicks career was short-lived (138 games total) due to injuries and substance abuse issues, but his run in New York is the defining stretch of his Hall of Fame career. He was simply one of the smoothest dudes to grace the hardwood—the cliché about the “lost art of the midrange” is essentially a reference to games like King’s.

His career scoring average (26.5) is the second-highest in Knicks history, and his back-to-back 50-point games in 1984 (on combined 40-51 shooting) is the franchise’s most memorable non-lottery moment of the era. He was awesome in the ’84 playoffs, dropping 42.6 points per game in the first round vs. the Isiah Thomas Pistons. He won the scoring title the following season (32.9 points per game), highlighted by 60 on Christmas vs. the Nets.

Wilkins was the mainstay starting two for the Knicks from 1986–92, and frequently their second leading scorer after Ewing. A traditional throwback winger, he had up-and-down shooting numbers, but still got steady buckets. Wilkins’ (Dominique’s bro) peak years came early on (before the arrival of John Starks), including 19.1 points per game in 1986–87 (35% from downtown) and 17.4 points the following season. More importantly, Wilkins was consistently one of the top defensive guards in the game. He also made two completely forgettable appearances in the dunk contest, including some hilarious weak sauce:

I don’t technically have enough funds for Richardson, but I’m willing to pay the tax for his talent. By all accounts, Richardson was one the most purely gifted players of his era—a 6-foot-5 defensive stopper who, in his second season, posted 15.3 points, 6.6 rebounds, and 10.1 assists per game, and led the league in steals. He earned All-Defensive First Team twice in his first three seasons, made the All-Star team from 1980–82, and ranks second on the franchise triple-doubles list (18). Richardson was a Knick only until 1982, but he’s absolutely my hypothetical starting point guard if I need to win one game (even more so than young Mark Jackson).

»READ: What if the Knicks never won the 1985 NBA Draft Lottery?