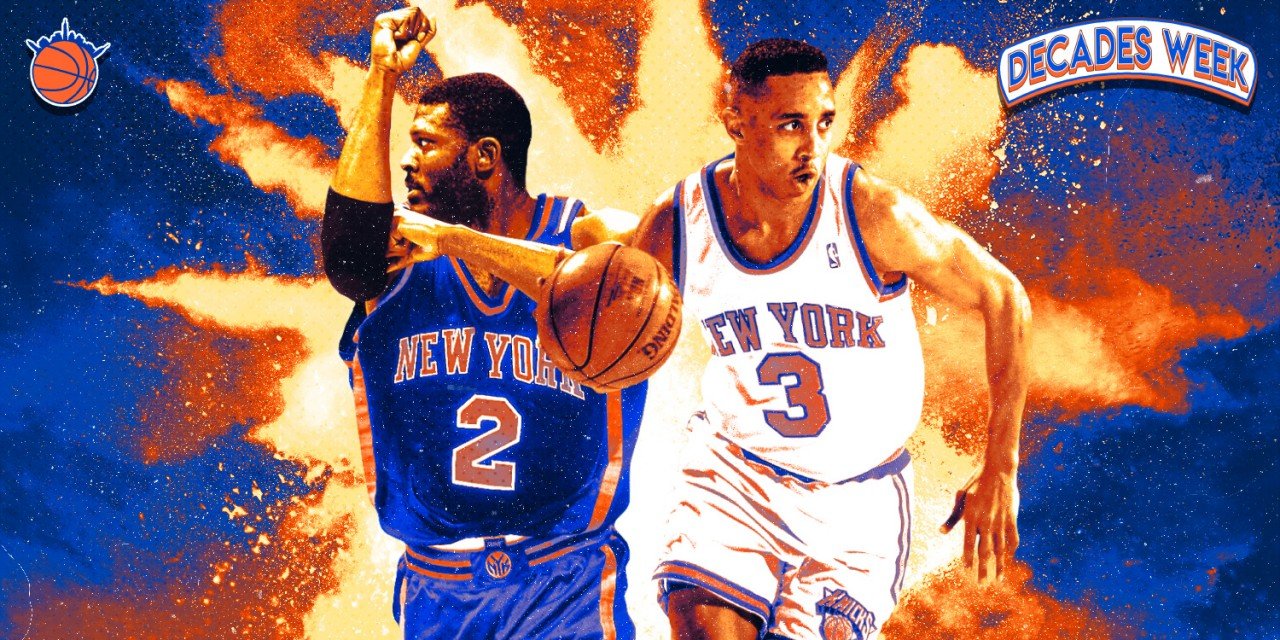 The 1990’s were a glorious time for the Knicks, with tough New York basketball and only a championship ring falling short in the decade.

This week at The Knicks Wall, we’re celebrating Decades Week. Using our latest app, the All-Time Team Creator, plus our own knowledge of the past, we’re creating the best, brashest, and most celebrated lineups with players of bygone eras. Play along and read what made the last 50 years of the Knicks tick.

“It’s good to be in something from the ground floor. I came too late for that and I know,” Tony Soprano once declared. “But lately, I’m getting the feeling that I came in at the end. The best is over.”

In many ways, being a post-90s Knicks fan is a lot like being in the mafia during the early 2000’s—the best is over.

During that time Madison Square Garden actually lived up to its billing as The Mecca. Playoff basketball wasn’t an achievement, it was a formality. The Knicks made the playoffs every year, including two Finals trips. And if Michael Jordan never existed, maybe the Knicks have won a ring or two.

Beyond winning, the team’s city-centric energy is what formed a close bond with the city. The Knicks played like they were from New York. What do I mean? Allow me to show you:

They had an identity, a swagger to them, even a dope hype song.

That feeling left and never really came back. For fans lucky enough to experience this golden era, everything pales in comparison. Hometown stars Carmelo Anthony and Stephon Marbury have tried their best but have fallen flat.

If you are a ‘90s baby like myself, missing out has an extra sting to it. We were so close to watching some good Knicks years. Instead we have resigned to watching the team flounder to reach what feels like an unreachable standard.

Thanks to the modern day Picasso, TKW’s Ryan Gray, we get to relive the last good era of Knicks basketball while we wait for the next one. The ‘90s guys were such a cut above that it was impossible to make an eight-man lineup—so I asked my close personal friend Ryan to make a special exception to create a five-man lineup.

That’s right: I have a limited, ultra rare, 90s edition of the TKW All-Time Team Generator. The only catch is instead of a $200 budget I have $180 to play with, which forced me to make some tough decisions.

Did I hold John Starks’ missed free throws during Game 7 of the ‘94 Finals against him?

Was Charles Smith able to crack consideration after getting adopted by the Bulls? Okay, he is definitely not on this team, and was never considered, but you get the point.

Was there any doubt? Patrick Ewing is the second best Knick of all time, and a legend I do not believe gets nearly as much love from the Knicks as he does from the fans. Ewing saw zero losing seasons during his prime.

He was the unquestioned captain of a perennial contender, and had some low-key badass moments. Most of those moments included the Heat, Bulls, or Pacers. But his 1994 schooling of a young Shaq is an under the radar moment.

Ewing is the last true franchise player the Knicks had, and in many ways he’s an avatar for everything the Knicks have been searching for since he left—stability and success.

Ewing might have been the best player on the Knicks during the ‘90s, but Charles Oakley was the ethos of those Pat Riley bully ball teams.

You have to be a bad dude for Michael Jordan to not just respect you, but to genuinely like you. Oak had that effect on people. Also, anyone who slapped the fire out of Charles Barkley off general principle will forever have a place in my heart.

Similar to Ewing, Oakley joined the Knicks in the ‘80s, but became a key contributor for Pat Riley’s team. Alongside Anthony Mason, Oakley was the embodiment of an enforcer. He would beat you up on the glass, and beat you up period.

The numbers don’t pop off the page when you go back and look at them. But some things are bigger than box scores. Clearly Oak did something right as an integral part of the best decade in Knicks basketball.

Due to budgetary issues—there was no way Ewing and Oakley were not making my team—Anthony Mason had to be kept off the list. I knew I had to make up for it with a worthy replacement, and Larry Johnson fit the bill.

Johnson came to New York after Pat Riley skipped town to build the Heat, and past his prime. His Knick career started out poor, but still, LJ carried a level of grit that will always make MSG his home.

Grandmama stuck around long enough for the miraculous final run with the ’99 team and is responsible for one of the franchise’s historic moments: the four-point play.

Jeff Van Gundy said that is the loudest the Garden has ever been. Toss in the fact it was against that weasel Reggie Miller and the Pacers, and there’s no way I cannot have LJ on my squad.

I caved. It was between John Starks and Latrell Sprewell to be my star guard and it came down to the wire. In the end, Starks’ tenure and accolades—one All-Star appearance, Sixth Man of the Year and an All-Defensive Second Team—as a Knick outweighed Spree.

For as much sorrow as Starks caused my father and plenty other Knicks fans in 1994, he was still a key piece for a majority of his time in New York, which came to an end in 1998. He spent more time with New York than Spree, and had his share of moments.

Starks’ iconic moment came against the GOAT, Michael Jordan, when he dunked in Jordan’s vicinity.

On this team Starks will fill the same spark plug/secondary scoring role he played for Ewing. Let’s just hope the game doesn’t come down to free throws, otherwise I am screwed.

In a budget-less world I rock with Charlie Ward ($22) or Derek Harper ($20). Sadly, such a world does not exist, so a savvy buy was needed—enter Doc Rivers.

Doc spent two and a half seasons in New York, but did start 15 games for the Knicks during the ‘93 playoffs and was a key player to start the 1993–94 season before it being cut short due to a knee injury in December of that season.

Rivers will be the brains of the operation and help space the floor with his shooting and defend at the point. At $12 he is a nice bargain guard who rounds out the team with $1 to spare.

As I said earlier, choosing this team was tough. Aside from the ’70s, a glut of the Knicks’ best players came from the ‘90s so there were tough calls.

Here are the guys who missed the cut:

Not a fan of my team? Make your own using our All-Time Team Generator and see how you stack up.