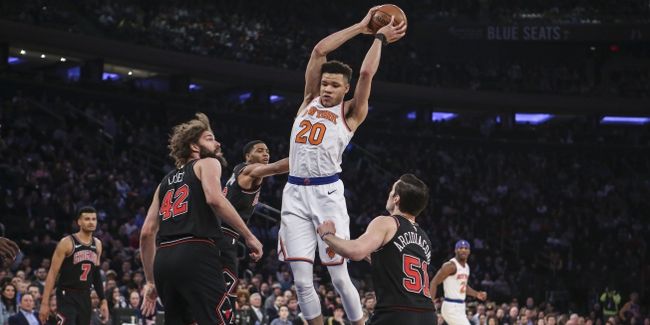 On his 21st birthday, Mitchell Robinson scored 14 points and swatted three shots in the Knicks’ home win over the Chicago Bulls.

The growing phenom Robinson scored 14 points on 4-of-4 shooting, pulled down 10 rebounds, dished out four assists, and blocked three shots in one of his most complete games of the season. Head coach David Fizdale has promised to start the 2018 second-round selection Robinson for the remainder of the season.

Robinson rewarded his coach with a, at times, dominant performance. The Knicks took care of business against a weak Bulls team that made a run in the second half while backup point guard Kadeem Allen (concussion) was sidelined for New York.

Luke Kornet, slotted in at power forward again, scored a career-high 24 points to lead the team in scoring and swatted three blocks next to the intimidating man in the middle in Robinson.

Kevin Knox had a quiet but efficient (for his standards) night versus Chicago. The University of Kentucky product poured in 19 points on 15 shot attempts including a well-meaning four assists—a part of the rookie’s game that has been lacking during his debut season. The ninth overall pick was also one rebound short of fulfilling the double-double requirement.

Elsewhere, Emmanuel Mudiay lifted the Knicks in clutch time again, but the former Nugget had a tough night; he shot 33% and the Knicks were visibly better with Allen on the court prior to the former Arizona Wildcat’s concussion.

And one last note: another happy birthday to Chicago’s Robin Lopez who won’t go unrewarded due to the scourge through which he persevered known as playing all 82 games for the 2015–16 Knicks.