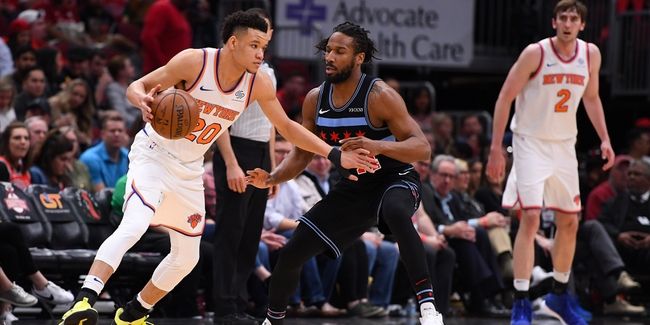 Dennis Smith Jr. and others helped guide the Knicks past the Bulls in New York’s final away game of the season.

The New York Knicks wrapped up their last road game of the 2018–19 season with a win in Chicago, defeating the Bulls 96-86 off the back of an expeditious start by Dennis Smith Jr. and Kevin Knox.

Riding a hot first half, the Knicks mostly glided in the second half but persevered a slim lead to take down the rebuilding Bulls.

Smith Jr. was an integral part of New York’s offense on Tuesday night. Despite nursing a back injury, Smith was called upon to start at point guard again after an illness pulled Mario Hezonja—the Knicks’ relief floor general in the final few games—before the contest commenced. The former Maverick would score 25 points on 10-of-23 shooting while chipping in five assists and fumbling the rock on four occasions.

Kevin Knox once again (we’ve said this a lot recently, huh?) played compelling basketball. The foundation is looking slightly more solid in these final 10 or so games for the Knicks rookie forward. The University of Kentucky product tallied 17 points, including shooting 4-for-8 from three-point range, 10 rebounds, completing the double double, and dishing two assists.

Finally, Luke Kornet started at power forward next to Mitchell Robinson in the frontcourt again. Kornet and Robinson would combine to block nine shots—with Kornet owning the better share for once, six total blocks for the former Vanderbilt center.