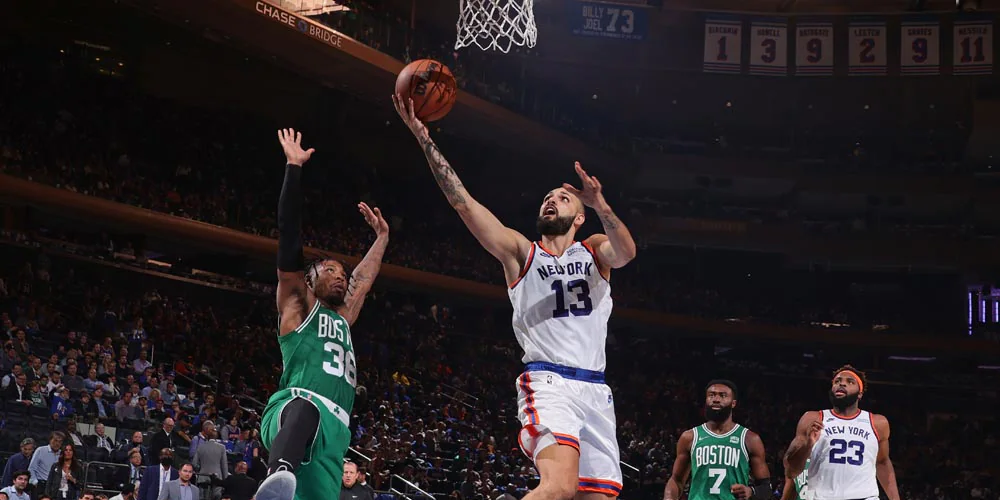 Evan Fournier finished with 32 points and four steals against his former club, the Celtics, in the Knicks’ first win of the season.

The New York Knicks took home their first win of the 2021–22 NBA season last night on their opening matchup with long-time rival Boston Celtics, winning 138-134. It featured the debut of new Knicks guard Evan Fournier battling against his one-time former club in the Celtics.

Fournier impressed on both ends of the floor, finishing with 32 points on 13-of-25 from the field, six rebounds, three assists, four steals, and one block in 44 minutes in the double-overtime victory.

Fournier also splashed home six three-pointers on 13 tries, including a string of treys deep into overtime to keep New York alive. There were some miscues, too, as expected. The former Magic shooting guard also tried doubling or fouling Jayson Tatum, with almost no time remaining at the end of regulation, leaving a man open. This led to Marcus Smart shooting a time-expiring three-pointer to send what should have been a wrapped-up Knicks W in four quarters into overtime.

This is the whole Evan Fournier experience you’re going to get. He has some offensive, shot-making brilliance, even defensive metrics, but several bone-headed plays to keep the other team within reach.

Overall, it was a successful Garden debut for Fournier, however. The crowd became more lively, especially in overtime, as he dumped in three after three, and a win is a win. Julius Randle led the Knicks with 35 points on 27 shots, eight rebounds, and nine assists in 46 minutes. RJ Barrett, quiet in the first half, added 19 points and two blocks along with excellent defense on Celtics All-Star Jayson Tatum, who shot 7-of-30.

Mitchell Robinson, healthy again and starting with Nerlens Noel and Taj Gibson absent, pulled down 17 boards to go along with 11 points on 5-of-5 shooting and a pair of blocks.

The Knicks continue their 2021–22 odyssey in Orlando on Friday (and the Magic again at home on Sunday) as Fournier immediately gets a chance to face his two most recent former clubs.