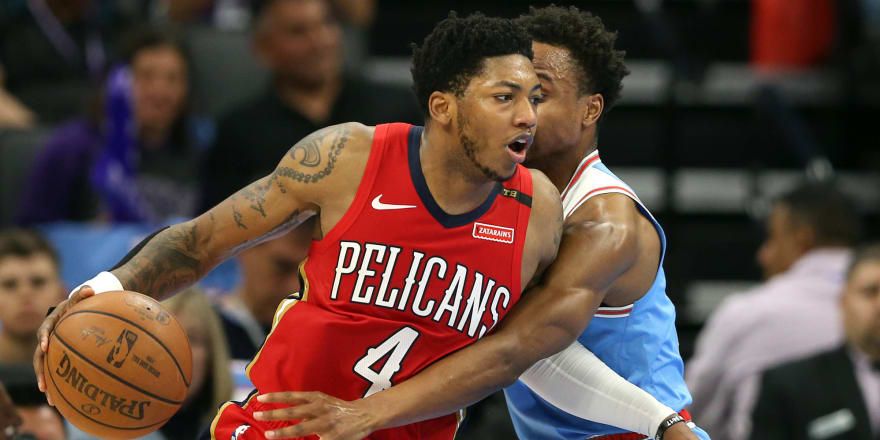 Watch new Knicks and former Pelicans teammates Julius Randle and Elfrid Payton assist each other in a mash-up video.

The New York Knicks contracted seven new players via the NBA’s free agency this offseason, but two of them actually were teammates together with the New Orleans Pelicans last season.

24-year-old power forward Julius Randle spent 802 minutes on the hardwood in a Pelicans uniform with teammate Elfrid Payton. Payton, a 25-year-old former point-guard lottery pick of the Orlando Magic when Knicks general manager Scott Perry worked in the Florida franchise’s front office, signed a two-year contract with the Knicks in the summer with a team option in the second year. New York agreed to a deal with Randle, too—its most lucrative contracted handed out in the offseason at north of $60 million over three years and a team option in the final year as well.

According to two-man lineup data, Randle and Payton posted a -2.1 Net Rating, per NBA Stats, in 38 games along with a 53.9% effective field goal percentage, 57.0% True Shooting percentage, and a 106.31 pace. The Knicks, meanwhile, were a second-worst in the league with a -8.9 NetRtg, last place in eFG% and TS%, and middle of the pack in pace.

The Randle-Payton and Knicks overall pace differential, however, is substantial, with the two former Pels a full six digits faster than New York (+6.15).

Furthermore, the number of passes going to Randle from the floor general Payton was significant. The greatest frequency, at 18.7%, of Payton’s passes went to his new ‘Bockers teammate—five points higher than the next target, All-Star and now-Laker Anthony Davis. Randle shot 46.9% from two-point range in the 10.4 passes per game from Payton and 34% from three.

Randle, meanwhile, made 13.3% of his passes going to his backup point guard’s way (second behind starting guard Jrue Holiday). Payton, a notoriously poor shooter in his five-year NBA career, shot quite well, though, receiving passes from Randle; shooting 48% from two and 42.1% from deep. Payton only hit 43.4% of his field goal attempts last season and a terrible 31.4% from three.

The Payton-Randle match could work well for a Knicks team that needs to kick it into the next gear and run the court with the rim-running duo of Randle and Mitchell Robinson. In the halfcourt, however, Randle is a dynamic post threat while Payton needs to fix his shot to take pressure off his teammates and consistently hit from long range.