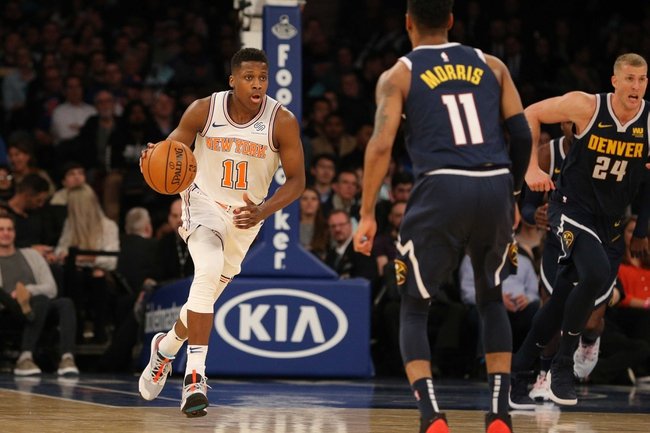 Frank Ntilikina made his long-awaited return back to the hardwood as the Knicks fell to the Nuggets on Friday night.

The New York Knicks lost their third straight game on Friday night in a home defeat to Nikola Jokic and the mighty Denver Nuggets. The biggest story, however, to come out of the Knicks’ loss was the return of Frank Ntilikina who had been sidelined with a nagging groin injury for 24 games—a huge chunk of games to develop and hone the second-year guard’s skills.

Ntilikina played 25 minutes off the bench without discomfort, sharing lead guard duties with Kadeem Allen—back from an injury himself, albeit much shorter than Frank’s ailment—and Emmanuel Mudiay, occasionally sharing the backcourt with the other guards. The Frenchman was in a sharing mood, dishing out a team-high five assists alongside his five points on a paltry 1-of-6 shooting from the field.

Looking at the boxscore numbers, you’ll notice Ntilikina finished with a neutral plus-minus of zero. The only positive Knicks were John Jenkins, Henry Ellenson, and Luke Kornet—bench players who played three minutes of garbage time. Thus, Frank did the least amount of damage to his team’s chances relative to players who found significant time on the court.

Mitchell Robinson, the Knicks’ rookie center out of high school, had another stellar game off the bench. Robinson scored 16 points on 70 percent shooting, 10 rebounds to fulfill the double-double requirement, and three blocks in 23 minutes.

Kevin Knox shot 6-for-16 in the losing effort, producing 19 points, three rebounds, an assist, and one steal in his starting role. The Knicks’ rookie forward is looking to finish his freshman season on a high note after hitting the wall and stalling from January to much of March.

»READ: Parting with Frank Ntilikina might be best for both parties