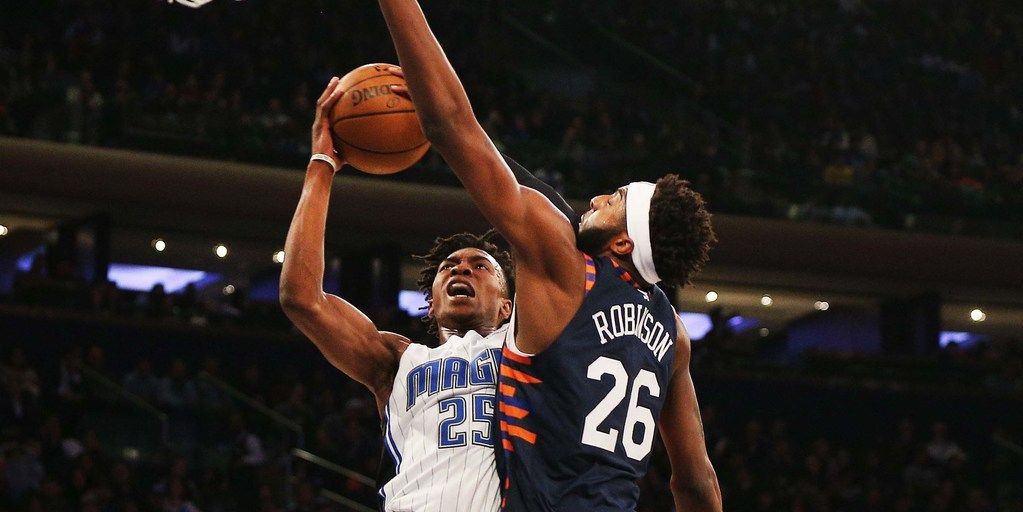 Mitchell Robinson, Henry Ellenson, and the Knicks bench brought the house down in a comeback-fashion home victory over the Magic on Tuesday.

The Knicks’ bench combined to score 75 points and guide the Knicks to back-to-back home wins!

Henry Ellenson played a team-high 36 minutes, scoring 13 points and tallying five assists. The Knicks signed the former Detroit Piston to a 10-day contract last week, hoping the former 18th overall pick from the 2016 draft still has something left in the tank to prove in the NBA.

Rookie center Mitchell Robinson was a beast down low against Orlando—scoring a career-high 17 points, pulling down 14 rebounds, and blocking six shots. I’m at a lost for words to describe the impact Robinson demonstrates on the hardwood. There are moments where Robinson changes the pace and scheme of a game with his length and verticality—and the seven-foot second-round selection practically only attempts shots at the rim. The rook is legit.

Emmanuel Mudiay continued to contribute in his newfound bench role, scoring 19 points, pulling down eight boards, and dishing out three assists. Dennis Smith Jr., the lead guard acquired by the Knicks in the deal with Dallas, has wrapped up the starting role at the point for New York, so Mudiay is adjusting to the first-guard-off-the-bench role that he surpassed for much of the season before the Kristaps Porzingis trade, which saw Smith land in New York despite the ‘Bockers passing over him in the 2017 draft for Frank Ntilikina.

Allonzo Trier took over the fourth quarter once again, with 18 points on only 4-of-5 shooting from the field (he was 9-for-10 from the free throw line).

The Knicks defeated the Orlando Magic in their second consecutive home win—the first one snapped an 18-game home losing streak dating back to December 1st. The Magic had led over the Knicks wire-to-wire in the teams’ first two matchups, and the Knicks didn’t take a lead in any contest between the two until the fourth quarter in Tuesday’s victory. New York has a seemingly easy mark again on their schedule with Collin Sexton and the Cleveland Cavaliers visiting the Garden on Thursday.