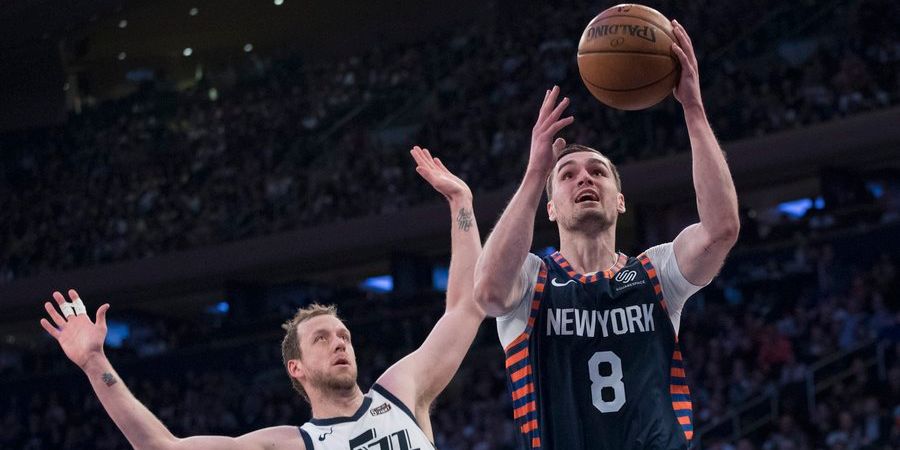 Kevin Knox played practically the entire game in the Knicks’ blowout loss to the Utah Jazz on Wednesday night at the Garden.

The New York Knicks had one of—with many in contention!—their worst losses of the season on Wednesday night at home against Donovan Mitchell, Rudy Gobert, and the fearsome Utah Jazz.

Despite falling to a final margin of 36 points, Knicks rookie forward Kevin Knox scored 27 points while playing nearly the entire game; 46:47 spent on the hardwood, according to NBA.com’s boxscore.

Knox got going early in the game, converting a three-point attempt from deep, which has propelled him lately in finding his footing. The University of Kentucky product’s scoring efficiency has improved when riding hot first quarters and solid shooting from long range. Knox finished the game with 27 points, eight rebounds, and three assists on 10-of-17 shooting from the field and 3-of-6 from three.

The 2015 draft’s fifth overall pick, Mario Hezonja, continues to produce in the starting lineup since returning from injury and savaging blocking LeBron James to seal the Knicks’ win over the Lakers last weekend. Hezonja played the role of backup “point guard” as New York was strapped for playmakers during Wednesday’s contest; Frank Ntilikina, Kadeem Allen, Dennis Smith Jr., and Allonzo Trier were all ruled out before the game. It left Emmanuel Mudiay as the only pure lead guard on the team. While Mudiay would play 34 minutes, David Fizdale would often leave three forwards on the court together, including Hezonja, who was left with some nominal guard duties like initiating the offense.

Hezonja finished the game with 23 points, one assist, and four turnovers.

The Knicks play Friday against Nikola Jokic and the Denver Nuggets in the second game of their six-game homestand. Only 10 precious, futile Knicks games remaining…