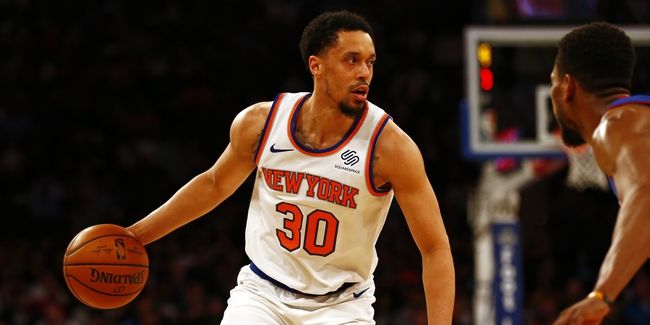 Mitchell Robinson and John Jenkins combined to score 27 points for the Knicks in the team’s final game—and loss—of the 2018–19 season.

All five of Knicks rookie center Mitchell Robinson’s made field goals from Wednesday’s season finale versus the Detroit Pistons came via the alley-oop—Robinson’s offensive weapon of choice in his first NBA campaign.

New York will finish 17-65 on the season, tying with the 2014–15 for the franchise’s worst record. There should be greener pastures ahead compared to the previously unanimously awful Knicks squad, however. Robinson is certainly one of those silver linings, and the play of Allonzo Trier was compelling throughout the season. Even Kevin Knox showed flashes, especially in April and when he won Eastern Conference Rookie of the Month for December.

The Knicks will commence selling their team to impending free agents like Kevin Durant, Kyrie Irving, Jimmy Butler, Kawhi Leonard, Klay Thompson, and Kemba Walker—all All-Stars that New York is banking will net one or two high-profile players to re-energize a team devoid of success in the last six years or two decades if you consider the body of work James Dolan’s team has produced during the Madison Square Garden executive’s tenure as owner.

Robinson scored 11 points while Jenkins added 16 off the bench in the last game before the Knicks embark on the crapshoot of the rejiggered NBA Draft Lottery, occurring on May 14th.

»READ: Which contract-year players should the Knicks re-sign?