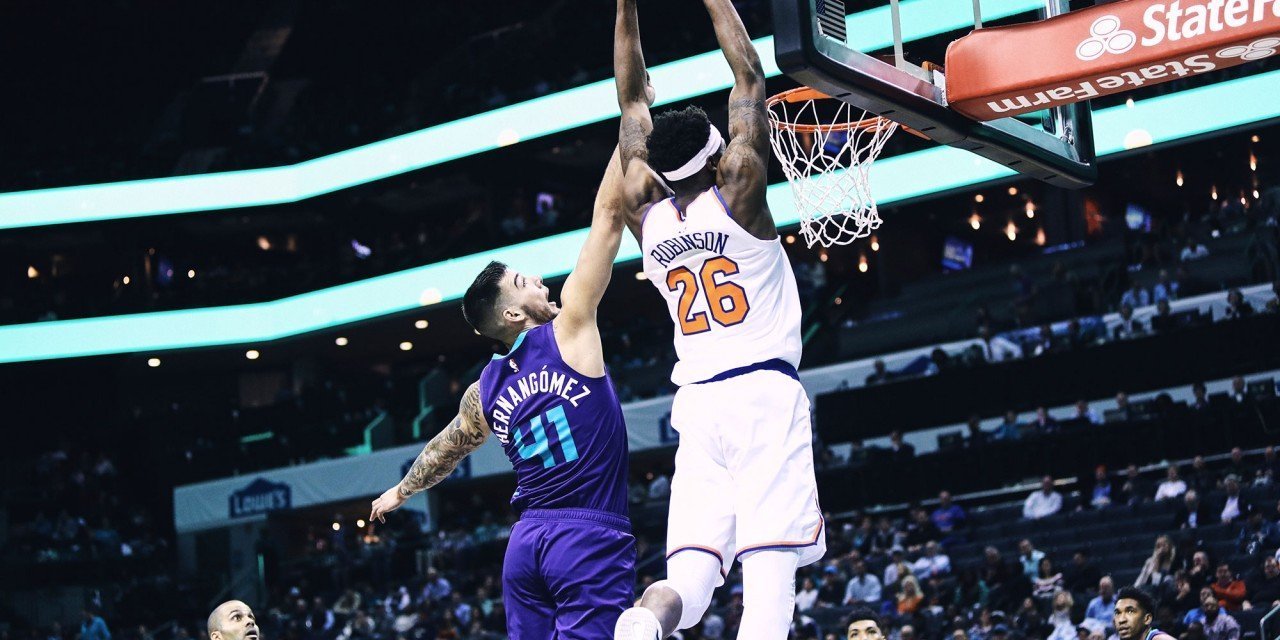 Despite the latest loss, two Knicks rookies and their 26-year-old shooting guard had some bright spots during the 10th straight defeat.

Tim Hardaway Jr., Kevin Knox, and Mitchell Robinson combined to score 46 of the Knicks’ 92 points in the team’s 10th straight loss. Monday night it came at the hands of Kemba Walker and Charlotte Hornets.

After a slump partially brought on by a bout of plantar fasciitis, Hardaway Jr. has steadily improved at the end of January. The former Michigan standout is hoping to make a push towards more reliable scoring and playmaking option for New York as we near the All-Star break.

Hardaway tallied 17 points on 12 shots and 2-of-4 from deep, 10 rebounds (tying his season high in a single game), and four assists in 31 minutes.

Kevin Knox has slowed down in the month of January following his high water mark with December’s Eastern Conference Rookie of the Month honor. Knox’s massive workload and greater minutes in December could be blamed for a slow 2019 stricken by endurance issues and mechanic flaws shooting the ball.

Nevertheless, Knox scored the team’s high of 19 points on Monday in 35 minutes. The University of Kentucky product used his long reach and length to side-step defenders and looked for moments in transition to capitalize off disorganized fast-break defense.

Robinson remains a great and athletic threat in the middle of the court, smashing down alley-oops, mostly from Allonzo Trier, with whom he’s developed a fine connection.

While Mitchell portends to succeed as a lengthy defender for the ‘Bockers, he’s still struggling with defensive rebounds. It’s nearly February and the Louisianan has more offensive boards than defensive ones—and for good reason. Robinson, the raw and impactful talent, is lacking key fundamentals like boxing out; Mitch is relying on blocking shots without standing tall and altering them while being in a solid position for the defensive board.

No matter, at 20 years young, Robinson still has plenty to learn as he continues to develop on the rebuilding team.