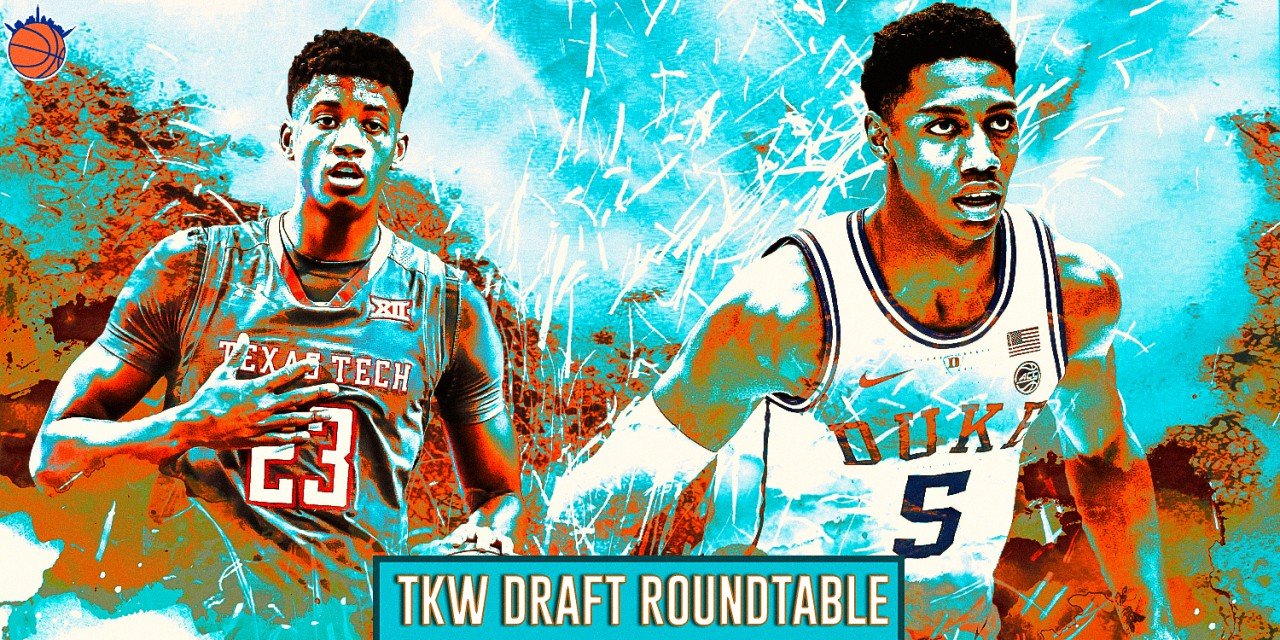 Who do the Knicks end up selecting at three? Do they trade down or trade for a star instead? These draft questions and more are posed to The Knicks Wall staff.

The New York Knicks are set to make their highest NBA Draft selection since the franchise tabbed Patrick Ewing as their homegrown star with the first pick in the 1985 draft.

With the third overall pick, however, divisiveness and uncertainty have plagued Knicksland. Due to polarizing opinions on prospects such as R.J. Barrett and Jarrett Culver, plus the untimely Achilles injury to top free-agent target Kevin Durant, the Knicks have perhaps never entered the league’s offseason with more questions.

Will Barrett be a star in his own right with or without the addition of a Durant? Should the Knicks opt out of the third pick and instead trade down to secure more assets? And what should the team do with disposable players like Frank Ntilikina, who the organization is seemingly out on?

Five of The Knicks Wall’s staff writers came together to answer pressing questions concerning the team on the day the franchise could be altered with its highest pick in 34 years.

1. Which prospect should the Knicks take: R.J. Barrett or Jarrett Culver?

Tyler Marko: This was way closer for me before Durant went down. I saw Culver as a much better fit next to an established star, but now I’m firmly in the Barrett camp. With KD and the Knicks’ future in flux, I think they should be swinging for a star at three. There’s a reason Barrett came into last season ranked above Zion, and if Durant still comes, then Barrett will have a year of NBA experience by the time his Achilles has healed.

Nick Scolaro: R.J. Barrett. I believe he is more talented than Jarrett Culver and has a higher ceiling. Culver often disappeared during games offensively, especially during the NCAA tournament. Barrett has a more NBA-ready body and displayed a killer instinct in only one season in school, which Culver doesn’t seem to have developed quite yet.

Eugene Rapay: I fell in love with Jarrett Culver towards the end of the 2018 college basketball season, and once he blew up with a breakout year and a fun-to-watch Texas Tech NCAA tournament run, that love only multiplied—but don’t get it twisted. Sure, all of the buzz and hype was for Zion Williamson, but R.J. Barrett is more than a consolation prize. Don’t let the hoopla surrounding Zion fool you into thinking Barrett was overrated. Barrett has succeeded and transitioned well at every level of the game so far. He was a higher-rated prospect than Zion coming out of high school for a reason. The skill and athleticism are there, with stamina and durability to boot.

Lawrence Scotti: I like R.J. Barrett over Jarrett Culver. With the third pick, Culver would be the safer selection. He boasts better defensive intuition coming right into the league and will probably have a smoother transition immediately entering the pros. But the Knicks are not drafting these guys for the player they will be tomorrow—they are drafting for the best version of the player, and Barrett has the case to be a more dynamic player over the course of his career. While I like Culver, Barrett should be the pick.

2. Are you comfortable with the Knicks trading back? Is there a move you could see coming or a trade you would absolutely veto?

Kevin: No. The Knicks should only consider trading pick no. 3 if it involves a deal for Anthony Davis…and it’s too late for that. Stay put.

Tyler: The Knicks should definitely be listening to any and all offers, but they should stay put unless they’re blown away by an offer. I just don’t see another team falling in love with Barrett and backing up the picks truck, especially since he isn’t working out for any other teams. There’s been a little talk about the Pelicans moving up from four to three, but it just doesn’t make sense. Surrounding Zion and R.J. with Lonzo Ball and Brandon Ingram is one way to have worse floor spacing than Duke last year.

Nick: I am not comfortable with the Knicks trading back. This draft class is very top heavy and it is important that the Knicks get a young star like Barrett, who they can hopefully develop into the next big thing in New York basketball. The Knicks have picked toward the later end of the top 10 multiple times recently and it hasn’t worked out so far. Use that top-three pick and go get a stud player.

Eugene: I’m not really a fan of the Knicks potentially trading back. I could see it if the Knicks absolutely fall in love with someone outside of the heavily favored/consensus top three, but they really shouldn’t do it. For a while, it was widely considered that there was a huge drop-off between the trio of Zion Williamson, Ja Morant, and R.J. Barrett versus everyone else.

I could see the Knicks potentially trading to move a few spots back—I’d would be shocked if they moved out of the lottery—but they shouldn’t overthink it or complicate it.

Lawrence: I would not trade this pick to go backwards in the draft. There are only a few guys who have the ability to become All-Star-level players in this draft, and the Knicks are in a spot to draft one. There are certainly interesting trade scenarios out there, but the smartest move would be to stand pat, take the pick, and carry on.

3. Should the Knicks flip their third overall pick in a deal (like for Bradley Beal), or should New York look to flip Frank Ntilikina or Dennis Smith Jr. in any other trade?

Kevin: The Knicks should absolutely under all circumstances avoid a trade for Bradley Beal. Keep the young core, draft Barrett at no. 3, and don’t look back.

Tyler: Perry and Mills should see what guys like Ntilikina and Smith Jr. can fetch, but neither should be worth enough to justify trading them at this moment.

With the team looking at the possibility of continuing the rebuild, both of them are worth more to New York than any other team. Frank’s value has never been lower, and unless another team is in love with DSJ, it’s better that the Knicks see what he can become.

The team should call also Washington—unless they do indeed lure Masai Ujiri away from Toronto—to check on how much Bradley Beal would cost. Running out Beal with whichever young guys are left over could help accelerate the Knicks out of this stage. Not as much as adding a healthy Kevin Durant, but with Beal the team should be poised to make a leap before the 2020–21 season. Then they could sign another free agent, or Durant could come back. Just make sure to hang up immediately if Masai answers—we’re not going to do that again.

Nick: I don’t believe the Knicks should flip their pick for Bradley Beal, given the landscape of free agency. Beal by himself won’t get the job done, and it seems like no elite-level free agent will be running with the Knicks next season. If the Knicks are going to make a trade, they should shop around Frank or DSJ for some draft capital if anything. It seems like this year will be another year of developing talent, and the Knicks have shown you they are capable of finding talent in the second round. If the offer is right, I wouldn’t be opposed to jettisoning one of those guys.

Eugene: Bradley Beal? I think I like that idea, if the price is right. The Knicks need to be smart about it and not let the Wizards think they’re in desperation mode for a star, since Murphy’s Law seems to be in full swing considering the missed opportunities. If the asking price isn’t outrageous, I don’t see why not. He’s coming off of a great season, isn’t really a diva or a problematic player, and if worse comes to worse his contract expires in two years and we start this wonderful process all over again.

Lawrence: Beal is a special player on a great contract that lasts two more seasons. While the Knicks have the straight capital to make a move for Anthony Davis, maybe Beal is more the Knicks’ flavor. It would take a lot to get him, but the Knicks are armed with a top-five pick, Kevin Knox, Dennis Smith Jr., the Dallas future picks, and their own future picks. Beal is worth moving those assets for, and watching what the Celtics did—sitting on all their draft picks way too long and never cashing them in—that makes me nervous. Make the move if it is available to you. Ntilikina and Smith Jr. should be available for trade in a Bradley Beal deal.

Further, on Ntilikina, while there is still a shred of hope he could develop into a valuable player, it won’t be in New York. I love him, but it would be best for both sides to find a fit elsewhere. The Knicks should pray to get a late first-rounder/early second-rounder for him, considering his trade value is at an all-time low.

4. Who do you want the Knicks to select at three, and who do you think they end up drafting?

Kevin: If the Knicks ending up staying pat at three, they should select R.J. Barrett. He’s easily the safest pick and has made it very clear he wants to be in New York. I believe the Knicks will take Barrett at three, assuming Zion Williamson and Ja Morant are selected first and second overall, respectively.

Tyler: Don’t overthink it. Just take Barrett. Taking Culver or Garland would undoubtedly create waves, but neither should lead to Knicks fans rioting. Both could be great pieces on a decent team, but without KD the Knicks likely won’t be able to meet that qualifier—at least not this year. Had Zion not gone to Duke then R.J.’s stock would be much higher. Don’t let a bad situation keep you from taking a potential star. I have a feeling that the Knicks won’t.

Nick: R.J. is the guy I want to see on the Knicks next year, because I believe he will be the best available player at that spot and has the chance to be a special offensive player. I do ultimately believe they will select Barrett third.

Lawrence: I want the Knicks to draft Barrett, and it looks like they will do just that. He’s the best player to take in that spot. While I have thought deeply about what taking Darius Garland or Jarrett Culver would look like, Barrett makes the most sense at no. 3.