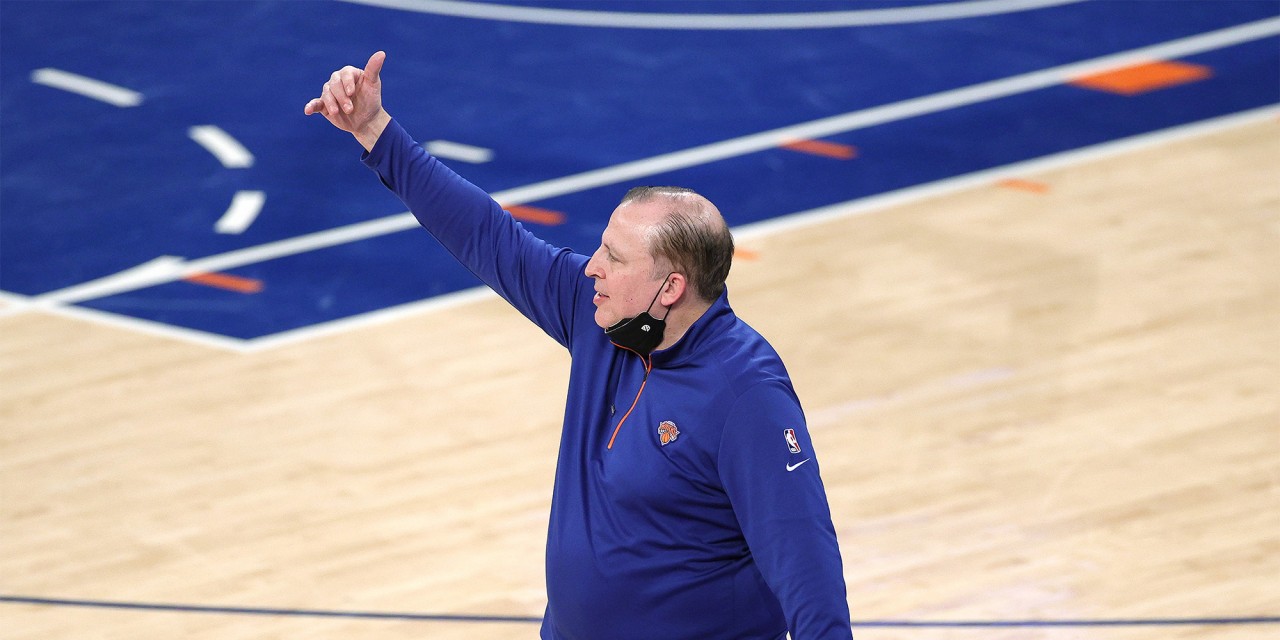 Tom Thibodeau grew up a Knicks fan and found his way in New York as an assistant coach in the 1990s. Two decades later, he became the franchise’s third NBA Coach of the Year award recipient.

NEW YORK, NY — Tom Thibodeau won the NBA Coach of the Year Award in his first-ever season as a big-league head coach. After taking the reins of the Chicago Bulls, he led the 2010–11 team to 62 wins—a league-leading mark and 21-win improvement from the previous season. The Bulls improved on both sides of the ball and Derrick Rose blossomed into a superstar, winning that season’s MVP award.

A decade later, Thibodeau proved he still has it. He led a similarly impressive turnaround with the New York Knicks in the 2020–21 season, taking a team with a bleak outlook and making a fourth-seeded playoff team out of it. The Knicks won 41 games after winning 38 across the previous two seasons and posted a top-five Defensive Rating. His efforts earned him another Coach of the Year award, the third coach to win in franchise history.

“It was a special season, so I want to thank everyone,” Thibodeau told the media on Monday evening. “But I also want everyone to recognize that it was a group effort.”

Thibs said it's an honor to win the COTY award. "I think this award reflects more of our group and our team and organization," he said. "Any time someone gets recognized individually, it's usually a byproduct of the team winning and exceeding expectations." pic.twitter.com/kcwgThBXQW

Thibodeau’s imprint on this Knicks team was crystal clear. They played hard-nosed defense night after night with an edge that drew comparisons to the 1990s Knicks teams. But the Knicks’ imprint on Thibs is just as big, if not bigger.

“I grew up being a Knicks fan,” he said, adding that he idolized Red Holzman, the coach who led the Knicks to their only championships in 1970 and 1973, as well as those teams’ star players Willis Reed, Walt Frazier, and Dave DeBusschere. He joined Jeff Van Gundy’s staff in New York as an assistant coach in 1996, working with the last conference champion Knicks team.

Both eras of Knicks basketball engrained defense into their identities. They looked to outwork and outmuscle their opponents. The 2020–21 Knicks team didn’t get anywhere close to the glory of those teams. But they did legitimately revive the defensive identity that has long been absent from Madison Square Garden.

Going into the season, Thibodeau said the team wasn’t sure how good it would be. He mentioned that defending homecourt and building “championship-caliber habits” were goals the team laid out before the season. “Once we got around the players and we saw how committed they were to playing as a group and sacrificing for each other, we felt we had a chance,” he said.

New York’s 2020–21 season was a rousing success. Julius Randle won the league’s Most Improved Player award, midseason acquisition Derrick Rose was named a finalist for the Sixth Man of the Year award, the team posted a top-three three-point percentage in the league and went on the franchise’s first nine-game winning streak since 2013.

“Each job is different,” Thibodeau said, referring to coaching gigs. “You go in with an open mind. You know what the challenges are going in.” New York’s open coaching gig, which Thibodeau filled last June, seemed like one that only offered challenges. The progress of the team’s young players and the draft capital the front office could net in exchange for the team’s veterans were the only meaningful markers for success at the start of the season.

At the start of Thibs’ tenure, there were very few avenues to make a successful team out of the group of players the Knicks had. Tom Thibodeau found one, reinvigorating an endlessly frustrated fanbase with never-seen-before energy. Winning in such a surprising fashion brought a new jolt of energy to the Garden, which Thibodeau has mentioned and praised throughout the year.

When Thibodeau took the job, the Knicks were in the midst of an extended offseason. Thibodeau said the challenge of navigating his new position in the middle of a pandemic was maximizing time with his new roster. “It gave us time to learn about each other, and that’s what I loved about Julius. The first time I called him, I asked him to come in and he came in the next day or the day after. It was right away.”

Randle’s work ethic was a sign to Thibodeau that this team had potential. They both became the biggest icons of the Knicks’ turnaround campaign—the coach who put the plan in place and the player who led the show on the court. Their tenacity trickled down the roster. “Just the way they played and they sacrificed and they played for each other, it was special,” Thibodeau said. “Every day, you look forward to seeing these guys. They gave you everything they had.”

Thibodeau and Randle’s hardware were good starting points for the Knicks’ latest rebuilding project. But there is still a lot of work to be done, as evidenced by how convincingly the team was defeated in the first round of the playoffs. The team needs upgrades and Thibodeau has room to improve as a coach, namely with lineup flexibility and offensive identity.

The work is just starting for Thibodeau’s third stint as a head coach in the NBA. As the orchestrator of a band of overachievers, he is in a position to build something special in New York, where his love for basketball began.