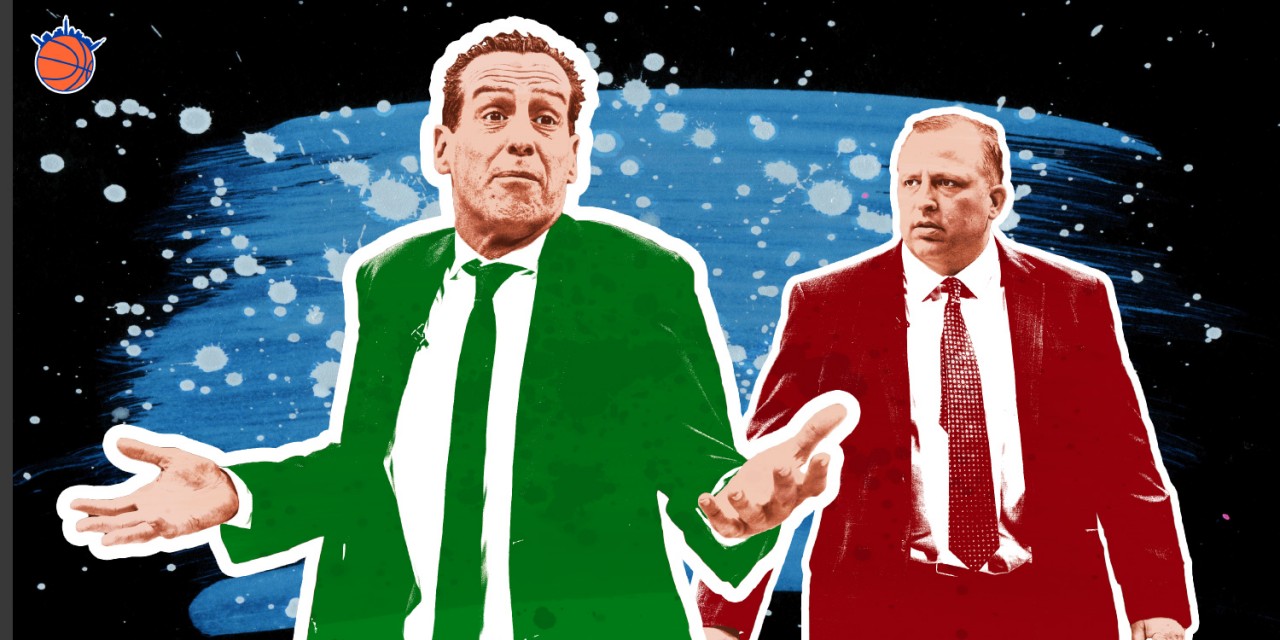 Tom Thibodeau lights up the Knicks radar, but another former assistant in Kenny Atkinson should be considered the prime target.

Those who do not learn history are doomed to repeat it. The recent history of the New York Knicks has been nothing but doom and gloom, which is why the team has gone through three team presidents in four years.

A common theme in the bad years has been poor management and questionable head-coaching decisions, with David Fizdale being the most recent winner to be paid not to work. Mike Miller impressed Rose this season, but that feels more like a vote of confidence in Miller staying with the team in another role than an endorsement to remove the interim tag.

So far that head coaching search has existed as long as basketball itself. The only true candidate for the job is Tom Thibodeau, the only name consistently linked. Thibodeau checks off many of the boxes the Knicks typically look for in a head coach: he is liked by veteran players and a known name with connections to the better days at Madison Square Garden.

Thibodeau was an assistant under Jeff Van Gundy in New York, when the Knicks made their most recent NBA Finals appearance 21 years ago, and would follow Van Gundy to Houston before linking up with Doc Rivers and the Boston Celtics to be the de facto defensive coordinator, appearing in two Finals, winning one in 2008.

Thibodeau’s head coaching career is a little less inspiring. His first head coaching gig with the Chicago Bulls started out strong but never felt the same once Derrick Rose tore his ACL. Thibs left the Bulls with a 255-139 record, peaking in his first season with a 62-20 record. His Minnesota Timberwolves stint was much less successful and a major reason I think Thibodeau is not the best option for this Knicks team.


The Knicks are nowhere close to contending like the Bulls were when Thibodeau arrived, and do not have a player close to the quality of Rose, Jimmy Butler, or Karl-Anthony Towns. Thibodeau knows his stuff, there is no denying that, and can mastermind a league-best defense given pieces like Frank Ntilikina and Mitchell Robinson with which to work. But this isn’t a situation he is used to.

In his previous head coaching spots, Thibodeau was given the keys to teams built to win immediately with a viable top scorer, the major missing piece on the Knicks’ current roster.

As gifted as he is on the defensive side, Thibs’ record building a good offense is lackluster. In his five years with the Bulls, Thibodeau’s teams never sniffed the top ten in the league in points per game, peaking at 15th in his final season averaging 100.8 points per game. Things were a little better with Minnesota, with the T-Wolves finishing eighth in the league, thanks to the addition of Jimmy Butler to go with a rising star scorer like Towns. There will be no such luxury in New York, and there is reason to be concerned with what the offense could look like under Thibodeau should he be given much of the same roster David Fizdale was.

Defensive shortcomings can be fixed with some simple adjustments: playing Robinson and Ntilikina substantial minutes for example could give the team defense an immediate boost. Offense is a different story.

The team has been without a true system since Mike Woodson, mostly relying on isolation to generate their points, and disregarding the rest of the league’s expansion to three-point line, and have lived in the basement of the league in the scoring department including this season where the team ranked 29th, averaging 105.8 points per game.

Offense remains the biggest problem with the Knicks, and not having a true top option is a big reason for that. Thibodeau had the blessing of coaching Rose when he arrived in Chicago, Towns in Minnesota, and Butler in both. He will find no such scorer in New York, barring a monster leap from R.J. Barrett or a blockbuster trade from the clouds.

The more pragmatic approach is focusing on a coach who is capable of doing more with less, someone who understands what coaching during a rebuild entails and experience coaching a roster filled out with journeymen and neophytes. That guy is Kenny Atkinson.

Atkinson was foolishly fired by the Brooklyn Nets after overseeing one of the league’s more impressive rebuilds, and could be the ultimate clap back if Atkinson were to do the same for the Knicks. Prior to helping lead the turnaround in Brooklyn, Atkinson was an assistant coach for the Atlanta Hawks and, before that, started his career with Mike D’Antoni in New York during the only sustained period in which the Knicks were watchable since 2000.

It was a slow climb to transforming into a playoff team, but Atkinson was able to get a basement dweller to the playoffs in four years. This season, with Kyrie Irving playing 20 games, Caris LeVert missing a large chunk of games, and no Kevin Durant, Atkinson’s Nets were the seventh seed in the East, in the middle of the pack in scoring, with a top-10 defense. His middle-of-the-road offense is a little more impressive when you factor in a black hole like DeAndre Jordan pulling 22.0 minutes per game. The development of the Nets’ young players is another key indicator that Atkinson is a capable rebuilding coach.

Spencer Dinwiddie, LeVert, and Allen all improved under Atkinson. D’Angelo Russell had his lone All-Star season with the Nets. The lack of star power Atkinson had for most of his Brooklyn tenure would be what awaits him with the Knicks, but with the right development and system, these rebuilding years will not have to feel like pulling teeth—an apt description for watching the team most of this season.

A key trait of Atkinson’s Nets teams was shooting the three. In each of his four seasons as head coach, the Nets ranked in the top five in three-point attempts. For some context, in that same four-year stretch the Knicks ranked 29th in the league twice and peaked at 21st. The Knicks can pivot to this model, especially if they are able to shed non-shooters like Dennis Smith Jr. and Randle.

I understand it’s not all roses with Atkinson, he had his shortfalls too. His late-game decision making is the most common criticism. The Knicks had their fair share of late game mishaps under Fizdale too. But if that’s the only problem, it’s one of those good problems to have. Under Fizdale, late-game issues were just one of a myriad of obtacles.

The common ground between landing a trusted name like Thibodeau versus a “culture changer” like Atkinson is hiring them both, a possibility that simply does not exist. Thibodeau has only been linked to the Knicks so far but as the league offers closure on this weird season other teams are sure to have interest. Atkinson should have no shortage of suitors either.

Unless Rose has plans we are not aware of—trading for a veteran like Chris Paul and bringing back Carmelo Anthony—not having Atkinson over Thibodeau makes little sense. One guy has been engineering the toughest turnaround in recent league memory, the other struggled without MVP-caliber players to carry his offense.

The best thing Rose, and anyone of influence at MSG can do, is plan for the team that is here today. Planning too far ahead is likely what led to Fizdale being hired, don’t let that happen again.

Leon Rose made his first acquisition as president of basketball operations, adding capologist Brock Aller, now formerly of the Cleveland Cavaliers’ front office. Aller is a nice acquisition to Rose’s braintrust and will be key if/when Rose decides to take his big swing. If Aller was part of a team responsible for satisfying LeBron James’ insatiable appetite to compete on a small-market budget, working with the bottomless budget of the Knicks should be a piece of cake.

All season I looked for a reason to not like Perry, I’ll admit it. The Porzingis trade always rubbed me the wrong way, but I was never able to blame him with Steve Mills looming over his shoulder. Well, thank you to Marc Berman of the New York Post for this nugget:

“Knicks GM Scott Perry has never been a fan of Ntilikina. Working for Sacramento in 2017, Perry took D’Aaron Fox at No. 5 and never considered Ntilikina. When Phil Jackson selected Ntilikina three spots later to run the triangle, Rose was Ntilikina’s agent. Ntilikina fired Rose after last season to work with French rep Bouna Ndiaye, but Rose saw lots of potential in the Strasbourg point guard, got to know his family. There’s a strong connection there. Whereas Perry shopped Ntilikina often, that may not be the case under Rose, especially with Ntilikina’s progress as a penetrator.”

This is a major explanation for why we were subjected to so much Emmanuel Mudiay and Elfrid Payton. The problem isn’t so much that Perry doesn’t like Ntilikina’s game, it’s the fact he never seemed to give the Frenchman a chance. The true potential of Ntilikina is a hot topic among fans but there is no denying something that can contribute to winning is within Ntilikina, and Perry never thought to seek it out.

It was nice knowing your Scott, kudos on the Marcus Morris trade and thank you for not bloating the cap, but please drop off those papers.

The NBA is mulling a decision to open up practice facilities for teams in cities not affected by a coronavirus outbreak May 1st, allowing players to get individual workouts in. The Knicks (or Nets for that matter) do not fit into this category, as New York is mandated to keep facilities closed until at least May 15th, but players can still be able to get in some work.

Team facilities that could be opened will not have restrictions on who can work out there, for example, R.J. Barrett is quarantining in Orlando could be able to use the Magic’s facilities if the league does follow through. What happens with Taj Gibson or Ntilikina (the only two Knicks still in New York) is more unknown but this step by the league could be a step in basketball returning at some point in 2020.