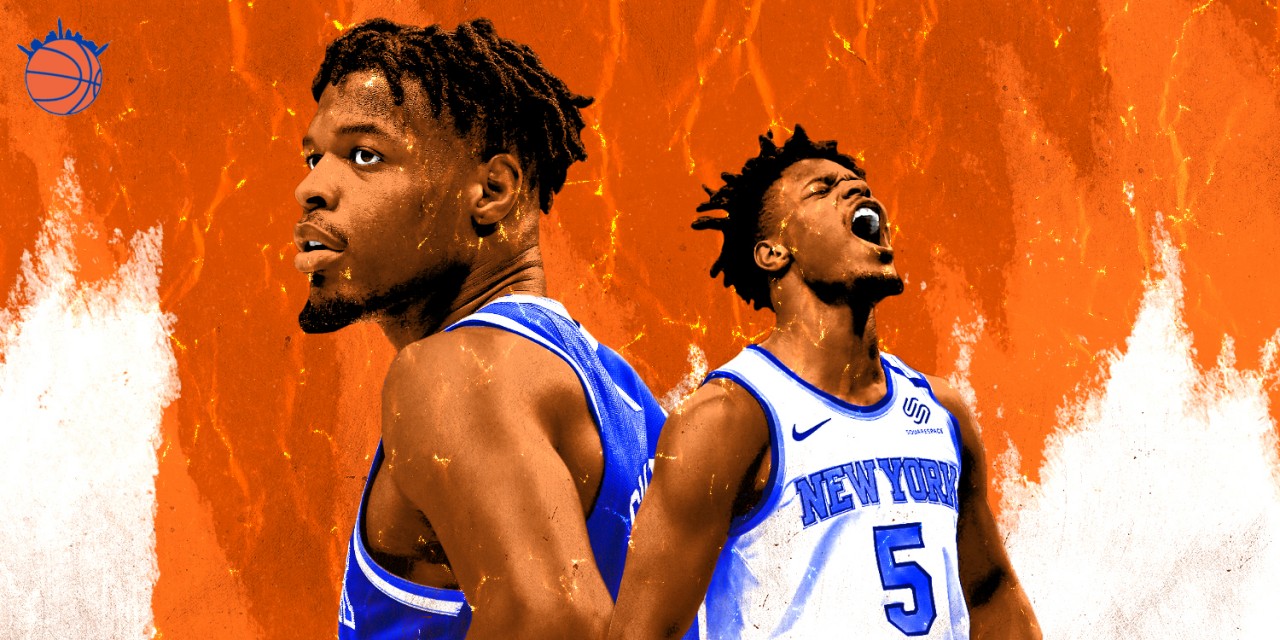 After hiring Tom Thibodeau, the Knicks may be on the heels of a Dennis Smith Jr. rejuvenation. The young point guard is on his last legs in New York.

“We’re going to get you right” still sends shivers down the spines of New York Knicks fans.

It was the fatal phrase that came out of a freshly hired David Fizdale’s mouth at his introductory press conference. The comment was directed at Emmanuel Mudiay, who sat in the front row. Fizdale was a man of his word. Mudiay played early and often; he averaged 27.2 minutes per game, which translated to a career-high 14.8 points per game.

The team was not as successful as Mudiay, who was able to secure a deal with the Utah Jazz last summer. The Knicks remained bottom-feeders, and Fizdale is back as a recurring ESPN analyst.

Mudiay’s arrival in New York, on its face, is not much different from Dennis Smith Jr., a fellow lottery pick who found his way to the Big Apple. The key difference is Mudiay came at a bargain, whereas Smith came at a premium. Given the failings of last summer, Smith remains the “centerpiece” of a trade that saw Kristaps Porzingis end up in Dallas. Smith having a remotely decent stint in New York was crucial to Steve Mills and Scott Perry saving face for jumping the gun to secure cap space.

Mills is already gone, and Perry will soon follow his lead. As for Smith, there is still hope in the form of Tom Thibodeau.

Player development was the main reason behind hiring Thibodeau, and there is quite a bit developing to be done. Dennis Smith would be a great starting point namely because Thibodeau has had success with such a wide variety of point guards.

Anyone who watched Thibodeau’s Bulls saw the potluck of point guards who succeeded under Thibodeau’s tutelage. Derrick Rose is the shining example, but there were plenty of unknowns who managed to be productive players once Rose went down. C.J. Watson, Nate Robinson, John Lucas III, and D.J. Augustin are the notables, and there are probably a few omissions.

All had kind words for Thibodeau. Rose noted that Thibodeau was one of the few who believed in his resurgence. Augustin echoed similar sentiments, crediting Thibs with restoring his love for the game.

“Not only did he give me the opportunity, he actually brought my love for the game back,” he told NBA.com in 2014. “You kind of lose that a little bit, your passion for the game, throughout the years in the NBA depending on playing time and different situations you may be put in. Coach Thibs, I owe him a lot. I give him credit for bringing my passion for the game back and wanting to learn and play hard.”

Smith has the profile to be the next point guard reclamation prospect under Thibodeau. Thibodeau has proven that he is not shy to play anyone at the point, and Smith has many of the characteristics that Thibs likes in his guard—namely getting to the rim.

In order to get the best out of him, Thibodeau will have to restore Smith’s mojo. The return to his NC State No.4 is a step in the right direction. It’s easy to forget, but Smith’s initial arrival was not the train wreck last season was.

His first 21 games led many to believe the Knicks had something, and LeBron was indeed correct about Smith being a good player. When he arrived in NYC it was as a player who had little doubt that he belonged on the bright lights.

Smith had strong chemistry with DeAndre Jordan and used that as a boon to hit the ground running. He began to develop similar rapport with Mitchell Robinson, connecting on some fun alley oops.

All that came to a screeching halt last season. Smith started the season with a back injury, then had to leave the team due to personal reasons, and returned to the Garden crowd cheering for Frank Ntilikina while Smith struggled on the floor. The poor start seemed to snowball into a season Smith should erase from his memory. He didn’t see the court a hell of a whole lot the rest of the way, playing fewer total minutes in 34 games last season than he did in 21 games to end 2018–19.

There could be a few reasons for Smith’s sharp decline. For starters, his back may not have healed fully, but that disregards the clear lack of confidence he had on the court.

this is just sad. pic.twitter.com/7TTIl9Aj7R

The two areas Smith really fell off a cliff were his shooting and playmaking. Smith shot an icy 34.1% from the field last season and 50.9% from the free throw line. His three-point percentage was even uglier, connecting on just 29.6% of his attempts. Which brings up one of the key flags in Smith’s confidence decline: he attempted 1.6 three-pointers after hovering around 4.0 per game for most of his career. The same can be said for his free-throw line visits, which were also a career low 1.6 attempts per game.

Playmaking, or lack thereof, was the most concerning. Smith looked like a man with no country. On the court time he did receive, Smith rarely made an impact. He did not thrive in what became a plodding iso-heavy offense that featured way too many halfcourt sets.

The good news for Smith will be stepping into an offense more tailored to his skill set. Tom Thibodeau was a fan of Smith’s game long before he became head coach of the Knicks, and the interest is easy to explain. Smith possesses a similar blend of quantum leaps with great speed that Derrick Rose once had at his peak. Thibodeau already said he wants to attack the rim and shoot a ton of corner threes. That plan fits a slasher with Smith’s potential to carve himself out a role.

The bulk of Thibodeau’s work will be decision-making. Smith averaged a paltry 2.9 assists per game and did not flash a ton of chemistry with anyone other than Robinson. The plan of attack could be a partial path towards improvement.

Playing downhill was always the appeal to Smith, and in the moments he has done that in New York the results have been strong.

Dunks and transition buckets are not only get the Garden crowd going, it gets Smith’s confidence up. While shooting off-the-dribble (or shooting in general) is not the area where Smith will do the most damage, being able to mix in a jumper or two will keep the defense honest.

Once his offense is straightened out, the rest of his game should fall in place. Smith has shown flashes of being able to find the open man.

Dennis cross-court dime to Knox for the corner trey pic.twitter.com/ev6FkMFiJS

Point guard minutes will be easier to find this season with Elfrid Payton likely not sticking around. Thibodeau’s dream of drive and slash sounds like it would favor Smith more than Ntilikina—not to mention, Ntilikina could see minutes at both guard spots.

There is still time for Smith’s Knicks career to be defined by something other than being the guy for whom, in practice, the team sold Kristaps Porzingis. If anyone is going to get Smith right, it would be the coach who once made the playoffs with John Lucas III and C.J. Watson as his lead guards.

It’s certainly a do-or-die season for Smith in New York, but luckily for him, he has just about the only guy who would be willing to save him.