The hiring of Tom Thibodeau could alter the direction the Knicks take in the 2020 NBA Draft, depending on the skills they prioritize from prospects.

The New York Knicks recently announced the official hiring of Tom Thibodeau, which, paired with Scott Perry’s continued tenure as a lame-duck general manager, has led many to wonder just what amount of input the new head coach will have in the upcoming draft process. Though we don’t know exactly how much Thibs will have Leon Rose’s ear, considering their long-standing relationship, it seems safe to assume there will at least be some exchange of ideas taking place. So what can we learn from the history of his team’s draft choices?

It’s easy to see why the idea of Thibodeau’s voice carrying a lot of weight might makes some fans of the team a little queasy: his track record of personnel decisions as the President of Basketball Operations in Minnesota was spotty at best.

One of Thibodeau’s biggest blunders therein was overlooking good players in the draft. OG Anunoby, Kyle Kuzma, Derrick White, and even Josh Hart are now valuable contributors on teams with a range of playoff ambitions (not unlike the players making Perry’s selection of Kevin Knox look worse by the day). All four, along with John Collins, were available with the draft pick the Timberwolves somehow pried from the Bulls in the Jimmy Butler trade.

Instead, Thibodeau and old friend Scott Layman opted for Justin Patton, a raw, project center whose best-case skill set was rendered redundant with franchise centerpiece Karl-Anthony Towns. To make matters worse, injuries limited Patton to just nine games in the last three years, though that was by no means Thibodeau’s fault.

The year before that, Thibs drafted Kris Dunn fifth overall; Buddy Hield and Jamal Murray were the next two picks off the board. Dunn seemed like a prototypical Thibs guy, with his grind-it-out play style and hard-nosed defense, so the move was at least somewhat reasonable. What wasn’t reasonable was this little tidbit tweeted out by Adrian Wojnaroski on draft night:

Tom Thibodeau has had Kris Dunn No. 1 on his draft board. Here's his chance.

Having Dunn over Ben Simmons and Brandon Ingram was ridiculous at the time, and is even worse in retrospect. Dunn had a disastrous rookie season—think Frank Ntilikina but four years older, somehow worse on offense, and much less handsome—and was sent to Chicago the following summer in the aforementioned Jimmy Butler trade.

In his final summer with the Timberwolves, Thibs probably had the best draft of his executive career, taking Josh Okogie at no. 20 (Aaron Holiday, Anfernee Simons, Landry Shamet, Gary Trent Jr., and Devonte’ Graham were all available, as, of course, was Mitchell Robinson) and Keita Bates-Diop at no. 48. Both were defensible moves at the time, and though Okogie was picked before several guards who have showed more in their first two years, he has some promise as an energetic, athletic, defensive specialist—not unlike Dunn.

From his time in Minnesota we see, perhaps unsurprisingly, an emphasis on raw athleticism and defense with some token nods to the need for shooting, as Bates-Diop and Patton both projected as decent positional shooters. The list of players drafted during his time with the Bulls has slightly wider range, with classic Thibs guys like Butler, Snell, and even Marquis Teague (ask Nate Robinson, John Lucas III, or Aaron Brooks how much Thibs loves his undersized point guards) mixed with some very anti-Thibs moves: trading up to draft Nikola Mirotic, who wouldn’t come to the NBA for three more years, or trading two plus-defensive prospects in Gary Harris and Jusuf Nurkic for the rights to draft future former Knick Doug McDermott. 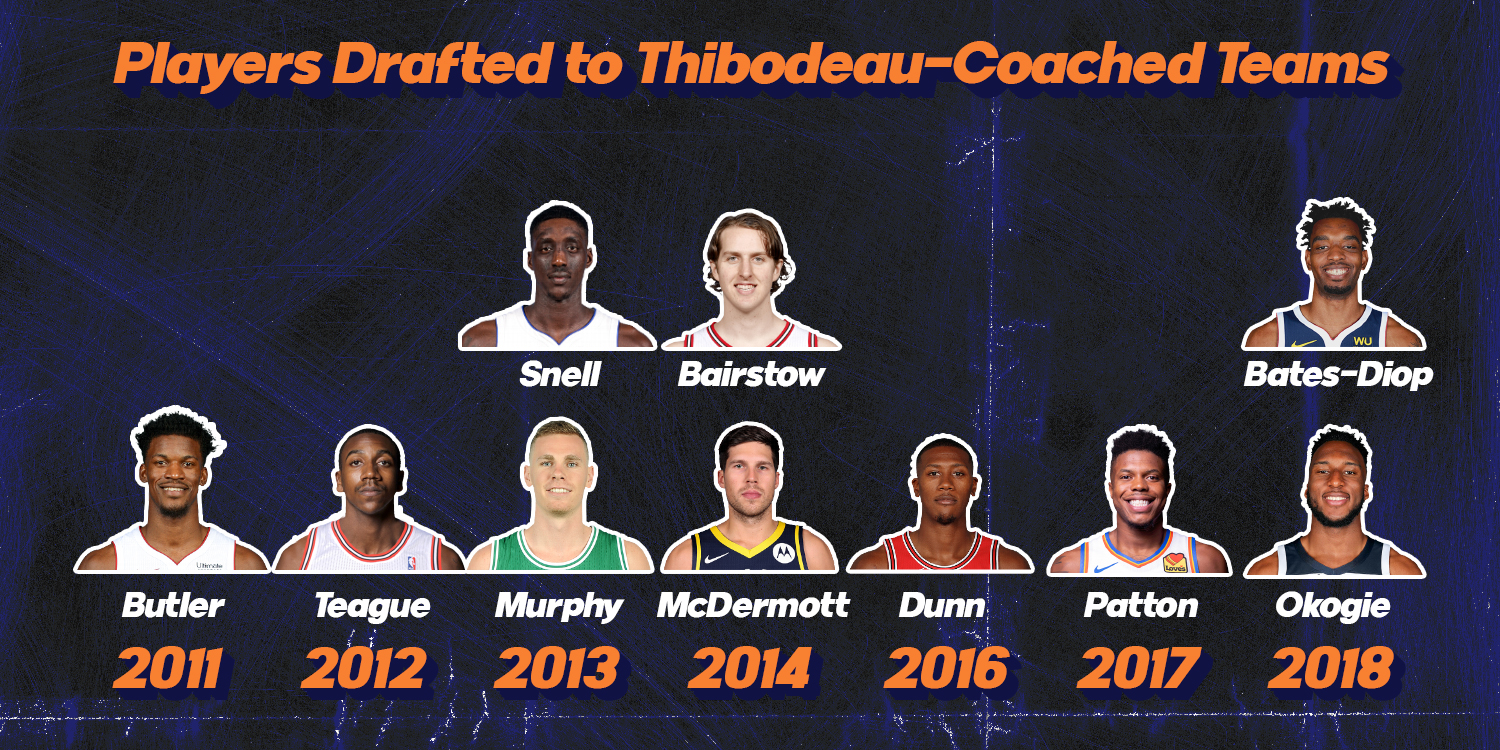 (An interesting point to note: Patton and Teague are the only players drafted to a Thibs-coached team as freshmen, and Okogie was the only other underclassman of the bunch. For those keeping track at home, that’s seven of 10 non-European draftees who were either juniors or seniors when selected.)

Now, does this guarantee the Knicks will take Obi Toppin or Saddiq Bey (at 22 and 21 years old, respectively; they’re the oldest likely lottery prospects in the class) with their top-10 pick? Of course not. However, it’s not crazy to think he could see a Toppin/Robinson pairing as the 2020 revamp of his classic Carlos Boozer/Joakim Noah frontcourt, and that Rose, if he wants to start winning now, might see him as the most ready-made prospect available.

Tyrese Haliburton, Killian Hayes, Tyrese Maxey, and Deni Avdija also seem like prospects who could catch the eye of Thibodeau if they’re drafting outside of the top three. All show a commitment to team defense that would likely appeal to similar-minded coach, with some positional versatility on both ends. The nightmare scenario would be Thibodeau convincing Rose to take James Wiseman on the strength of his physical tools and the faintest whisper of a fledgling jump shot. Given the positional and skill set overlap with Robinson, this would be pretty similar to the Patton/Towns decision, with the obvious caveat that Robinson isn’t close to the same  level of franchise player as Towns.

While we can’t know how much Rose wants Thibodeau to be a part of the drafting process, it seems inevitable that Thibs’ presence will impact the decision. Whoever they chose will go a long way in indicating how patient and ambitious the new braintrust plans to be over the next few years.

»READ: Is James Wiseman a (sneaky) good fit on the Knicks?