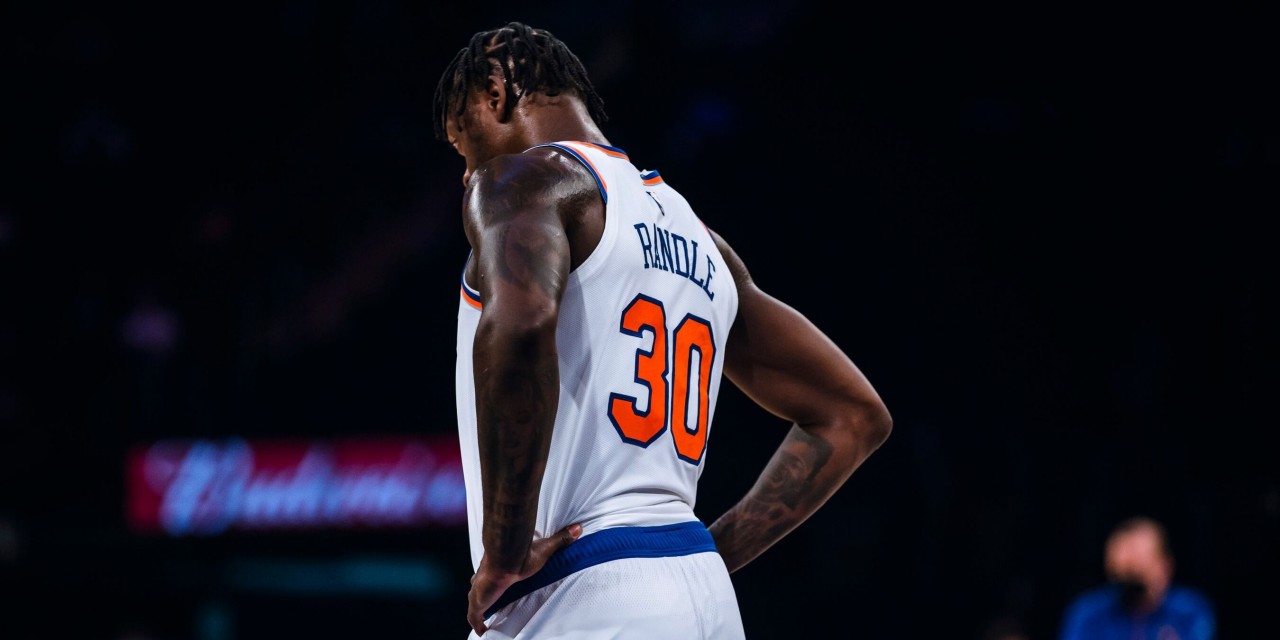 The Knicks, winners of four straight, more or less control their destiny to avoid the play-in tournament and make the playoffs. Despite being on the verge of the postseason, Tom Thibodeau is taking it slow.

NEW ORLEANS — The logical conclusion to make when a team facing Zion Williamson doesn’t have their two best centers is that Williamson is going to feast so much that his New Orleans Pelicans will have an easy route to victory. The New York Knicks slammed the door on that notion, winning 116-106, improving their record to 29-27, and extending their winning streak to a season-high four games.

Nerlens Noel, who has been Mitchell Robinson’s replacement as he heals from another injury, was a last-second scratch, forcing the Knicks to start Taj Gibson for just the second time this season. The timing couldn’t have been worse for New York to be without two of the NBA’s stoutest shot-blockers.

Williamson, even at the young age of 20, is already a historically dominant force in the paint and on the move towards the hoop. He’s a monster at scoring inside, shooting 13.5 of his 16.6 field goals per game inside the restricted arc. He converts 9.1 of those shots per game; no other player in this century has even cracked 8.0 makes per game from that close. Everyone knows he’s going there, and everyone knows he’s going to score.

“When you face players of his caliber, there’s not any one particular thing that you’ll do,” Tom Thibodeau said of Williamson before the game. “But you know that you have to do it collectively and we have to be tight together as a team because of the type of pressure he’ll put on you. And he’s gonna have the ball in his hands [for] a good part of the game, in many ways similar to how Julius handles the ball for us, so that does put additional pressure on you.”

This wasn’t the first time Williamson and Julius Randle were compared to one another, but this comparison is more timely. Both burly, bruising forwards were named first-time All-Stars this season and are leading their squads in neck-and-neck playoff races. To boot, each player’s running mate is a wing from Duke. In terms of play style, Williamson and Randle are far from similar. Built with a frame like William “The Refrigerator” Perry and possessing the nimbleness of Barry Sanders, Williamson has the ability to get wherever he wants on the court whenever he wants.

“We’re gonna have to have our antenna up,” Thibodeau said. “We’re gonna have to be aware that he still has the ability to get in there. And that creates additional problems, so you’re gonna have to do more than one thing and that’s gonna require multiple effort and everyone being able to communicate and read things well.” Although the Knicks didn’t completely shut Williamson down—he scored 25 points on 10-of-19 shooting to go along with eight rebounds and seven assists—they pressured him enough to secure the victory.

Williamson didn’t go a moment without multiple pairs of eyes focused on him when he had the ball. The Knicks sent early help at the nail (the middle of the free throw line) when he had the ball on the wing. Either a guard at the top of the key or a big in the paint would move towards him to clog the paint.

Not exactly help *at the nail* but look how far guys are going to cut off Zion’s lanes https://t.co/gghX7Y4fH1 pic.twitter.com/Kq7V4ZecSa

Thibodeau explained after the game that committing the second defender leaves the rest of the defense in a difficult spot. The constant rotations can expose the offensive boards, which New Orleans collects more than anyone in the league. Williamson, who’s equipped with lightning-fast jumping abilities and Herculean strength, is one of those threats, and he showed why several times.

The Knicks were able to make Williamson give up the ball but they couldn’t truly stop him. They couldn’t keep him off the offensive glass or contain him in transition, hence why they lost the 11-point lead they had in the second quarter and were going blow for blow with the Pelicans until the beginning of the fourth quarter. As the game slowed down and the Knicks got more chances to double team Williamson, they forced him into turning the ball over twice early on in the fourth quarter, which ignited the offense that allowed them to pull away.

Alec Burks provided that fourth-quarter offensive spark, scoring 11 points in the first four minutes of the final period. He ended the night with 21 points and seven rebounds. “He’s always been a big shot maker and he’s got great poise,” Thibodeau said. “The poise under pressure is huge. The game’s not too big. He doesn’t get rattled.” Randle said that Burks’ fearlessness for shooting big shots is very important.

Although seemingly every game alters the Knicks’ playoff seeding, they approach every game with one sole focus: beat the opponent across from them. “We go day-by-day,” Thibodeau said of the approach he brings to the team. “We wanna take care of all the little things. We feel if we do that, the big things will take care of themselves. We want them to be aware—this is their business, too—to understand where we are and what we’re trying to get accomplished.”

“We’re trying to get to what our goal is as a team and we have to do it one game at a time,” said Randle, who tallied 32 points, eight rebounds, five assists, and five three-pointers. “We took care at home, got the first win on the road and we’ll go to Dallas and we need to get another win. It’s that point in the season where every game honestly feels like a playoff game and it has that type of intensity to it. So, just like I said, we’re taking it one game at a time and just trying to take care of business the best we can.”

New York will face the Mavericks on Friday night before returning to Madison Square Garden and squaring up against the Pelicans again on Sunday afternoon. For Thibodeau, Randle, Burks, and the playoff-hopeful Knicks, their focus goes as their schedule does—one game after another, with the goal of the playoffs approaching and within reach.