Tom Thibodeau’s Areas of Improvement for 2022–23 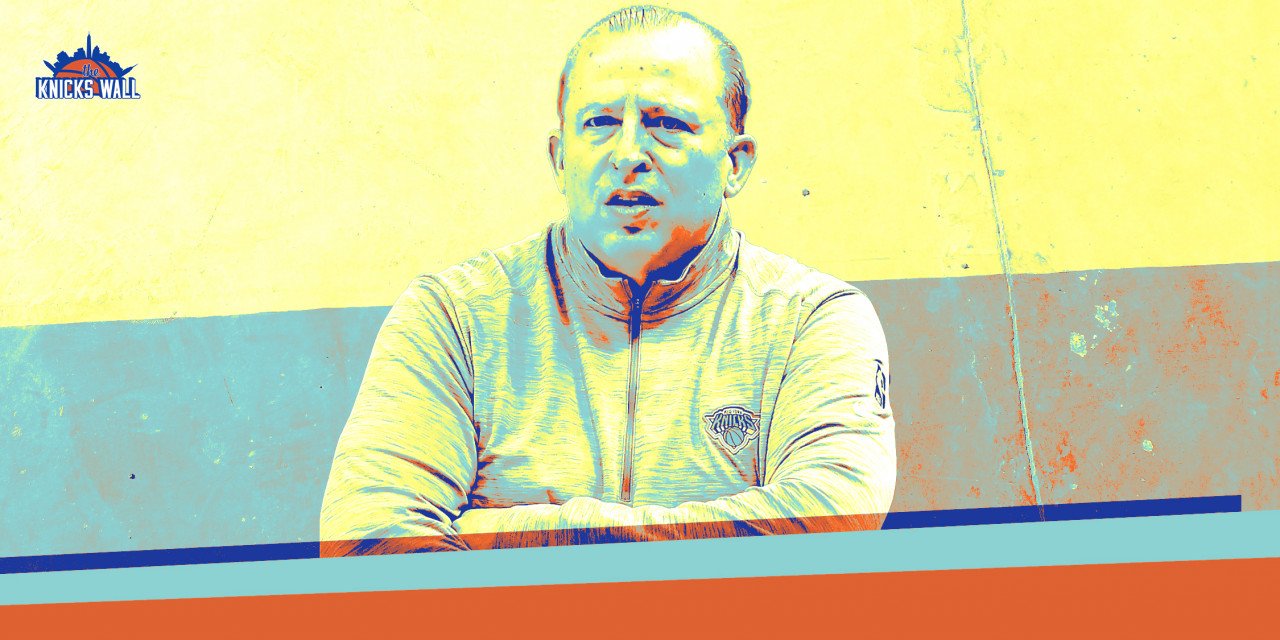 Tom Thibodeau will be sticking around as the Knicks head coach next season. The least he could do is start improving his coaching by making the most obvious adjustments.

Almost to a fault, Tom Thibodeau is a gruff man. There’s his voice, constantly bordering on lost due to incessant shouting from the bench, always coming off guttural and raspy. There’s his scowl, almost always present, somehow even when he’s smiling. And there’s his media presence, perhaps the gruffest of the gruff. He’s stern, matter of fact, almost mean. I imagine his retorts can sometimes make even the most seasoned of reporters feel stupid, though I’m sure he doesn’t mean it.

Somehow, Thibodeau is simultaneously simple and confusing. It’s simple, how he speaks, how he runs straightforward sets. It’s confusing, how he runs his teams into the ground, playing his players more minutes than most other teams would ever think to do; how he seems to go from Coach of the Year-quality schemer to indifferent sideline dweller at every single one of his stops.

Yet he keeps getting retained, his organizations trusting him to again turn things around with one more try—which is exactly what’s happening with the Knicks. Bleacher Report’s Jake Fischer reported last week that “Thibodeau is expected to remain the Knicks’ head coach beyond this 2021–22 season,” despite weeks of speculation that he’d be canned at season’s end.

Fischer also pointed out the painfully obvious: “New York stands 5.5 games outside the play-in tournament following a surprising run to the No. 4 seed in the Eastern Conference playoffs just last spring.” He then quoted a rival team strategist, who said, “That’s the danger of overperforming. You set this expectation.”

Is that expectation an unfair one? Not when you’ve spent 20-plus years in the league, your teams having up-and-down results almost like clockwork. At some point, consistency has to arrive. If it doesn’t that expectation you’ve set becomes your downfall.

Thibs has another chance. What does he need to fix for his New York tenure to last longer than his runs in Chicago and Minnesota? Here are a few ideas.

Rediscover the defensive intensity from 2020–21

Back in January, Thibs was adamant that the Knicks’ defense hasn’t been all that porous this season. At least not nearly as much as the talk might have made it seem.

“I’m more into where we are—are we challenging shots?” he (rhetorically) asked reporters. “Are we keeping the ball out of the paint? And we’ve been top five in points in the paint all year, so it’s something we’ve done well. I think we’re top five in defensive field-goal percentage. Those are the quality markers for me. I look at our defense in totality and to me, the big number is the defensive field goal percentage, that’s my biggest marker and we’ve been third, fourth all year long.”

True. The Knicks are fourth in the league in defensive field goal percentage, keeping their opponents to 44.5% for the season. They’ve also been stout when it comes to defending the paint; 43.1 paint points allowed per game ranks them third in the league, just behind Miami and Boston. Heck, their Defensive Rating, 110.3, is still in the top half of the NBA. It’s not as strong as last season, but it’s certainly solid.

“So much of today’s game is predicated on getting into the paint to spray it out,” Thibodeau continued. “And so, you keep the ball out of the paint, then your closeouts are a lot shorter. The drives are flatter. And it helps you. Your closeouts, instead of being four or five steps are two steps. That’s a big difference.”

But it’s Thibs’ final point that has been lacking in comparison to last season. Despite closing out effectively, the Knicks are 11th in the league at defending the three, allowing opponents to shoot 34.3% from deep. They were the best in the league last season in that department; anything outside of the top 10 is a bit of a disappointment.

And in transition, the Knicks have been quite susceptible to giving up easy buckets. They rank eighth-worst in transition defense this season, per Cleaning the Glass.

The Knicks have the personnel to get back to that sort of dominance. It’s all a matter of execution from here on out.

Things feel tired in New York—not just because it’s the city that never sleeps. Frankly, the Knicks offense has been napping a bit too much. Aside from RJ Barrett, who’s having the best season of his young career, the occasional outburst from a Mitchell Robinson, and every minute Obi Toppin ever plays, things feel stale. Julius Randle’s 2020–21 campaign feels more and more like a flash in the pan with every passing game. The Evan Fournier signing has failed to inspire confidence since it happened. In short, the offense could use a bit of an overhaul.

Now, obviously, this isn’t on Thibs. He’s not in the front office making calls to free agents nor to opposing decision-makers. But if the Knicks are going to keep Thibodeau on, they have to adapt to his system. That means adding players with high stamina, high defensive activity, and an ability to battle for points. It can work, but in another sense, that’s the problem with Thibs’ coaching style: it can work, but it isn’t foolproof. You either play it to perfection, or you enjoy a cushy spot on the bench. Not many players can do it; very few players currently on the Knicks have done it even once.

The Knicks are scoring 106 points per game this season, the fourth-fewest in the league. They need to add players who can go get a bucket when necessary, and those that can actually play two-way basketball. On-ball defenders are nice, but when they can’t score, it’s a recipe for disaster. Vice versa, too—you can’t bring in Kemba Walker and Fournier and expect to hold off opponents that are capable of scoring at will.

It isn’t an easy ask. But if you can give Thibs the right players, he can build something consistent. It’s hardly rocket science.

Shore up the rotation

This one is non-negotiable. If Thibs can’t commit to his guys at some point in the season, then New York can’t commit to him long-term. This season, what he’s done more than ever before is commit to his “best” players, not the players who are playing the best. For too long, he matched Robinson and Nerlens Noel’s minutes. He plays Taj Gibson more often than Toppin. New York traded for Cam Reddish, and he was swiftly relegated to the end of the bench. There’s no rhyme or reason to how, when, or why he plays his young players. More often than not, he just balks at chances to play them at all.

The Knicks will be stuck in limbo for the next few years if they fail to even attempt to learn what they have in their youth, but Thibs doesn’t seem too interested in committing to their development. There’s almost no chance that New York makes the play-in tournament, but its coach seems intent on riding his starters instead of his rookies. Sure, RJ Barrett should play more than Miles McBride. But should McBride be seeing fewer than three minutes of time, literally ever?

“We’ll see,’’ Thibodeau recently said of McBride. “I love what ‘Deuce’ has done. We’ll try to figure out how to work that out. He’ll probably be going back and forth. He’s done a really good job. We’ll see how this unfolds.”

Sorry, but what? Are those even sentences? What exactly does this tell anyone about the team’s plans with McBride, or its youth at large? It’s as noncommittal a statement as it can get, and it could be applied to Quentin Grimes, Toppin, Jericho Sims, or any young Knick you typically see wearing a warm-up.

Either these changes come to fruition, or it’s time to insert someone who will make them. One exciting year isn’t enough in New York. Especially now that it already feels so far in the rearview.