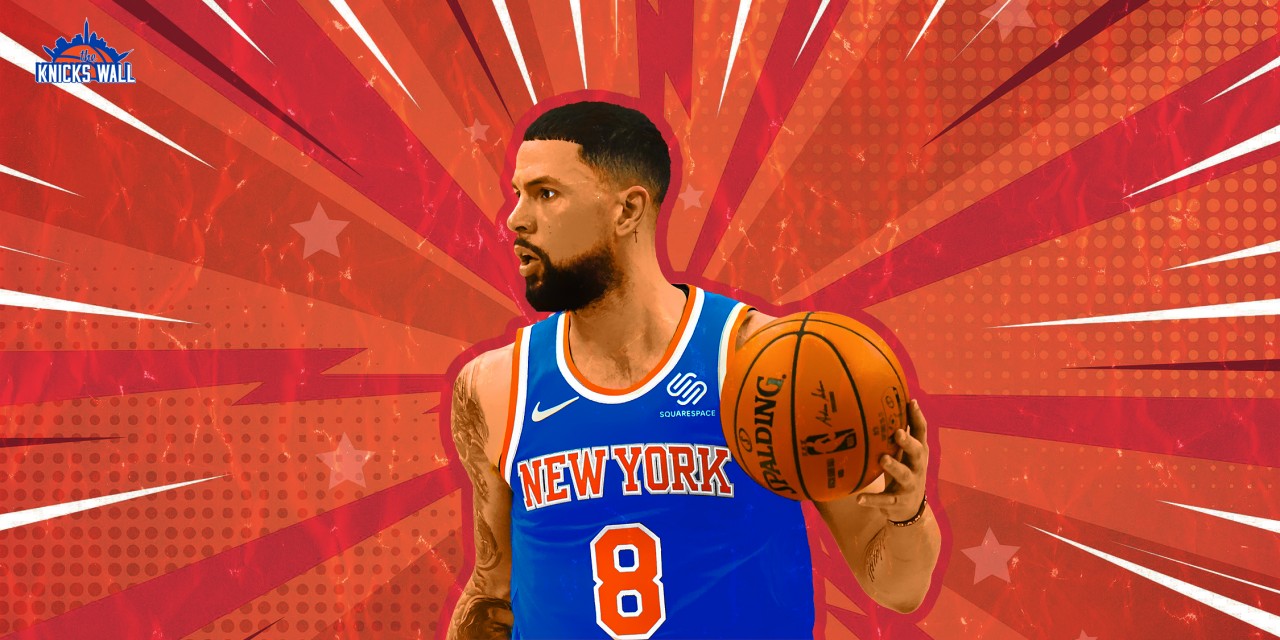 Elfrid Payton has hurt the Knicks’ starting lineup with a lack of shooting. Austin Rivers’ presence could help change that for Tom Thibodeau.

Although it’s not surprising, the New York Knicks are sputtering at the moment. After a 5-3 start to the first eight games of the season, the Knicks are losers of four straight, with three of the four by double digits. After ignoring some of the initial trends created under head coach Tom Thibodeau, his propensity to play his top players upward of 38 minutes, shorten the rotation to seven players, and a lack of outside shooting are becoming bigger concerns in the grand scheme of things.

It’s early to hit the panic button on the entire situation, but it’s not too early to ask for a reevaluation, based on certain trends. The constant struggles on offense in the first half of games, lackluster defense on the perimeter, and proper usage once the rotation gets healthy could all use some change as we enter the next few stretches of the season. For me, the conversation starts with the current starting point guard: Elfrid Payton.

He hasn’t been the worst player in the world—slightly better than his 2019–20 season. So far, Payton is averaging 13.9 points, 4.4 rebounds, and 4.5 assists. Per Cleaning the Glass, he’s sporting a +3.2 efficiency differential, while shooting a career-high 33.3% on 3.6 attempts per game. When you combine a strong start and his synergy with the team’s best player in Julius Randle, it’s easy to think he’s been fine to start the season. However, there are bigger concerns.

It begins with Payton’s defensive impact, which has been overstated for quite some time now. So far this season, Payton has a -1.1 defensive box plus and a -4.8 per 100 possessions, via Basketball-Reference. NBA.com’s advanced stats data has the Knicks being five points better on defense (110.5 Defensive Rating on, 105.6 off the floor) with Payton off the floor. In short, the defensive point guard lauded for his days in college and his early career in Orlando is gone.

His fit alongside the rest of the starting lineup is the larger question. With Randle operating as the offensive fulcrum and R.J. Barrett and Mitchell Robinson serving as the young core, those are three players of various skills—none of which is shooting. To fully optimize those three players, the remaining two starting spots should be filled with guys who can space the floor. Even with Payton having a career year from downtown, there are better options to optimize the lineup.

Why Austin Rivers Is One Solution

One swap to consider: Austin Rivers in the starting lineup in place of Payton.

For at least the 2020–21 season, the Knicks will fail to ever have proper spacing. Their top three players—Randle, Robinson, and Barrett—are all poor shooters, who average upwards of 30 minutes a game. Thibodeau’s offensive mindset and the scheme also fail to do New York any favors, as the Knicks rank 29th in three-point frequency and 30th in three-point attempts per game, per NBA.com. The current starting lineup, usually Payton, Barrett, Randle, Robinson, and Reggie Bullock as the lone shooter, just doesn’t offer enough stretch to be considered a threat.

What does subbing in for Rivers for Payton do? In eight games this season, Rivers is shooting 44.4% from three on 5.6 attempts. While he can’t run the offense the way Payton offers, Rivers is averaging 2.8 assists per game with a 1.83 assist-to-turnover performance so far. The thinking here is: sacrifice the “lead guard” role from Payton and opt for another shooter and secondary ball-mover in Rivers, with the hope that a more open floor could lead to better looks.

too little, too late but happy to see Austin Rivers hit a shot pic.twitter.com/FXVUP0D0bI

Specifically, Rivers offers a better catch-and-shoot threat than Payton. Per NBA.com, Rivers is shooting 43.3% on 3.8 catch-and-shoot threes per game. Combine that with Bullock (currently 33.3% on a team-high 4.2 attempts) and you offer a bit more stretch on the floor. Those two shooters—with Randle operating on the floor and Barrett running pick-and-roll and looking for open shooters with the Robinson lob as a safety valve—make sense on paper.

If the Knicks want to consider more moves, one could be Bullock out for Kevin Knox. After two nondescript seasons in a Knick uniform, Knox is coming into his own, and one area that stands out is his catch-and-shoot abilities. This season, Knox has shot 42.6% on 3.9 three-point attempts and looks active, not great, on defense. If the Knicks want to reward a player who has had a successful start to the season, giving Knox more minutes wouldn’t be the worst move in the world.

In an effort to get New York out of its offensive rut, the best attempt could be a lineup of Rivers, Barrett, Knox, Randle, and Robinson—maybe even the starting lineup for a game or two. The thinking there is two high-level guys on the catch-and-shoot, two ramparting players in Randle and Barrett, and a rim-running big in Robinson, who can catch lobs and anchor the team’s defense. The defense is a concern, but the offense could be potent.

As for Payton, it’s a demotion based on the needs of the team. That said, there is some value for him in the second unit, where the offense becomes a disaster at times. Swapping Rivers for Payton gives the second unit someone who can carry and create better shots for rookies Immanuel Quickley and Obi Toppin, both of which could use some help getting better shots. Throw in Alec Burks, and you supply Payton with three shooters around him.

The New York Knicks have several positives in their first 11 games of the season, but after this recent four-game slide, perhaps a reevaluation is in order. Despite his reputation as a “lead guard,” Elfrid Payton isn’t an ideal fit alongside New York’s starting lineup due to lack of shooting. A simple flip of Payton and Austin Rivers gives the starting lineup another shooter with a bit more offensive creation while giving the second unit someone to help create shots.

To stop the sputtering, it’s worth a look for Thibodeau and his coaching staff to consider a change, just to see if that can get them back in the right direction.