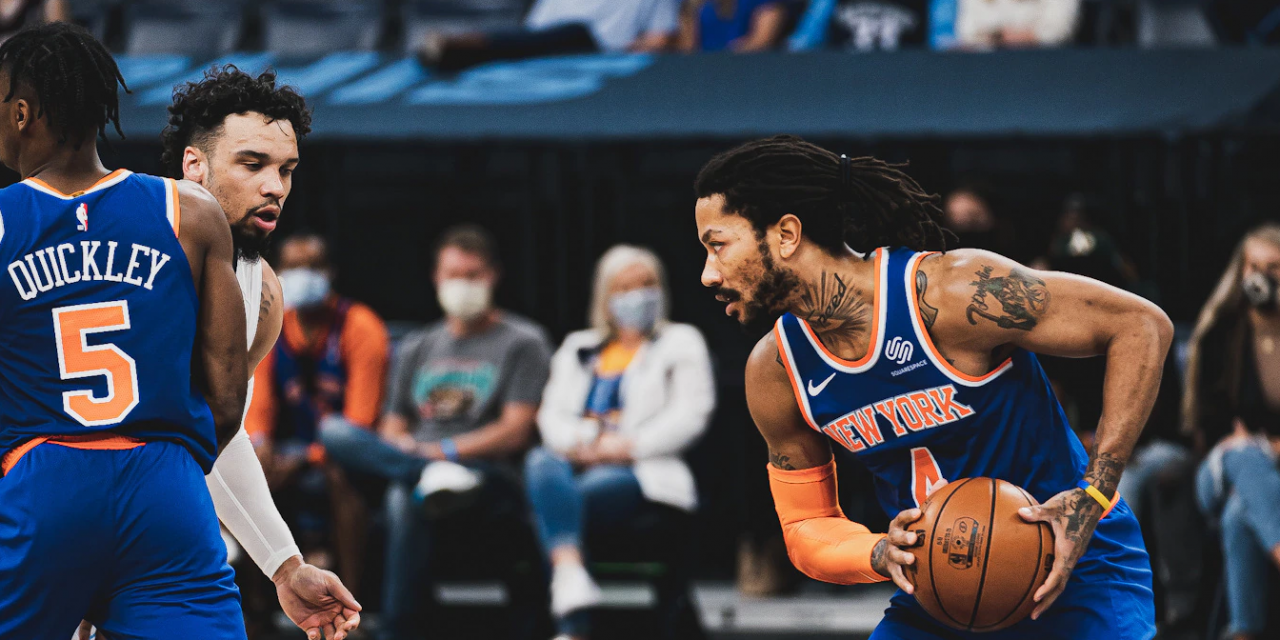 After losing Nerlens Noel and Alec Burks, Tom Thibodeau praised the team effort, catapulted by Derrick Rose in the Knicks’ 118-104 win over the Grizzlies.


MEMPHIS, Tenn. — With Nerlens Noel out due to a sprained left ankle, the New York Knicks found themselves in Memphis shorthanded as they attempted to move to 2-0 on their current six-game road trip. Slotting in Taj Gibson at the center position and handing the ball off to Derrick Rose proved to be the key as the Knicks took care of business in a 118-104 victory over a scrappy Grizzlies squad.

Rose finished with 25 points and 3-of-5 shooting from the outside off the bench. He was pushed back into duty during his normal substitution pattern as Alec Burks, back in his first game back from being sidelined due to health and safety protocols, was injured and couldn’t return. With his rotation cut short, Knicks head coach Tom Thibodeau leaned on Rose and it worked as the former University of Memphis guard carried the Knicks to victory.

The former NBA MVP, who struggled in the first half, found success in his second stint as he saw Memphis’ defense change towards him.

Alongside Rose, Julius Randle said the team “continues to get better” during their solid run, finishing with a team-high 28 points, six rebounds, and six assists. R.J. Barrett finished with 15 points, seven rebounds, and three assists while the Knicks as a team shot 50.6% from the field and 51.9% from the perimeter.

After the game, Thibodeau praised the point guard for his play but made sure to emphasize that this win was much like any other win this season—a total team effort on offense.

“I think he (Rose) is a big part of it,” Thibodeau said. “But I also think you have to give credit to the other guys. I think R.J. off the dribble, Quick (Immanuel Quickley) off the dribble, and then the willingness to make the extra pass by everyone to pass up a good shot to get a great shot. The understanding what your reads are and I think the team deserves credit.”

The Knicks travel to Denver to face Nikola Jokic and the Nuggets on Wednesday. Jokic, viewed by many as the MVP front-runner, will be a test for the Knicks’ front line, especially with Noel’s outstanding uncertain status.

Still, Gibson, who finished with six points, 12 rebounds, and five blocks in Noel’s stead, believes the Knicks have to “tighten up” against someone as talented as Jokic. When the conversation shifted to the MVP award and Julius Randle’s place among the top contenders, Gibson made sure to emphasize Randle’s position as a top candidate.

“He belongs at the top,” Gibson said. “You look at the body of work that he’s been putting together on a night-to-night basis, real professional, growing every night, especially in a tough market, people understand how tough it is to play in New York and he’s getting his credit. I’m saying this right now, Julius Randle deserves credit.”

As for Randle, the former Kentucky Wildcat not only believes he’s amongst the top candidates for the award, but he also threw another name into the mix.

“For sure,” Randle said confidently. “I’m not going to shy away from it. For me, it’s about improving game to game and getting better as a player. Even though I’m not focused on it. The praise obviously is great, but the goal is continuing to lead the team [from] game to game because, as I said before, we continue to get better game to game. I think (Phoenix Suns guard) Chris Paul is up there.”

Staying away from Randle’s MVP candidacy, Thibodeau reiterated that, among the many things he’s proud of, it’s that the players continue to work and win as a team.

“The one thing I’m most proud of is as a team, these guys are playing for each other and seeing the quality of our two-point shots,” Thibodeau said. “They’re not bad shots … all good shots, usually they’re shots that are coming from a teammate making a play for somebody or somebody making an extra pass. It allows us to get a good shot, a second shot, and set our defense. I want them to put the team first. I want them to put winning first. And that’s the only way to win.”

The Knicks travel to Denver on Wednesday, May 5th. Tip-off is set for 9 p.m. ET.