Tom Thibodeau Should Not Be Considered for Knicks Head Coach 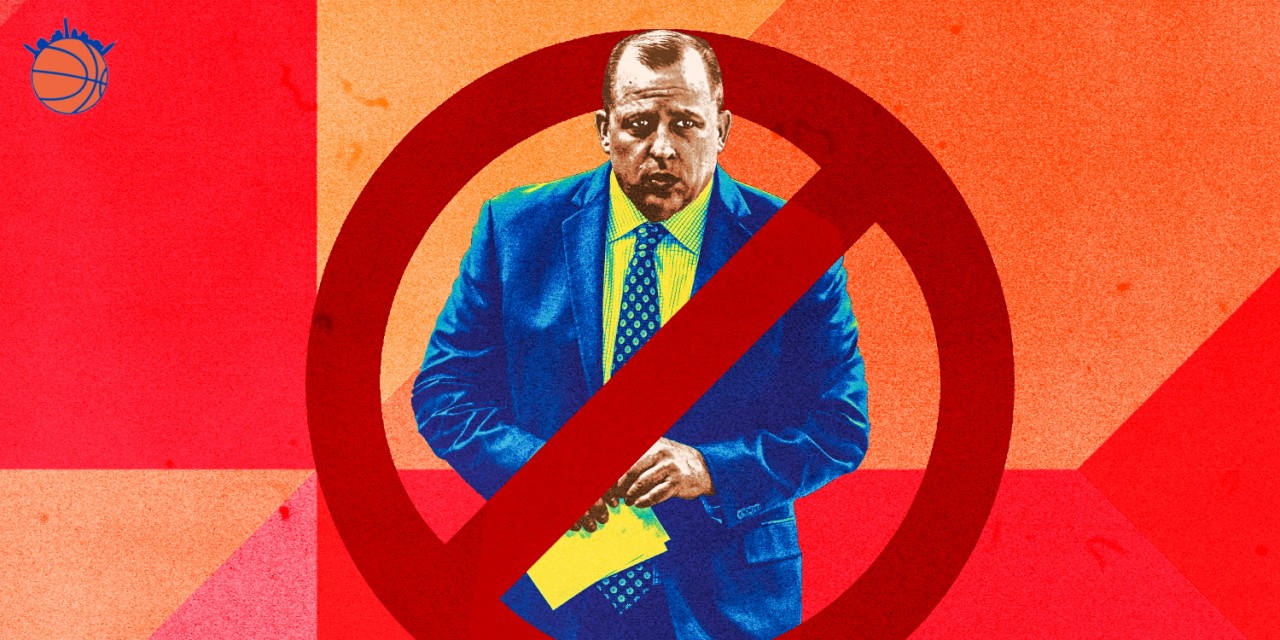 Tom Thibodeau has been linked in recent weeks to the open Knicks head coach job due to his ties to the franchise and new president Leon Rose.

The New York Knicks are the embodiment of one step forward, three steps back.

All of New York danced in the streets when Steve Mills was fired on February 4th, but with the Knicks, no party lasts too long. A week later, another Steve was there to ruin Knicks fans’ lives. For some reason, Steve Stoute, the Knicks’ new brand consultant, decided to speak on front office personnel decisions with Max Kellerman and Stephen A. Smith on First Take. Stoute was not prepared for this interview. It was a hard watch throughout but the most inflammatory section of the whole debacle was when Stoute argued that a coach should be the face for the media and agreed that Mark Jackson would have no problem accomplishing that feat.

Mike Miller, who has won 13 of his 33 games as head coach of the Knicks, did not deserve to be talked about as if he is already a figure of the past from a guy who has zero NBA front office experience. Miller is only seven wins away from tying David Fizdale’s win total despite the former coach notching 71 more games during his Knicks tenure. In the days following Stoute’s ESPN appearance, multiple reports came out about how New York is looking at three main targets for their head coaching gig: Jeff Van Gundy, Mark Jackson, and Tom Thibodeau. Jackson and Van Gundy are New York legends who are brought up ad nauseam every time the the Knicks’ head coaching spot opens up (which is every year and a half). The new candidate, Thibodeau, is a former Coach of the Year and assistant under Van Gundy’s Knicks.

While Thibodeau had some excellent years in Chicago, his reluctance to mold his game to the league’s changes has kept his teams from becoming great, which is why hiring Thibodeau would be the most Knicks move possible.

Failure to Adapt and Develop

When Tom Thibodeau was brought on as president and head coach to the up-and-coming Minnesota Timberwolves, the hiring was seen as a huge win and perhaps one of the most important moments in Minnesota history: when the only team that has lost more than the Knicks in the 21st century started to become relevant. Thibodeau’s first season with the Wolves went poorly, but the team’s best two players were 21-year-olds.

So before the 2017–18 season, the front office finally got the team that the former Bulls coach really wanted. Zach LaVine, Ricky Rubio, and Kris Dunn were replaced with Jimmy Butler, Jeff Teague, and Taj Gibson. With two All-Stars, two number-one draft picks, and decent role players, the Timberwolves were expecting greatness. They preceded to make the playoffs by only one game.

When watching their offense, it was easy to see where the potential future super team fell short:

This play personifies Thibs’ influence over the hopeful Timberwolves. In 2017–18, despite losing their worst shooter in the starting lineup and having arguably the greatest high-volume three-point shooting center in league history, the no-longer-young Wolves shot the fewest threes per game in the entire league. Most of the shots at the Target Center came from between 3-30 feet from the rim, a.k.a. the least efficient shots on the court. Instead of pushing the ball in transition because you have three incredible athletes or spreading the floor with Karl-Anthony Towns, Thibodeau elected to have the team run the offense like henchmen in an action movie, attacking one after the other, instead of together.

The goal of the current Knicks roster is the same as that Minnesota team: develop the young players into a playoff core. So, how did Thibodeau do developing Minnesota’s young talent? Towns showed that he was a clear superstar during his rookie year but failed to develop that defensive talent that he showcased at Kentucky despite Thibodeau being a defensive guru. Backcourt teammates Kris Dunn and Zach Lavine were traded away by Thibs. So that left Andrew Wiggins, the no. 1 pick who has always been described as an elite athlete in a slacker’s body.

Somehow Wiggins only got worse under Thibodeau’s tutelage. The 2017–18 and 2018–19 seasons are the only campaigns where Wiggins averaged fewer than 20.0 points-per-game (outside his rookie year). Usually, when scorers have a down year in point totals, they increase their efficiency, but the former Jayhawk posted his two worst True Shooting percentages those same years (even worse than his rookie year). Scoring isn’t everything … but it is when you’re Wiggins. Despite playing the third most minutes in the entire league, Wiggins never averaged over five rebounds or three assists while Thibodeau was the head coach.

That Timberwolves team had all the talent in the world but needed a good coach to get the best of them in order to succeed. A good coach pushes a team to play beyond the sum of its parts. Look at what Erik Spoelstra has been able to create from an All-Star center and Jimmy Butler. The Heat are viewed as the potential survivor in the East over the reigning champs, the best team in the league, and the All-Star Sixers. The Butler Timberwolves were seen as a road for any other Western Conference playoff team to just drive over.

Tom Thibodeau will not only be infamous in Minnesota for his poor coaching: he will also be remembered for dismantling the Timberwolves’ roster. Yearning for a star, the president-coach decided to take one from his old team. The Wolves traded Zach LaVine and a draft pick that would yield Lauri Markkanen for Jimmy Butler. LaVine is averaging over 25 points per game while the other scores with better efficiency than Kristaps Porzingis. They are both doing this on the Chicago Bulls while Butler now plays in Miami. LaVine would have fit well next to Jimmy Butler, but Thibodeau decided to keep Wiggins, the worst player out of all four mentioned in this paragraph.

There’s another glaring reason why Wiggins and Towns performed worse during the 2017–18 season—they lost their point guard. While Ricky Rubio is no All-Star, look at how much better he can make the players around him: Devin Booker is now an All-Star replacement and Deandre Ayton averages 18 points-per-game as a 21-year-old. Rubio was replaced with the flashier-but-selfish Jeff Teague, whose decline was obvious to everyone besides him and his new coach. Towns, the clear number-one offensive option, would have multiple games with 10 or fewer shot attempts and Wiggins grew even more reluctant to pass because he knew the other guard would not be giving the ball back.

Tom Thibodeau failed to see the faults on that young Minnesota team and ruined their growth as a franchise because of it. The Timberwolves are worse off now because they made the wrong decision while their best players were still college-aged. Who knows what that team with three 21-year-old potential All-Stars could have become if someone more competent was in charge? What can Mitchell Robinson and R.J. Barrett become under an actual coach instead of another washed-up hack? New York fans deserve to know.