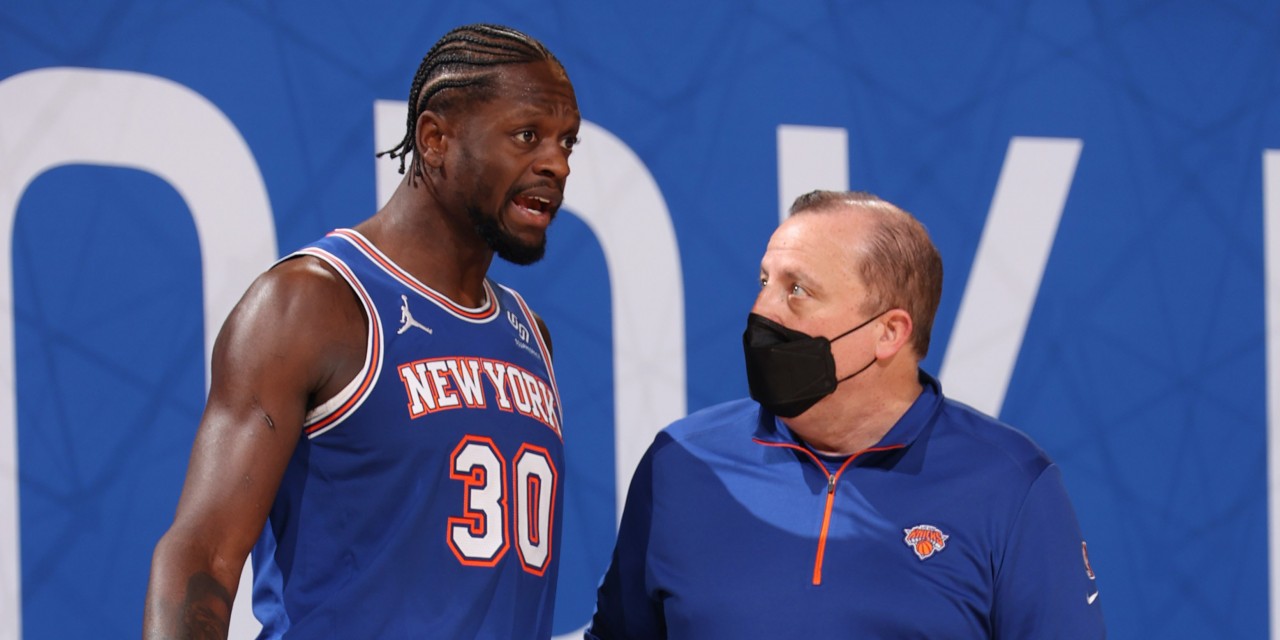 HOUSTON, TX — This past year has been filled with plenty of surprises.

Some good, some bad, but the revamped New York Knicks has to be one of the bigger ones around. At the center of it all is a new-and-improved Julius Randle, who leads the Knicks in almost every major statistical category. He averages a team-high 24.2 points, 10.3 rebounds, and 5.9 assists.

Even in the last few weeks of the regular season, head coach Tom Thibodeau is still processing Randle’s career year.

“I thought he would have a good year, but I didn’t see this level,” Thibodeau said.

The changes in his game and overall upgraded play are apparent, but it’s still remarkable. He earned his first-ever All-Star appearance this year, but Thibodeau started to have an inkling that Randle would make a big leap forward during the offseason.

“Obviously, the big thing was the three,” Thibodeau said of Randle’s improved three-point shot. “It stood out right away during the summer, but you’re in the gym when there’s no defenders. It looked a lot better coming off his hand, the arc was better, and he looked real comfortable with it.”

Randle is shooting a career-best 42.2% from beyond the arc. He’s become confident from long range that last season’s meager 27.7% clip seems like eons ago.

His improved success from deep seems to also have trickled down to the rest of his teammates. The Knicks are shooting 38.7% from the three-point line as a unit, the fifth-highest percentage in the NBA. In the four previous seasons, they were among the bottom five in the league.

“That was a big concern, the three-point shooting for our team,” Thibodeau said. “Not only for Julius, but that was huge for him and our team. All the other guys put in the extra time as well. Julius set the tone for that. You see him work on it every day. He’s in early, he stays late. He comes back at night, and we have a number of guys that do that. If you put the time into it, usually you’ll get a good result.”

Julius Randle also added: "It's a family atmosphere, so I enjoy it every day, personally." https://t.co/FDXnQuIUsf

The first-year coach is proud of Randle’s growth.

“To say if I thought he could be at an All-NBA player, I never put a lid on a player, but the way he’s played in every aspect of the game,” Thibodeau said. “Putting it on the floor, in the post—we always knew he excelled at that, but the playmaking, shooting the three, defensive effort, and all those things. He’s just had an impact on winning, which obviously is the most important thing, so they’re not empty stats. They’re stats that are meaningful.”