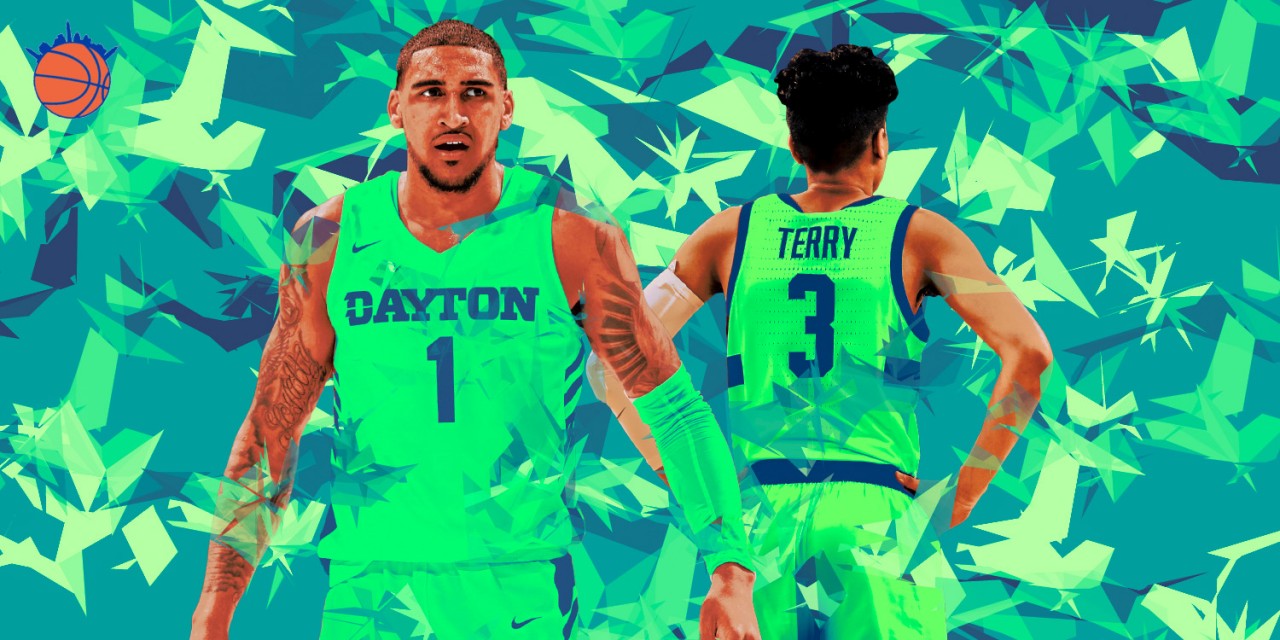 The Knicks are in a difficult spot, barring any NBA draft day trades, and will likely see themselves pass on really good prospects like these.

Saying goodbye is never easy, especially when you never got to properly say hello.

The expansion of NBA Draft season has made it easier to fall prisoner of the moment with certain prospects. With nothing to go off other than YouTube binges, Mike Schmitz’s fantastic prospect film studies, and Twitter clips, it’s easy to fall in love. Last year I compared scouting a prospect solely through media is akin to falling in love over Instagram; some of the love could be legitimate and some of it could simply be the framing in which it’s presented.

It is even easier to fantasy book a prospect’s fit with your favorite team. In the end, we all do this with whomever our team drafts, but normally the sample size is larger. In normal times the NCAA tournament helped vet the real talent from the players who have a talent for making a good highlight.

I don’t have to tell you these are not normal times. What I will tell you is this unabridged version of draft season has allowed us to get into the weeds with the 2020 NBA Draft class. In addition to proving that the statement “this is a weak draft class” is talking head jargon, these past few months have proven there is legitimate talent all throughout this class.

Given their current draft position—middle of lottery and end of first round—the Knicks will likely pass on a player you feel could be a great add. This phenomenon of “falling” for a prospect isn’t new, but as I said, this draft season has given us more time to fall hard—and I’m no exception.

There are a few players I have no doubt could be a positive force in turning the Knicks around, but there are three guys in particular I will have a tough time seeing in another team’s threads.

What better place to start than the inspiration behind this piece. Every year there is a certain player or players that fit the MSG crowd. What I mean by that is their aesthetically pleasing playing style lends itself to making the building shake. Some of these players have proven to have that ability elsewhere (Zion Williamson, Trae Young, Luka Doncic) and others have missed the mark (Dennis Smith Jr., Malik Monk).

I’m not sure which of these two groups Tyrell Terry will fall into, but he sure as hell gives off heavy Trae Young vibes. Terry is a descendant of the Young, Stephen Curry lineage: a crafty point guard with the equal capability to thread the needle and pull up from 30 feet.

Terry had a solid season for Stanford, but nothing that screams draft night steal. He is unquestionably good at shooting from deep, shooting an impressive 40.8%. Admittedly, I have not seen nearly enough of Terry to explain how he averaged only 14.6 points per game—but this is the kind of stuff that can make a point guard starving team salivate.

He makes it look so easy from beyond the arc with good footwork + a beautiful release.
Should he stay in, I can't wait to see where he lands in the Draft.@tyterry05 pic.twitter.com/XgGOsYY7bg

What Terry ultimately amounts to depends on what would be asked of him.

In New York I envision him as a spark plug off the bench and occasional spot-starter, similar to the way Toney Douglas should have been used, only Terry has proven he is a better passer than his 3.2 assists average suggests.

Tyrell Terry has put on a passing clinic in the second half here. Gorgeous entry pass here, leading Da Silva to the open space, but an excellent recovery by Agbaji thwarts the basket: pic.twitter.com/O1FfzvBSck

Awesome vision from Tyrell Terry to see this outlet pass and throw it right on the money pic.twitter.com/XH3KrWTFco

His skill set fills every possible need that has plagued Knicks point guards since I drew breath: he can pass, shoot, dribble, and even has a nose for the ball.

Awesome, awesome anticipation by Tyrell Terry to jump the Okongwu pass out of the double pic.twitter.com/KUnijogPxR

Terry’s clips are so enticing that I have settled on two draft-night scenarios: the first would be drafting Killian Hayes or LaMelo Ball in the lottery and TCU’s Desmond Bane with the Clippers pick. The other is taking Deni Avdija in the lottery and nabbing Terry with the second pick. The problem with the latter option is Terry will likely be gone by the early 20’s at the latest.

Most teams should have Terry pegged as a high-end bench player, some maybe even higher than that. With a smooth jumper like his, it’s hard not to buy into him being an effective pro; but as TKW’s Eli Cohen said, he has room for improvement as a floor general and defending one-on-one.

The good news is the Knicks have the pieces that could mask Terry’s shortcomings and amplify his strengths. Playing alongside Frank Ntilikina, for example, Terry would have my full confidence to take over the backup point-guard role. The same goes for R.J. Barrett or Damyean Dotson. This is why when Terry inevitably goes in the 20’s I will scream in frustration.

Saddiq Bey sat atop the TKW Draft Board its full duration, and I’m still not ready to grasp the reality he will not be a Knick. Out of the three players here I feel confident saying that. The reasons are the same for why I wanted Bey in NYC: he is a modern 3-and-D wing that every team needs to survive.

Returning to Villanova for a sophomore season made Bey quite a bit of money as he shot up NBA draft boards, thanks to a fantastic  sophomore season that culminated with him winning the Julius Erving Award, given to the top small forward in the country. Bey shot a scorching 45.1% from three-point land. A team continuously starving for three-point shooting like the Knicks (who finished 27th in the league in that category at 33.7%) look at a smooth shooter like Bey as an oasis.

Bey has garnered Robert Covington comps, which do have validity thanks to his ability to be productive on both sides of the floor, but when I watch him shoot I see a little Buddy Hield in that release.

What makes it so tough to say bye to Bey is you can envision him sliding right into the small forward position and being productive immediately. Bey is exactly the type of shooter that can disseminate a crowded floor and unclog driving lanes for Barrett, Julius Randle, and other drivers. His defense would be an added bonus.

Sadly, Bey’s meteoric rise up the draft boards has continued since the final edition of the TKW Draft Board. He is now firmly a fringe lottery/middle of the first-round pick, putting him out of the Knicks’ range barring a trade of some sort.

The Knicks can address shooting at 27th overall or in the second round, but with Bey there was a chance to kill two weaknesses with one pick.

Who doesn’t love a good homecoming? Out of the three players, Brooklyn native Obi Toppin is the only one well within the Knicks’ range, although he does not necessarily fill a glaring need. Sure the Knicks are not at a place where they place fit over the best player available, but adding another power forward with gaping holes at guard and small forward would not be the best use of a lottery pick.

Toppin was the best player in college, which sadly got swept under the rug this year given the general disinterest in the 2020 NBA Draft and no March Madness. For those of you who missed his final season at Dayton, you missed out on some electric highlights.

I don’t think I have to expand on the type of frenzy the Garden would break into if Toppin did this mid-game. Highlight reel dunks aside, Toppin was uber-efficient for Dayton averaging 20.0 points per game on 63.3% shooting, including an impressive 39.0% from three and respectable 70.2% from the free throw line.

Toppin’s pro outlook hinges on his ability to shoot the basketball, and as TKW’s Nick Carannante mentioned in his Toppin profile, his strong shot selection can prevent a Josh Smith 2.0 scenario from happening and compared Toppin’s potential fit in New York with Amar’e Stoudemire. I have to admit that got the juices flowing, and it isn’t an outlandish claim in the least bit.

Similar to Stoudemire, Toppin has explosive dunks and a framework to develop a reliable jumper. STAT came to NYC a finished product and, while some complain about Obi being “old” at 22 years old, I choose to look at it a different way. Toppin already has the foundation to be a productive NBA player and could have him under contract as he hits his peak seasons (traditionally, NBA players are said to peak somewhere around 27 years old).

In a theoretically utopia world, Toppin will be on a cheap deal right as the Knicks start to resemble a good basketball team. His playing style allows him to thrive in just about any situation, particularly next to Barrett, Robinson, and Ntilikina, who could mask his only weakness: defense. Toppin would have to prove to be a strong shooter to ensure proper spacing on offense, but the combination of his mechanics and two year’s worth of solid shooting percentages gives me hope he will be average at the worst. Also, the threat of being able to leap over defenders in a single bound can’t hurt.

(Lastly, the marketing ability for Toppin in New York is seismic. Toppin is blessed with a fantastic name that lends itself to countless Star Wars–themed promotions and endless Obi-Wan Toppin references. He also has noticeable swagger on the floor. I can already envision kids on the playground emulating him.)

And honestly, who can blame them? They don’t teach this level of drip.

Obi with the Curry ??? I love so much about this kid pic.twitter.com/Mk4COwf5rn