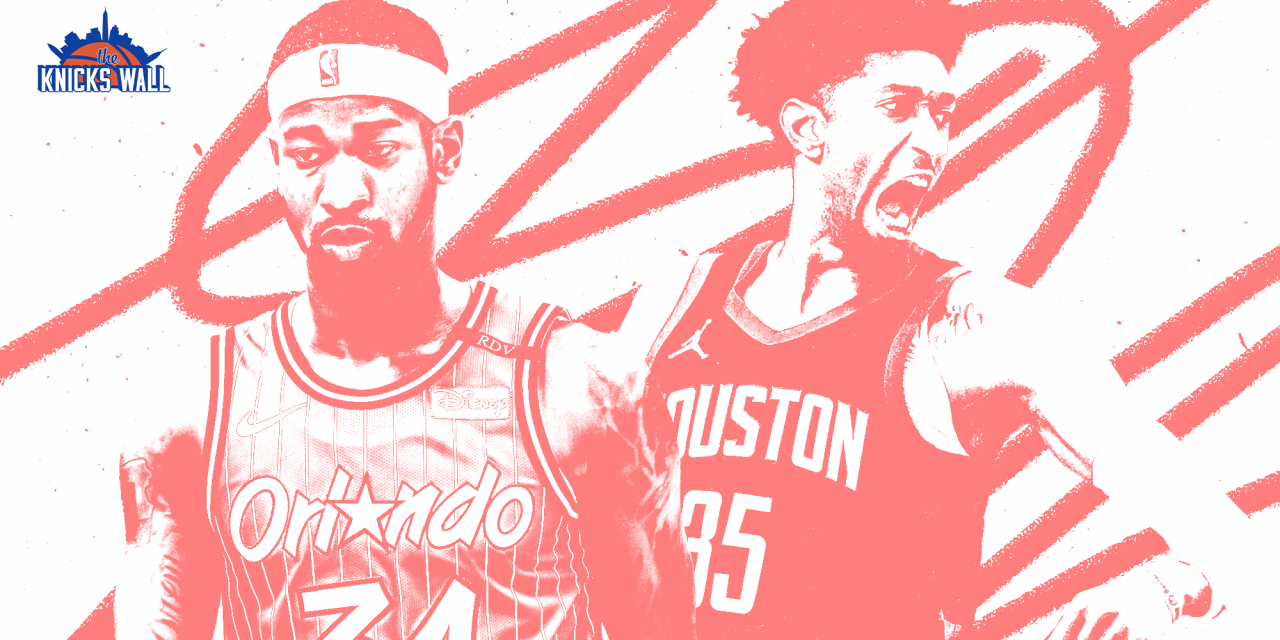 As NBA trade season approaches, here are three targets for the Knicks. None of them are stars but could all have sizable impacts.

The NBA trade deadline is officially less than one month away. It’s now the time of year when fans flock to trade machines while the media speculates which stars will be on the move next. This time around, the big names being discussed include Jerami Grant, Domantas Sabonis, and Ben Simmons. While landing a big name would benefit the Knicks, it would also be a complicated process.

In the spirit of trade season, let’s look at three trade targets New York to look into as they look to find consistency. Keep in mind none of the players discussed are All-Stars, and they’re all with lottery-bound teams. These parameters were set in order to locate practical and realistic targets.

While the Knicks have upped their three-point frequency (and thus lethality) from the season prior, they are struggling immensely to get buckets inside the arc. New York ranks dead-last in the NBA in made two-point field goals per game by a wide margin, making just 24.3 of them. There is an apparent lack of reliable halfcourt creators on this roster—guys who can consistently put pressure on the defense from close(r) range.

Enter Terrence Ross, a 10-year veteran currently playing for the Orlando Magic. The 30-year-old has quietly been a perennial Sixth Man of the Year contender in Orlando, averaging 14.7 points across the last four seasons. More notably, his ability to generate and convert mid-range shots would be a welcomed addition to the two-point-starved offense in New York.

People lie, but numbers don’t, and the numbers paint Ross as nothing short of a mid-range assassin. This type of shot has largely fallen out of favor in the NBA, but a few players—famously Chris Paul and DeMar DeRozan—still utilize the in-between game at a high, efficient rate. Ross is knocking down 46.4% of his short mid-range shot attempts on the season, a mark that ranks in the 84th percentile among wings, per Cleaning the Glass. Duncan Robinson, Pat Connaughton, and Kevin Huerter are the only three wings that have logged as many minutes as Ross and are shooting a better percentage from the short mid-range.

Along with great accuracy, what makes Ross a mid-range master is how often he takes and creates such looks. A sizable 40% of his field-goal attempts have fallen therein (91st percentile in frequency). Statistically speaking, it’s his favorite shot on the floor aside from the long ball. And Ross can let it fly from the in-between area so frequently because of his adeptness in self-creating high-percentage looks for himself. Buoyed by a rock-solid handle, impressive athleticism, and a keen understanding of shot angles and how to create space off the bounce, 48% of Ross’s mid-range makes have been unassisted (57th percentile among wings).

Terrence Ross is such a good shot-maker. This is the third time this game already he's knocked down a pull-up jumper out of the PnR. pic.twitter.com/aeFVZ8x0EK

Not only does Ross make sense on paper, but recent rumblings suggest he is available via trade. NBA Insider Marc Stein discussed 10 players executives believe will be traded by the February 10th deadline and Ross was mentioned. And with a very team-friendly contract with two remaining years worth $34 million, the Knicks should give the Magic a call about their three-level bucket-getter. Ross would instantly be in the running for the best pure scorer on the roster. This notion, coupled with the longevity and affordability of his contract, hints at the idea that Ross could have a long-term home in the Big Apple.

There is a lot of uncertainty surrounding the center spot in New York. After a slow start to the campaign, Mitchell Robinson has played well lately (averaging 12 points and 9.5 rebounds per game over his last two) but will hit restricted free agency this summer.

Nerlens Noel has logged just 17 games thus far, and when he has been healthy, he’s provided little other than shot-blocking. Case in point: he is converting just 56% of his shots at the rim (10th percentile among bigs). Because of Robinson’s pending free agency and Noel’s inability to stay healthy/produce, one or both of New York’s behemoths could very well be on their way out by next month’s deadline. But there’s a potential external solution to the Knicks’ center quagmire—Christian Wood.

Wood possesses a uniquely wide-ranging toolbox for his 6-foot-11 stature. He quite literally has guard skills—but they weren’t there when he first got to the NBA. Instead, Wood worked to hone them over the last few seasons and is now seeing the fruits of his labor with the Houston Rockets.

Firstly, Wood would give New York its first legitimate playmaking center in quite some time. The 26-year-old is putting up career highs in both assists (2.1) and assist percentage (11.7%, 66th percentile among bigs). Additionally, Wood’s 2.1 dimes average is the 15th best for a center in the NBA and higher than notably versatile bigs Robert Williams and Xavier Tillman.

When he has the ball against a wing, the entire defense is focused on him, and he's finally realizing how he can use that to create for others. Great off ball movement as well creates a corner 3 and 3 FTs. pic.twitter.com/wi21mcPb8u

To be clear, Wood is not an earth-shattering distributor—far from it. But he’s comfortable dishing the ball off the bounce, willingly completes the extra pass, and makes simple yet effective reads when the defense collapses in on him. Simply put, he’s a ball mover, and the Knicks —particularly their three-point snipers—would benefit from Wood’s presence and the attention he receives.

Another modern skill that Wood has added to his repertoire is a reliable three-point shot. Across his first four seasons in the league, he never took more than 1.2 triples per contest—he wasn’t a shooter, or so folks thought. Fast forward to the current day, Wood is hoisting 4.7 of them on average. More importantly? He’s making them, not quite at an elite clip, but an above-average one for a big (34%, 58th percentile per Cleaning the Glass).

On the board with a @Chriswood_5 three. 🔥

Wood’s passing chops and capable three-point jumper are unmatched by any positional counterpart on the Knicks roster. In a league chock-full of unicorns, he stands out as one of the best. His floor-spacing and facilitating could help New York’s offensive attack reach new heights.

Die-hard Knicks fans likely recognize this name. Holiday spent one season in New York back in the 2016–17 campaign—he suited up for all 82 contests and averaged a modest 7.7 points for a mediocre 31-51 ‘Bockers squad. Back when Holiday was with the Knicks, he was merely trying to find a spot in the league. It was the first time he had played more than 59 games in a season. Since then, he has bounced around the Association and, along the way, established that he belongs. A Holiday–New York reunion is alluring in a modern NBA where teams can never have too many three-point marksmen.

Holiday fits the definition of a traditional three-point specialist to a tee. An overwhelming 74% of his field-goal attempts this season have come from deep (93rd percentile in frequency). Also, Holiday is almost solely a catch-and-shoot threat from three, as 96% of his three-point makes this season have stemmed from assists, per Cleaning the Glass. But don’t mistake the limited variety with which he hits treys for overall ineffectiveness.

Per NBA.com, of the 586 NBA players listed in the catch-and-shoot points per game metric, Holiday ranks in the upper echelon at 5.7 points, good for the 31st most in basketball. He’s elite in his role.

To put where Holiday stacks up against New York’s three-point shooters into perspective, only Evan Fournier attempts more threes than Holiday (7.0 compared to 6.8). It’s worth noting that Holiday’s current three-point percentage is lower than he’s accustomed to at 35.4%. Still, considering he shot 38.2% and 40.5% the previous two seasons, there’s reason to be optimistic this number will start to rise as he logs more games and the law of averages comes into play.

Holiday has the potential to be a hand-in-glove fit for the Knicks in a Reggie Bullock-type role off the bench—someone who can fire away from deep early and often and contribute to New York’s three-point renaissance. Plus, trading for him wouldn’t break the bank. A package of Kevin Knox and a second-round pick or two should presumably be enough to stir the pot.

»READ: What should the Knicks do with Kevin Knox going forward?