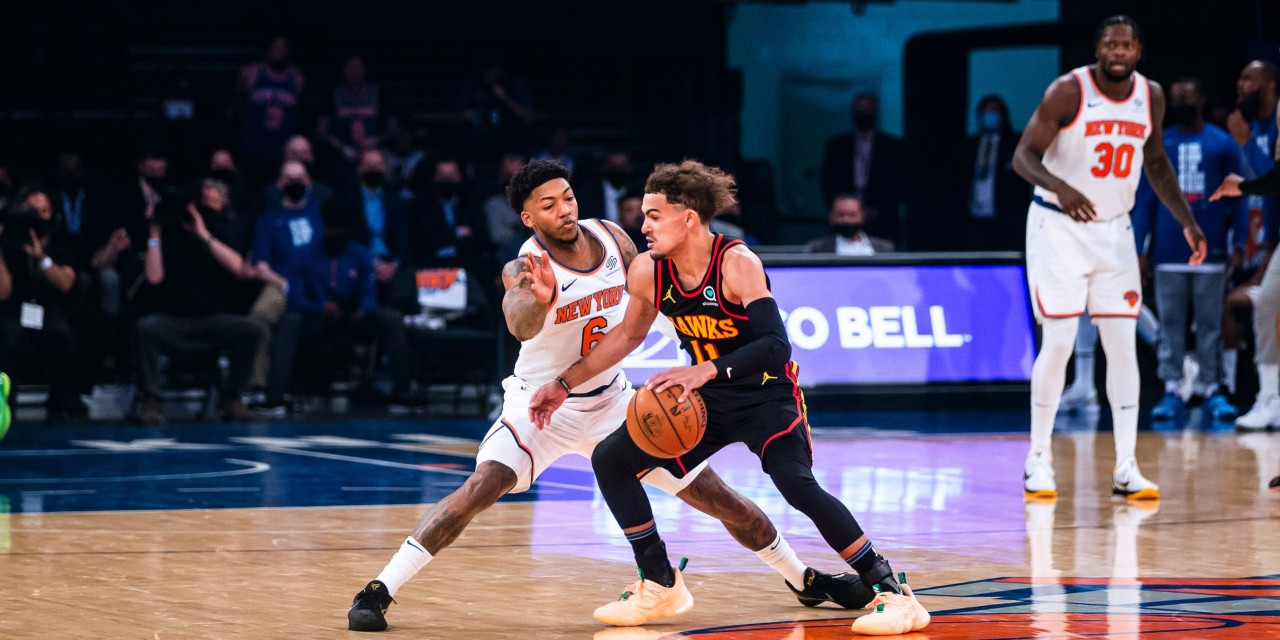 A back-and-forth Game 1 from the Garden saw Trae Young sink a go-ahead shot, with the Hawks winning over the Knicks.

The New York Knicks (0-1) fell heartbreakingly to the Atlanta Hawks (1-0) in the final seconds, 107-105. Hawks superstar Trae Young sealed the deal with a floater with 0.9 seconds left to give Atlanta a two-point lead and the win.

Young, as per usual, led the way for the opponent in the scoring column, dropping 32 points while also adding 10 assists and seven rebounds for good measure. Bogdan Bogdanovic was right behind Young with 18 points and four made threes, and Lou Williams chipped in 13 off the bench.

Conversely, it was the bench that carried the scoring load for New York. Alec Burks and Derrick Rose accounted for 44 Knicks points on 17-for-29 accuracy. No New York starter had more than 15 (Julius Randle).

Crucial rally by the bench to end the first half

From a scoring standpoint, the opening quarter was unkind to the Knicks. While the team has improved leaps-and-bounds shooting the three-ball compared to the year prior, New York’s perimeter woes of yesteryear reared its ugly head. An inexperienced bunch, the Knicks suffered a case of the jitters in the early going—only one of their seven first-quarter threes fell. New York’s top two bucket-getters didn’t fare much better either, as Julius Randle and R.J. Barrett combined for a paltry 3-for-11 clip at the end of one. The Hawks’ defense honed in on the two and threw multiple bodies at them often, particularly Randle. New York mustered just 16 points in the opening salvo, a stretch that they hope to forget soon.

However, the tide turned by the beginning of quarter number two when Tom Thibodeau went deep into his bench unit. The reserve trio of Rose, Immanuel Quickley, and Burks all spearheaded a run that resulted in New York entering halftime within striking distance. Instead of falling into the starter’s pattern and settling for treys, the backup guards/wings of the Knicks played with an inside-out approach on offense, which paid dividends. It started with Rose’s dribble penetration, and once Rose got a couple of layups to go, the Hawks began to clog the painted area. This, in turn, opened up the floor for the likes of Quickley, who hit two deep bombs in the second.

Additionally, Burks was perhaps New York’s best player in the first half. Tallying nine points, three rebounds, and two dimes, he served as a shot of adrenaline, scoring from all three levels and setting up his teammates for point-blank looks. The ‘Bockers cut the Atlanta advantage to two at the break.

In the biggest Knicks game since 2013, the “others” produced and contributed. The bench unit doesn’t get enough credit for how consistently effective they’ve been all year long. New York’s chances at a prolonged playoff run are virtually zero without steady points off the pine.

Before diving into Randle’s subpar postseason debut as a Knick, it’s worth clarifying it was just one game, and he will no make adjustments and bounce back in Game 2. There’s no reason for worry or panic, and Randle will continue to be the straw that stirs the Knicks offense—this strategy is why New York is in the playoffs in the first place.

On almost every touch, Randle saw at least two red and black jerseys. Sometimes three and even four. The Hawks guarded Randle the way it was assumed the Knicks would guard Trae Young—hammer him with double-teams and force the other players to knock down shots. Atlanta saw the fruits of their labor from implementing this strategy, considering Randle coughed up the ball three times due to the immense defensive pressure. Not only that, but having Clint Capela sag a few feet behind Randle’s primary defender cut off driving and passing lanes for the All-Star. Characteristically a game-changing facilitator, Randle dished out a mere three assists.

Unfortunately, Randle’s offensive struggles extended beyond his turnovers and lack of assists. But, as alluded to previously, the panic scale should be zero out of 10. Why? It simply wasn’t Randle’s night. Woeful 6-for-24 performances have been remarkably few and far between for the former Kentucky star this season. And many of the looks Randle got on Sunday were one’s he buries with ease, such as his patented mid-range fadeaway and three-pointers from the top of the key. It wasn’t a lack of confidence or assertiveness that dug Randle in scoring-wise.

Expect Randle to operate akin to the All-NBA player he is in Game 2. Having averaged 37.1 points per game against the Hawks in the regular season, Randle can torch Atlanta when at the top of his game. He wasn’t quite himself Sunday, though it’s safe to assume he’ll only continue to improve as this series progresses.