Trey Burke Was a Diamond in the Rough. What Happened Next? 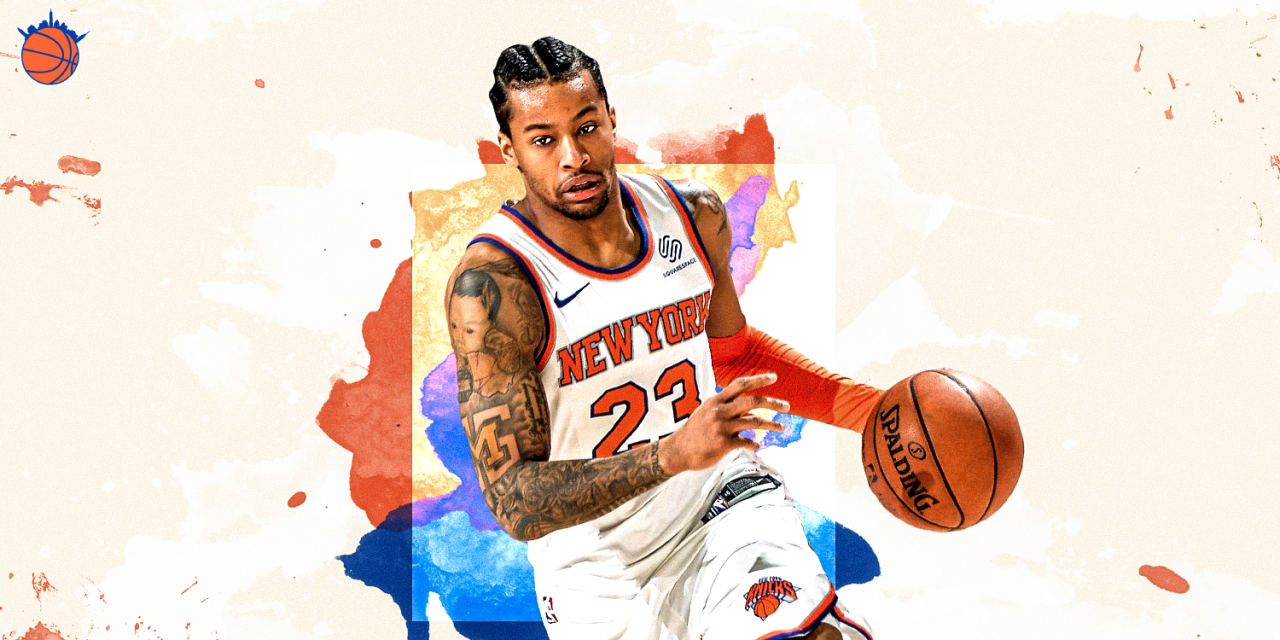 Trey Burke’s success story on the Knicks is reaching its resolution. A fine tale of sticktoitiveness, Burke and his abilities could find a new home before the trade deadline.

He was a monumental force next to Tim Hardaway Jr., Caris LeVert, Nik Stauskas, and Mitch McGary during the University of Michigan’s NCAA Tournament run in 2013, falling short to Louisville in the championship game. Then, after declaring for the draft, he was selected by the Minnesota Timberwolves at no. 9 before finding himself traded to the Utah Jazz.

The Knicks took a flier on the lottery talent and signed the former Wolverine to a G League deal in 2017. This experience reportedly “humbled” Burke, who fastidiously worked himself to the top of the development league and into a contract with New York.

Burke even impressed at times, specifically during his flame-throwing game against the Charlotte Hornets, in which he dropped 42 points and 12 assists. This begged the question: could Trey Burke be a valuable member of New York’s point guard corps. moving forward?

Well, the lead guard is suddenly out of the Knicks’ rotation after his previous stumbling in Salt Lake City and has only found minute due to Emmanuel Mudiay’s injury.

Burke didn’t play against Philadelphia or Washington, the latter matchup occurring in London, and he’s since garnered scattered minutes in games he’s dressed for—nearly 19 minutes in Los Angeles, only 12 and half minutes in Indiana, and four DNP-CD’s in between the nine games sandwiched between the aforementioned contests. Burke injured his knee after an awkward landing, and it sidelined the guard for six games in December.

Since his benching, however, Fizdale has needed the guard for backup duties following Mudiay’s shoulder injury and Frank Ntilikina’s promotion to starter. Burke had a scorching shooting night off the bench on Friday, scoring 25 points.

Inching closer to February—the trade deadline—it’s becoming apparent that the Knicks don’t have room for Burke on their roster. Mudiay has firmly locked up the starting point guard spot (despite his slump and recent injury), and Ntilikina is trying to develop his game with the second unit and starters with Mudiay away; Burke is nowhere in sight.

So, it begs some new questions: will Burke be in New York next season, and should the Knicks look to move him before the deadline?

Value to the Knicks

First, let’s quickly look at Burke’s value to the team. He’s a diminutive point guard—plainly a score-first guard, which isn’t a foreboding indictment in itself, but Trey isn’t necessarily talented enough to carry the scoring load each night. When he looks to drive, he often makes a U-turn and pivots to the free-throw line for a pull-up jumper.

According to Basketball-Reference, 75.5 percent of his field goal attempts are two-pointers and 22.1 percent of them are from 16 feet out to the three-point arc. Curiously, however, Burke’s highest percentage of shots from the floor actually come from downtown: 24.5 percent. Nonetheless, he’s only connecting on 34.2 percent of the threes attempted (better than his career average), and the rest of the league doesn’t view Burke as a deep threat, thus presenting obstacles in the paint which he has to speed past in order to get to the hoop.

He’s supposed to be a professional scorer as it were, but Burke is shooting a paltry 40.3 percent from the field, and his turnstile defense does indeed merit multiple benchings from head coach David Fizdale, and justly explains Burke’s absence from the rotation.

There’s a thin market for Trey Burke, specifically. Ostensibly, teams looking to strike deals with New York could receive Burke to match roster balance, sweeten the pot, or test the waters in a new location for Trey. The six-foot point guard could be waived, too. Undoubtedly, there is little to no room out there for deal constructed around Burke for an asset (like a future pick).

The Knicks would most likely give away Burke in a larger deal—perhaps a three-team one—that nets the ‘Bockers an expiring player and a pick. The Athletic’s Shams Charania has identified New York as one of the few major sellers approaching the deadline. Reportedly, the league is circling bait like hungry sharks, so this could stand to benefit the Knicks. Burke portends to be a solid third point guard for playoff-contending teams; he doesn’t need to be a reliable starter, but if called, Trey has the goods to run an NBA offense and create his own shot (that’s a lot to ask for in Knicksland, yes, but the team isn’t focused on further developing the 26-year-old).

Additionally, the New York Times‘ Marc Stein reported last week that Hardaway, Courtney Lee, and Enes Kanter could be gone by the deadline. Burke surely fits the same bill despite his little contract expense, so it wouldn’t be surprising to see the veteran paired with one or more from the aforementioned names shipped out by the Knicks.

Philadelphia appears to be a destination that works for Burke. There’s no need to crank up the NBA Trade Machine, but a quick glance and periphery knowledge of the current Sixers squad illustrates the need for an established, true lead guard. Philly, from their perspective, doesn’t have too much to offer other than their young players it’s bullish about like Landry Shamet and Furkan Korkmaz. Markelle Fultz, the former number-one overall selection, is still a mystery wrapped within an enigma, but the Sixers have multiple second-round picks in 2019 and 2020 that New York could desire.

The Detroit Pistons are on the fringe of the Eastern Conference playoffs, and last year’s Coach of the Year Dwane Casey could use a point guard, too. Squint hard enough and you can compare his All-Star guard in Toronto, Kyle Lowry, to Trey Burke. Don’t squint too hard, though. Detroit is subsisting on minutes from José Calderón, Ish Smith, and Langston Galloway—hey, two former Knicks! Perhaps the Pistons could part with their former lottery pick Stanley Johnson to begin the early stages of a conceivable deal. Ironically, Johnson is another 2015 draft mate of Kristaps Porzingis, Mario Hezonja, and Emmanuel Mudiay. Johnson was selected eighth by Detroit, one spot behind Mudiay, and could serve as another reclamation project for general manager Scott Perry and Fizdale. (Jabari Young, covering the Spurs for The Athletic, reported San Antonio was interested in Johnson and Detroit is losing a grip on its young wing.)

In the Western Conference, the Los Angeles Lakers are in desperate need of a point guard with Lonzo Ball sidelined up to six weeks, per ESPN. Maybe Burke doesn’t quite fit the prestige of purple and gold, but the other lead guards on that roster include Rajon Rondo (who’s also been hurt and just returned from a month-long absence), Alex Caruso, and raw, G League shuffling 6-8 Isaac Bonga. The Lakers are assuredly going to make a splash at the deadline; however, they could make a drop by trading for Burke instead of relinquishing young guys like Brandon Ingram, Kyle Kuzma, or Josh Hart to feverishly acquire win-now players. Burke could be a solid salve with Ball out until after the All-Star break.

Lastly, for vastly different reasons than contending, the Phoenix Suns remain a team that can sink its everlasting-rebuild teeth into Burke. The Suns’ guard Goof Troop is rounded out by rookies De’Anthony Melton and Elie Okobo. Phoenix could certainly be a destination for Enes Kanter to offload salary (maybe the Ryan Anderson to the Knicks rumors will come true, too, at long last). Nevertheless, Phoenix might be the toughest sell due to their influx capital of young player and meandering path towards competence (O.K., likewise with New York as well if we’re hurling insults). Dragan Bender could be a target for the Knicks if they send Burke and Kanter to the desert with Anderson and a pick coming to the Big Apple. In a vacuum, the trade checks out wherein the Knicks try out the feeble Bender before he becomes an unrestricted free agent since the Suns declined his 2019–20 option, and Phoenix relinquishes Anderson’s salary. The Knicks could search for another trade partner in the summer or waive Anderson when he transforms into an expiring.

In short, not easy, but it gives us a window into the short-term value of Burke and the not-so-seductive but necessary means for the Knicks to bite the bullet on salary while their young players plus their first-round pick in June develop together.

Burke isn’t exactly vital to the Knickerbockers’ future. He’s played well in spurts and given a few fond memories, but he’s evidently a player Perry and the organization does not have in their plans moving forward. On a nonguaranteed contract (which yielded him $500,000 after two calendar checkpoints in 2018), Burke could easily find a new home or be waived before the trade deadline next month, as the Knicks search internally for a third-string point guard. Kadeem Allen, ironically another G League call-up from White Plains, is with the team now and on a two-way deal that Allonzo Trier left unoccupied following his new contract agreement with the franchise when his 45 days expired. Allen has walked a different path into the NBA than Burke. The Arizona product is known for heady defense, for which Trey… is not known.

Burke was a commendable story about survival and humility and how to claw back in the league, but his time with the Knicks has passed. With that in mind, team president Steve Mills and Perry could take advantage of a readying buyers market and move Burke, and possibly Kanter, for expiring players and future picks that align with their organizational goals.